IPCNY is offering a comprehensive look at the art of paper. A medium exemplified in a multitude of imagery manifested into an excellent display of pulp’s many boundless possibilities. Curators Susan Gosin who is the co-founder of the paper-making studio Dieu Donné and Mina Takahashi, the editor of the journal Hand Paper-making put this inviting portrayal of papery pulp invention together presenting Paper/Print: American Hand Paper-making, 1960s to Today. It includes 65 artists, many of whom are icons of are our time.

The show focuses on printmaking, at a point when artists wanted to develop beyond the material found in shops. They were ready to make their own pulp happen in the broadest possible sense; shape its destiny in larger, unique surfaces and defined with colour and nuance by sculpting its identity into pretty cakes, as in Will Cottons “The Pleasure Principle”. Creating paper in new ways was a pivotal moment for print-makers that is uniquely American, “reinventing a craft and commercial process into an art form. The curators received strong support from over a dozen contemporary publishers, printers, and papermakers, including Brodsky Center, Dieu Donné, Durham Press, Gemini G.E.L., Lower East Side Printshop, Mixografia, Pace Prints, Two Palms, Tyler Graphics Ltd. ULAE, Wildwood Press, Women’s Studio Workshop and several others.” 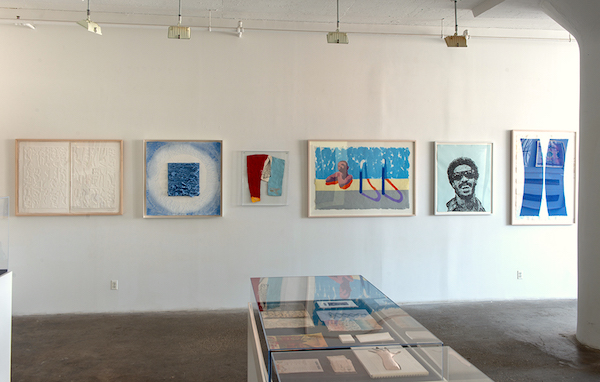 Though a little crammed into IPCNY’s not quite big enough space to hold the abundance of its mission, this extensive survey of dozens of works articulates the technical innovations of printmaking, while exercising the malleability of paper-pulp with visionaries using the medium to stretch their ideas through the intersection of paper-making and print. Paper-making is a thousands of year’s old skill, beginning in ancient Egypt with papyrus and later through the use of draining water from fibers the Chinese developed and refined the process further. It was in the United States that papermaking in conjunction with printmaking began creating artworks entirely of paper pulp and pouring color into it the mix, redefining the medium.

The many luminous artists in this show include: Richard Tuttle who was strongly involved in the wall that screamed Richard Tuttle making sure that the test model for The Missing Portrait artist book (a collaboration between Tuttle and poet, John Yau) of a crocodile stared from the wall down into the showcase at the finished book with crocodile astride the cover in muted sandy tones, which was flawlessly cunning. This is such a large show with so many outstanding artists if one pointed in any direction they would hit a star such as with William Kentridge’s watermarked Suite of three images in pigmented cotton linter/linen rag paper in its light table which the great artist made for this work. A lyrical signature of shape is scrolled across the pages. A fabulous Chuck Close portrait dubbed Janet/Pulp from 2007 smiles at the viewer with big cat eye glasses and chunky earrings stenciled pigmented on handmade paper. A standout white cast paper relief diptych by Louise Nevelson called Morning Haze from 1978 screams her name quietly, while David Hockney’s Gregory in the Pool (Paper Pool 4) from 1978 rests on another wall. The list of artists is superb Mel Bochner, Louise Bourgeois, Chakaia Booker, Leonardo Drew, Helen Frankenthaler, Ellen Gallagher, Jane Hammond, Robert Rauschenberg, Kiki Smith, Frank Stella among just a handful of the many artists to explore.