The British artist Patrick Heron (1920-99) will be celebrated in this retrospective exhibition, the first major show of his work for twenty years, which opened at Tate St Ives on 19 May and travels to Turner Contemporary this autumn. One of the most significant and innovative figures in 20th-century British art, Heron played a major role in the development of post-war abstract painting.

Spanning over fifty years of work from 1943 to 1996, the exhibition provides a rare opportunity to experience the scope and ambitious scale of Heron’s painting as well as his consistent attachment to the subject of colour. In 1962 he explicitly claimed that “colour is both the subject and the means; the form and the content; the image and the meaning, in my painting today.” Heron’s abstraction is a direct response to the light, colour and shape that he encountered every day. An art of pure visual sensation, his paintings are the result of his experience of looking acutely at the world, and though they do not represent the garden and landscape surrounding his home and studio in Cornwall, those forms resonate in his painting in fundamental ways. The exhibition is the first opportunity to bring together a group of these large-scale expansive works to Margate, revealing the full evolution of his vibrant abstract language, unlocking new insights into his art and encouraging the viewer — immersed in the rich aesthetic sensibility of his colour saturated paintings — to enjoy the simple and joyous act of looking. 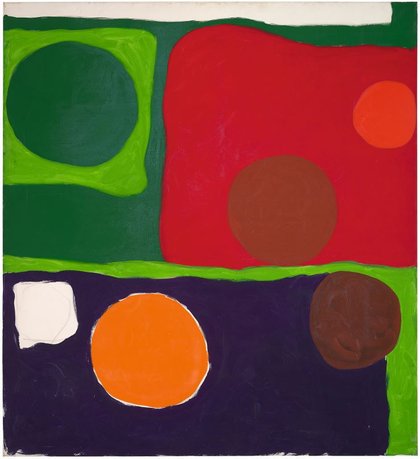 Rather than a conventional retrospective, with a chronological display, this show is a succession of spaces, juxtaposing works from the full breadth of Heron’s career to encourage a new understanding of his achievements as an artist.

An artist and a critic, Heron was central to debates in contemporary art since the 1940s. His recognition of the power of American abstract painting of the 1950s and 1960s was tempered by his unwavering attachment to the cultural values of European art found in the work of the French modern masters Paul Cézanne, Henri Matisse, Georges Braque and Pierre Bonnard, as much as his contemporaries such as Nicolas de Stael and Pierre Soulages, Peter Lanyon or William Scott. As an art critic in the 1950s for the American art magazine Arts, he introduced American readers to developments within British Art as well as offering a European perspective on American art.

Born in Leeds, Heron spent his early childhood in Cornwall, returning regularly after the mid-1940s, and moving permanently to Zennor, west Cornwall in 1956. He was foremost a painter, however during his career, he worked in a variety of media, from the silk scarves he designed for his father’s company Cresta from the age of 14 to a stained glass window for Tate St Ives in 1993. A selection of the drawings, monoprints and gouaches Heron made throughout his career, will form part of the exhibition at Turner Contemporary.