Following his debut exhibition last year, Paul Lock returns to the Noho Showrooms from 24 – 29 September with a new body of work, You Simply Are II.

The most beautiful thing we can do is to realise the simplicity of life. You simply are – Paul Lock

Lock throws down the artistic gauntlet by opening the exhibition with a gigantic self-portrait, making use of his signature face-mapping painting techniques. Bold and confident, Lock literally locks the viewer with his penetrating painterly gaze – deep Mediterranean pools delineating the artist’s piercing blue eyes.

Paul says, “Through the use of colour, line and shape, I love to challenge our perceptions. It is our perceptions that create our own realities, though our perceptions can only ever be subjective. As with art, our lives can never be taken for granted, nothing is finite, yet it is so easy to assume an absolute reality.” 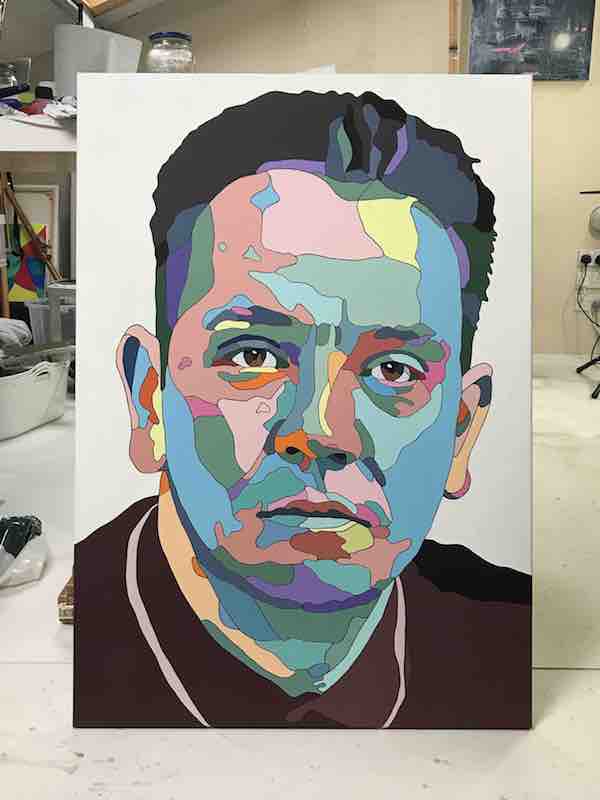 The portraiture theme continues in the bejewelled glowering Regina – a painting of HM The Queen – her exceptional features highlighted with hot pinks and flashes of azure. But what gives this iconic image an ironic and poignant twist are Lock’s other chosen subjects, three men who have all served at Her Majesty’s pleasure.

He explains, “When I’m not painting, I spend time with a social enterprise called Beyond Recovery, helping men in prison to overcome past trauma and addiction and to live a more peaceful and fulfilling life. I have seen some truly remarkable changes and want to share some of them with my audience.”

Celebrating the arduous journey to rehabilitation, Lock captures the essence of inner conflict by committing some of these men on to canvas. Staring back at the viewer, the resulting portraits depict all the subjects with the same attitude of defiance and determination. As one of the participants in prison put it, “I’ve struggled for years with anger and bitterness. I’m now free in my mind and I’ve never been this happy.”

In a nod to Elvis Presley’s song Jailhouse Rock, the troubled mind of a prisoner is further explored in Lock’s emotive image of “the King” crooning. The 1957 hit, released in conjunction with Presley’s motion picture Jailhouse Rock, follows the story of a young man sentenced to prison for manslaughter, who becomes a singing star when he gets out of jail. However, what Lock really seems to be alluding to is the prisoner Elvis became of his own mind – his stratospheric rise to fame resulting in addiction issues that ultimately cost him his life.

Other celebrity portraits fill out Lock’s exhibition, but also included is a simple study of his young daughter, her bright-eyed innocence scrutinising the world in front of her. Male and female nudes round off this comprehensive exhibition of stillness and light.

In Lock’s own words, “Many of us live in a world of endless stimulation, where we are constantly looking for the next thing to do. I invite you to stop, to be still and just be. The most beautiful thing we can do is to realise the simplicity of life. You simply are.”

Paul Lock is a contemporary British painter whose stylised portraits are capturing the imagination of buyers internationally. His approach to portraiture is engaging, sometimes subtle and often powerful: “I want to convey a likeness, but I also want to create a painting. A painting that recognises both the form and essence of the person while containing something of me, the painter.” After Lock’s successful debut solo exhibition last November, he is all set for his second exhibition, ‘You Simply Are II’ this coming September.

Born on July 19, 1975, in Kettering, United Kingdom, Paul Lock is predominately self-taught, picking up a paintbrush for the first time in 2012. During his initial years as a painter, he spent time with Keith Robinson (three-time BP Portrait Award, finalist). It was with Robinson that Lock recounts where his love for portraiture began. He immersed himself in his new-found passion and began creating his own individual and distinctive style. Lock currently lives and works in Surrey, United Kingdom.