Gallery 46 is presenting the first joint exhibition in London and first full collaboration by Paul Renner and Paul Sakoilsky. Working around themes of transformation, corruption and conservation, the show presents a banquet of the senses and a magic bullet for these dark times.

THIS IS THE GATE OF HEAVEN refers to the numerous doors of Gallery 46, where Renner & Sakoilsky show their latest art works. Here the artists traverse a multi-dimensional labyrinth within the gallery’s three 18th century terraced houses and a series of 7 specially created rooms 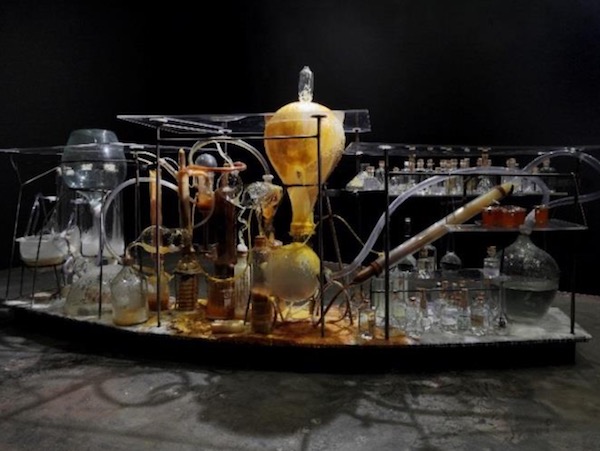 Renner creates environments where the aesthetic takes on the infinite, where all divisions collapse and the six senses fuse into one. His method is anarchic, subversive and experimental, following William Blake’s words: ́The road of excess leads to the palace of wisdom’. And if it doesn’t, so much the better.

Sakoilsky’s darkly humorous, subversive media hijackings of his potlatch newspaper ‘The Dark Times’ sit alongside the iconography of expressive cityscapes, at once banal and cosmological, revealing the barbarity and beauty of contemporary London. And a series of still lifes accords with another of Blake’s notions – the glimpsing of Heaven in a grain of sand.

The artists first met working for the Viennese Aktionnist, Hermann Nitsch, in his Orgien Mysterien Theater. At the core of both their work is a vital, sensual and conceptual engagement with the world, embracing travel, arcane histories, pataphysical realities, and a shared fascination with historical and contemporary artwork, as well as the literature of the ‘anti-tradition’. Renner and Sakoilsky have exhibited and collaborated in past group expositions, most recently, ‘Transformazione’ at the Palazzo Ducale, Massa, Italy (2017).

THE GATE OF HEAVEN ROOM contains a hybrid and collaborative extension of Renner’s The Hell Fire Touring Club and Sakoilsky’s The Gate to Heaven artworks, (incorporating his LSD Capri nonstop, Napoli 2013, with a new large ‘celestial’ painting.

THE DARK TIMES ROOM is totally ‘decorated’ with Sakoilsky’s The Dark Times ‘newspapers’ and related works. This includes works from 2007 until the present time.

THE LONDON PAINTINGS ROOM shows Sakoilsky’s oil paintings of London cityscapes. Hung salon style, selected from a body of paintings made over the past decade with an emphasis on the more recent work such as the ‘138 Balfron’ series, painted from his ex-studio on the top floor of Goldfinger’s Brutalist tower in East London. Including related writings.

THE BOURGEOIS-COCKNEY FINISHING SCHOOL BAR is a hybrid of Renner’s Bar & Food Installations and Sakoilsky’s Still Life paintings. This is the site of selected manifestations and readings and a place to relax in an atmosphere of terminally weird luxury. It is an environment in which the themes of heaven, hell, earth, transformation, corruption and conservation coil about each other in an air of heightened reality.

THE OYSTER ROCKET SCULPTURE is a ziggurat of oysters and alcohol from which Renner launches and celebrates his gastronomical theatre.

Paul Renner and Paul Sakoilsky ‘THIS IS THE GATE OF HEAVEN’