In her first solo exhibition in London, Caroline Coon is ‘The Great Offender’, displaying her large scale, didactic paintings at TRAMPS, from September 29th 2019.

Artist, writer and activist Caroline Coon is one of the towering disappeared women of her generation – MEB

Curated by Peter Doig and Parinaz Magadassi, the exhibition includes artworks spanning the 1980’s to 2019, demonstrating how Coon, in her explicit social and political commentary, has made art that rebels against binary conceptions of gender and challenges orthodoxy in ways that are particularly relevant today. The exhibition will travel to TRAMPS, New York, in Spring 2020.

When Peter Doig, a long-time admirer of Caroline Coon’s paintings, realised that The Great Offender at The Gallery Liverpool in 2018 (curated by DuoVision), was her first-ever solo exhibition he decided, with Parinaz Mogadassi, to bring the show to TRAMPS in London. 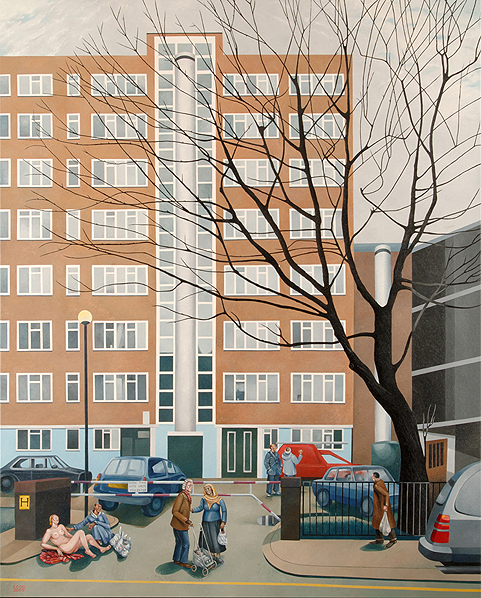 Peter Doig believes that over her lifetime Caroline Coon has created a challenging, significant body of work, “that really needs to be seen by a large audience”, paintings that are “brave, beautiful and sensitive”.

Art historian, Maria Elena Buszek, in her catalogue essay for the exhibition, writes: “Artist, writer and activist Caroline Coon is one of the towering ‘disappeared’ women of her generation; she was a catalyst and witness to some of the most critical moments of art, music, and politics, only to see her participation muted and marginalised, and her male contemporaries canonised. Much has been said about her ground-breaking journalism for Melody Maker magazine (no less an expert than John “Rotten” Lydon to this day credits her with coining the term “punk rock” in the UK) and as the one-time manager of The Clash. However, Coon’s history as a feminist painter and activist remains under-analysed. Where it has been addressed, the focus has been on the controversies that have often surrounded her life and work—and while these responses have their roots in her willingness to speak truth to power, they have overshadowed the woman and the work itself. As such, it is long past due for Coon’s work to be understood and respected as both part of the broader western Feminist Art Movement from which she emerged in the late 1960s, as well as on its own terms for her stubbornly unique vision that has continued into the 21st century.”

Curator Parinaz Mogadassi says: “Caroline Coon’s paintings transcend her biography. They are as rich and complex as the life she has lead. Standing alone, however, these works speak from themselves. There is no need to qualify or contextualise. She is a maverick, and her works a marvel.”

From September 29th 2019 Caroline Coon The Great Offender will be in at TRAMPS, 15f Micawber Street N17TB, presented and curated by Peter Doig and Parinaz Mogadassi in collaboration with DuoVision.