A full scale exhibition of the Photorealist painter Richard Estes born 1932 covering the last 35 years of his career will be presented at Damien Hirst’s Newport Street Gallery in London in September.

The celebrated American artist’s work will include 45 paintings. “I am thrilled to be able to bring Richard Estes’ first retrospective to the UK. Richard is a living icon of American painting and this will be a rare opportunity to see his mesmerizing works in person,” said Damien Hirst. “I’ve loved his work since I was shown it when I was 13 by my art teacher in high school.

While trends and movements have come and gone, Estes has stayed true to his vision and singular approach to painting for more than fifty years. His unwavering commitment is a true inspiration. While Estes is best known for his paintings of New York, the London show will also feature paintings made following trips to Europe, Asia, Africa and Antarctica. “While Richard’s much-loved paintings of New York will be central to the show, the lesser-known works made from his travels around the world are a revelation and I’m super excited to include them in his show and to be helping to give a broader understanding of Richard’s work to a British audience,” said Hirst. 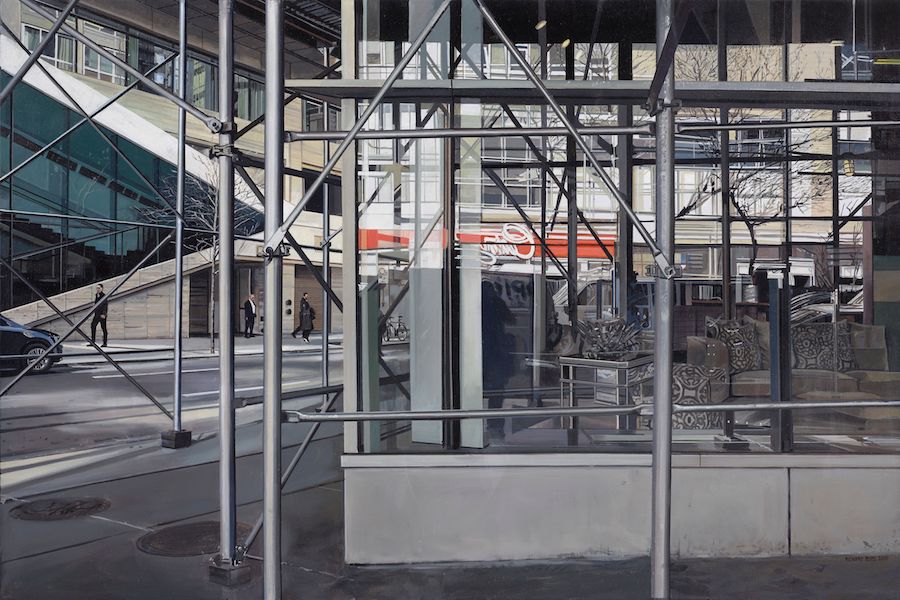 Richard Estes’ last European retrospective was held at El Museo Nacional Thyssen-Bornemisza in 2007. Most recent US retrospectives were organized jointly by The Portland Museum of Art in Portland, Maine and The Smithsonian American Art Museum in Washington, DC –both curated by Patterson Sims who is writing for the NPSG catalogue.

Richard Estes is the standard-bearer of photorealist painting and its most devoted and accomplished practitioner. His work is defined by a profound commitment to the quotidian truths of his depictions. Of equal importance is his unique creative process in which repeated observations coalesce into an image in his mind. The painting of that image represents a vision within his subjective reality. Over the last half-century, the rare integrity of his process has unveiled a true understanding of the world around us, even

As cities, landscapes and rituals change – slowly and steadily, then all at once. As the pendulum swings back from abstraction and realism recapture the imagination, Richard Estes place is secured as one of the leading painters of the 20th century. His body of work includes his interpretations of timeless, pristine images of New York City as well as his many adventures in travel.

Located in Vauxhall, south London, Newport Street Gallery presents exhibitions of work from Damien Hirst’s art collection. Exhibitions vary between solo and group shows and admission to the gallery is free.
Newport Street Gallery is the realization of Hirst’s long-term ambition to share his art collection with the public. Designed by architects Caruso St John, the gallery spans 37,000 square feet and includes six exhibition spaces – one with a ceiling height of 11 meters– split over two levels. The Murderme collection, which Hirst has been acquiring since the late 1980s, contains over 3,000 works. Featured artists include Francis Bacon, Banksy, Tracey Emin, Richard Hamilton, Jeff Koona, Sarah Lucas, Pablo Picasso, Richard Prince, Haim Steinbach and Gavin Turk, as well as a number of young and emerging artists and a significant collection of indigenous artists from the Pacific Northwest Coast. Also featured are natural history specimens, taxidermy, anatomical models and historical artefacts. The collection has previously been the subject of large-scale exhibitions at the Serpentine Gallery, London (2006) and the Pinacoteca Agnelli, Turin (2013).