Art Riot: Post-Soviet Actionism, is a new exhibition dedicated to Post-Soviet Union protest art over the past 25 years. This is a world premiere for protest artists Pussy Riot and Pyotr Pavlensky. Alongside this exhibition, award-winning theatre group Les Enfant Terribles will present Inside Pussy Riot, a groundbreaking immersive theatre experience including performances by founding Pussy Riot member Nadezhda Tolokonnikova.

Taking place 100 years after the Russian Revolution, Art Riot: Post-Soviet Actionism explores issues such as challenges to individual freedom of expression in the face of both political ideology and religion. While it does not have direct links to the Revolution, many of the problems that artists face in Russia today are comparable to those in 1917 such as persisting government censorship and police intervention.

The exhibition will feature work by performance artists including Oleg Kulik, Pussy Riot, Pyotr Pavlensky, Blue Noses Art Group, Arsen Savadov, AES + F, Vasily Slonov, and will display various genres and types of protest art, from posters and slogans to video art, staged photography and performances. These practices are in response to a crisis where artists face shrinking freedom yet have an even more urgent need for expression. 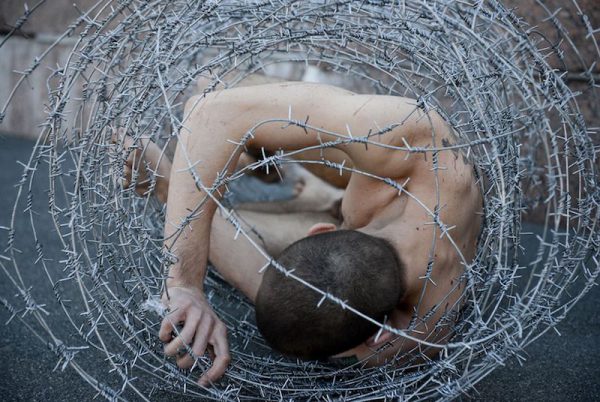 Pyotr Pavlensky practises actionism, an art form with a rich history in Russia

Art Riot: Post-Soviet Actionism raises crucial questions about artistic freedom, exploring what it means to be an artist in the Post-Soviet Union today. Curated by Marat Guelman, it marks the fourth exhibition presented by the Tsukanov Family Foundation in partnership with Saatchi Gallery. Previous blockbuster shows this cooperation were Breaking the Ice: Moscow Art, 1960-80s (2012-2013), Post-Pop: East Meets West (2014-2015) and Revelations (2016).

As part of Art Riot: Post-Soviet Actionism, Tsukanov Family Foundation have teamed up with the award-winning theatre group Les Enfant Terribles, who have collaborated with Pussy Riot’s Nadya Tolokonnikova to present Inside Pussy Riot, a breakthrough immersive theatre experience, co-produced by Alexandrina Markov (Bird&Carrot) that will take place during the exhibition’s run at Saatchi Gallery.

The production tells the story of Pussy Riot’s arrest and imprisonment following their 2012 performance inside Moscow’s Cathedral of Christ the Savior. Two of the group’s members Maria Alyokhina and Nadya Tolokonnikova were convicted of “hooliganism” and sentenced to 2 years in a labour colony, rising to worldwide notoriety as a result and becoming a symbol of defiance.

Oleg Kulik ranks among the most interesting and controversial Russian artists. He has managed to attract the attention of art critics and exhibition curators by his performance shows, which are characterised by “strong expression” where he assumes a role of “artist-animal”. In these performances Kulik becomes a dog, a bird, a fish, and a bull, simplifying his performance language to the basic emotional vocabulary of an animal.

Pussy Riot is a Russian feminist protest punk-rock group founded in 2011. The group staged unauthorised performances in unusual public places, such as the Red Square and Moscow’s Cathedral of Christ the Savior, which were then made into music videos and distributed via social media networks. The collective’s lyrical themes included feminism, LGBT rights, and opposition to the oppressive policy of the Russian President Vladimir Putin. In 2012 two of the group members, Nadezhda Tolokonnikova and Maria Alyokhina, were arrested and sentenced to two years’ imprisonment. 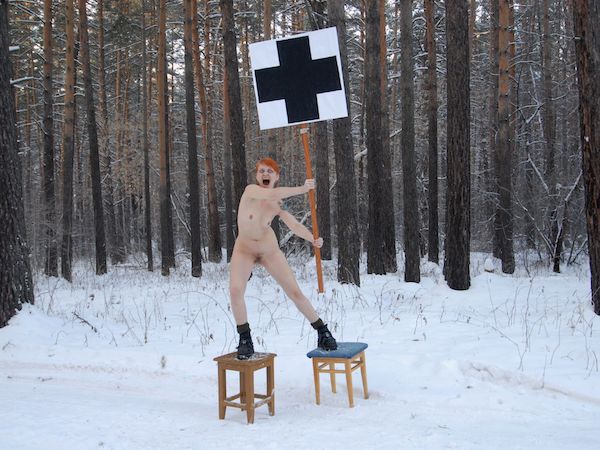 Pyotr Pavlensky practises actionism, an art form with a rich history in Russia. He calls his particular brand of actionism “political art”, and since emerging in the public eye in 2012 has produced a string of profound performances. Pavlensky sewed his mouth shut (‘Stitch’); rolled naked in barbed wire (‘Carcass’); sat naked on Red Square and nailed his scrotum to the cobblestones as a metaphor for the “apathy, political indifference and fatalism” of modern Russian society (‘Fixation’); and set the doors of the Russian Security Services (FSB) headquarters on fire (‘Threat’).

“Razor sharp theatre group Les Enfants Terribles” (The Daily Telegraph) is one of the most innovative and exciting theatre companies working today. Their work includes award-winning, international stage shows such as The Trench and The Terrible Infants, ground-breaking immersive work like Alice’s Adventures Underground and The Game’s Afoot, innovative outdoor touring work such as The Marvellous Imaginary Menagerie and large-scale public events for the likes of Save the Children, the British Library and the V&A. The Terrible Infants will be playing at Wilton’s Music Hall from 27th September to 28th October 2017.

Founded in 2001 by Artistic Director Oliver Lansley, Les Enfants Terribles has established a large and loyal following for its unique work, performed all over the world as well as building a large and loyal UK touring audience. In 2012 Les Enfants Terribles formed sister children’s company Les Petits Theatre with a focus on taking well-known children’s literature and bringing them to life on stage in creative and exciting ways.

The Tsukanov Family Foundation (“TFF”) is a UK charity supporting the education of talented children from the Former Soviet Union countries. It extends scholarships to a number of the leading schools in the UK, including Eton College, St Paul’s Girls’ School, the Royal College of Music, and the schools of Alpha Plus Group. TFF has worked for years with leading Russian museums, including the Tretyakov Gallery (for which the Foundation has financed acquisitions on an annual basis), the Moscow Multimedia Art Museum and Moscow Museum of Modern Art. TFF owns one of the world’s largest collections of post-war Russian art.  The Foundation’s other affiliations include the National Russian Philharmonic Orchestra, the London Philharmonic Orchestra (LPO) and the Royal Opera House.

Inside Pussy Riot runs from Tuesday 14th November – Sunday 24th December and tickets are priced from £21.50. For more information and to book tickets visit http://www.insidepussyriot.com