Ralph Dunn and Ryan Riddington are two talented emerging UK based artists. Their practice explores sexuality within their work in very different but complimentary ways. Both artists’ work is conceptually based and is not figurative in an obvious way, the viewer needs to investigate the pieces to see their queerness, in both senses of the word. The exhibition falls within the international Pride month.

The viewer needs to investigate the pieces to see their queerness, in both senses of the word

Dunn presents three works including Doormat, which welcomes the viewer into the MOCA space. It is as its name suggests, a seemingly ordinary doormat made from coconut fiber as can be found in homes across the country. However, instead of saying – Welcome – it suggests to the viewer a quick oral sex encounter by someone who might want to be treated as a doormat. Similar sexual want ads can be found on the internet and there are many gay sites where interested parties can meet. To the immediate right, Dunn’s new work Aroma is on the inside of the gallery’s external glass frontage. There are three rows of words such as Rave, Deepend Bang. Many viewers might not have any idea of how these words work as a totality, it could be a concrete poem, or as is the case, the names of various ‘Popper’ brands. Amyl Nitrate is a liquid sniffed by many who engage in anal sex as it is a muscle relaxant. The names are reflected in Dunn’s So Messed Up. This work is a mirror which Dunn has hand etched with words that perhaps form a plea to an absent lover, or suggest a longing for an encounter. The works reflect and are in dialogue with each other, as well as with Riddington’s works. 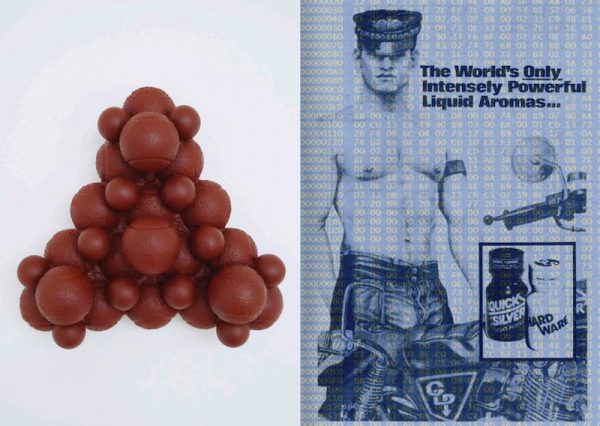 Riddington has made a series of Cloaca works, which are both in two and three dimensions. The three brown sculptural objects are mounted on the gallery walls and are in the shape of triangles or a square. Each object is made up of a group of tennis and ping pong balls covered with many layers of paint. At first view, the game balls are hard to distinguish as such and appear more like atoms and protons bound into some new form of the element not yet found on the Periodic table. Perhaps they are the molecules of sex and desire, or even the opening of the digestive tract as found in mammals. The word comes from the Latin to clean or drain and is often used in conjunction with or is a term for a sewer. In the works that are photographic, we see the artist’s hand supporting or entering the works and the tension between the two and three-dimensional versions jumps out at the viewer. Perhaps they too can touch these seductive objects or maybe they are repulsed by the idea. But it will cross their minds. He also presents two tiny acrylic paintings on toilet paper called Clags. Each Clag explores the geometry of the design on the paper which on a much smaller scale looks like his sculptural works. His choice of colour (brown and a rusty red) cannot but be read as references to bodily fluids and solids and return us to our physical selves. 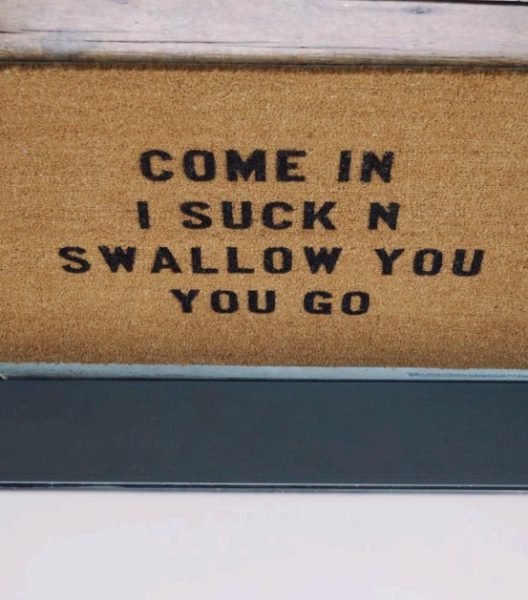 Both artists ask what it is to be human, what are our desires, and how is it that some are sanctioned and others are glorified. Who is to say what pleasure is or how it might be found? The looking glass is always the reverse of the true picture of ourselves as others see us. The artists’ works suggest we can never really know ourselves, our desires, or where they originate, only that we must embrace them.