When an exhibition celebrating 800 years of spirit and endeavour at Salisbury Cathedral has to be installed against the clock and then its launch is halted by the COVID-19 lockdown, first emotions are primarily of devastation.

The exhibition lives anew, to bring hope and delight in a time of trouble – Dr Robert Titley, Canon

Three years in the planning, Celebrating 800 years of Spirit and Endeavour brings together work from some of the most significant artists of the 20th and 21st century, including Antony Gormley, Shirazeh Houshiary, Henry Moore, Grayson Perry and Mark Wallinger. These are shown alongside work from the Cathedral’s own permanent collection including Elisabeth Frink, Barbara Hepworth and Helaine Blumenfeld.

The exhibition was a major commitment on the part of the Cathedral for its anniversary year, so lockdown was a bitter blow but, in the spirit celebrated by the exhibition, one they were determined to overcome.In response a virtual exhibition was created which launched eight centuries to the day after the first foundation stones of this magnificent building were laid and just over a month after the real-life launch was halted by the COVID-19 lockdown. 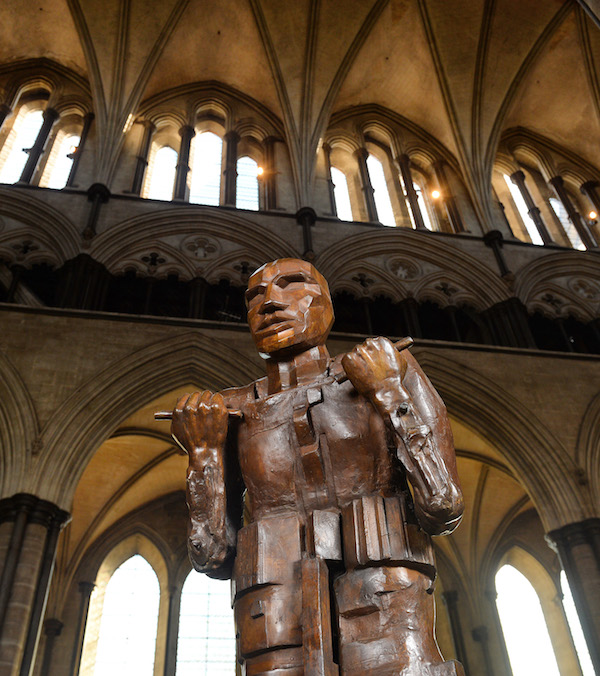 As Dr Robert Titley, Salisbury Cathedral’s Canon Treasurer and Chair of the Cathedral’s Arts Advisory Committee has said: “Christianity is a religion of redemption and salvation. We planned this exhibition to celebrate a landmark birthday for our Cathedral and city but the coronavirus overtook us. Now – thanks to this virtual realisation – the exhibition lives anew, to bring hope and delight in a time of trouble, passing through the closed doors of isolation and lockdown. It’s a sign of what is possible when the Spirit of God fuels human endeavour.”

The exhibition was conceived as a celebration of the human spirit and human endeavour, manifested through the faith and skill that drove the original builders of the Cathedral and their community on. Salisbury Cathedral was built 800 years ago, taking only 38 years to complete. As a magnificent gothic building set in the UK’s largest Cathedral Close, it is one of the world’s iconic works of architecture.

Seeking to embody the spirit, ambition, faith and endeavour that brought about the construction of this magnificent Cathedral, the exhibition is about how humankind can be, and how we can be inspired to greatness, whether it is Stanza’s life-sized data visualisation sculpture, The Reader, or Gormley’s GRIP (Net), a delicate figure, a three-dimensional drawing that trembles in space, raised above us to stand 14 metres above the Quire, at the heart of the building.

Stairway by Danny Lane (Top Photo) steps heavenwards, climbing ambitiously skyward in line with the Spire, reminding us of Jacob’s Ladder, set up between heaven and earth. Shirazeh Houshiary’s String Quintet, an evocation of sound waves with their varying flow patterns, reference the music that is central to Cathedral life, while other works, like Craigie Aitchison’s Crucifixion, explore overtly Christian subject matter, addressing the faith that inspired the Cathedral to be built and that has sustained it ever since. 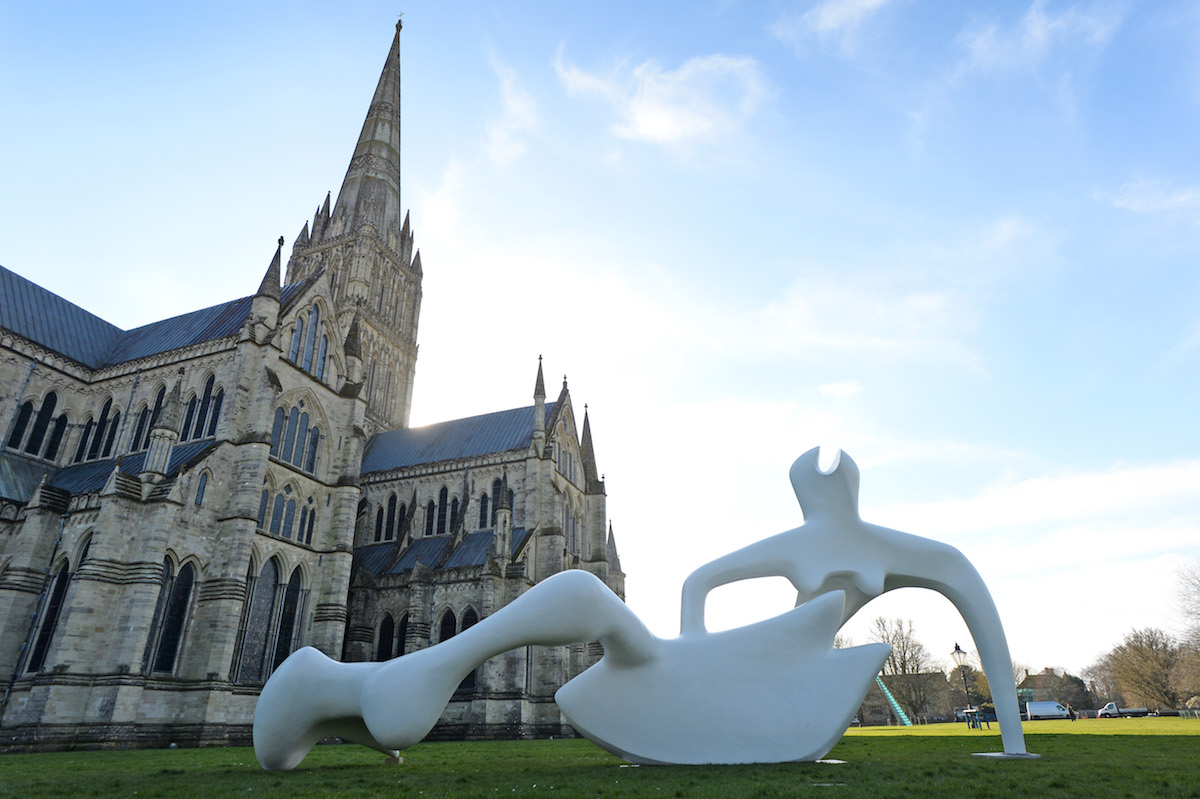 On the North Lawn, Henry Moore’s monumental Large Reclining Figure, one of the best known and most iconic examples of Moore’s fascination with the reclining female ﬁgure, becomes more poignant when juxtaposed with the Cathedral, which is dedicated to Mary, the Blessed Virgin.

The fragility of our lives is also contemplated, particularly with the 4.8-metre high When Soak Becomes Spill by Subodh Gupta (installed on Chorister’s Green) and Youki Hirakawa’s A Candle, a poetic video installation that reflects (in the artist’s words) ‘the way that time seems to be leaking in the chaos of the modern world’.

This collection is being shown alongside sculptures including Walking Madonna by Dame Elisabeth Frink, Construction (Crucifixion): Homage to Mondrian by Dame Barbara Hepworth and Angels Harmony by Helaine Blumenfeld from the Cathedral’s own permanent collection. Hepworth’s Crucifixion, when first installed in 1969, was controversial – being daubed with paint and having a bomb, which did not go off, lodged under its base. Its inspiration is nevertheless clearly found in the Christian Science beliefs which were significant for Hepworth throughout much of her life. 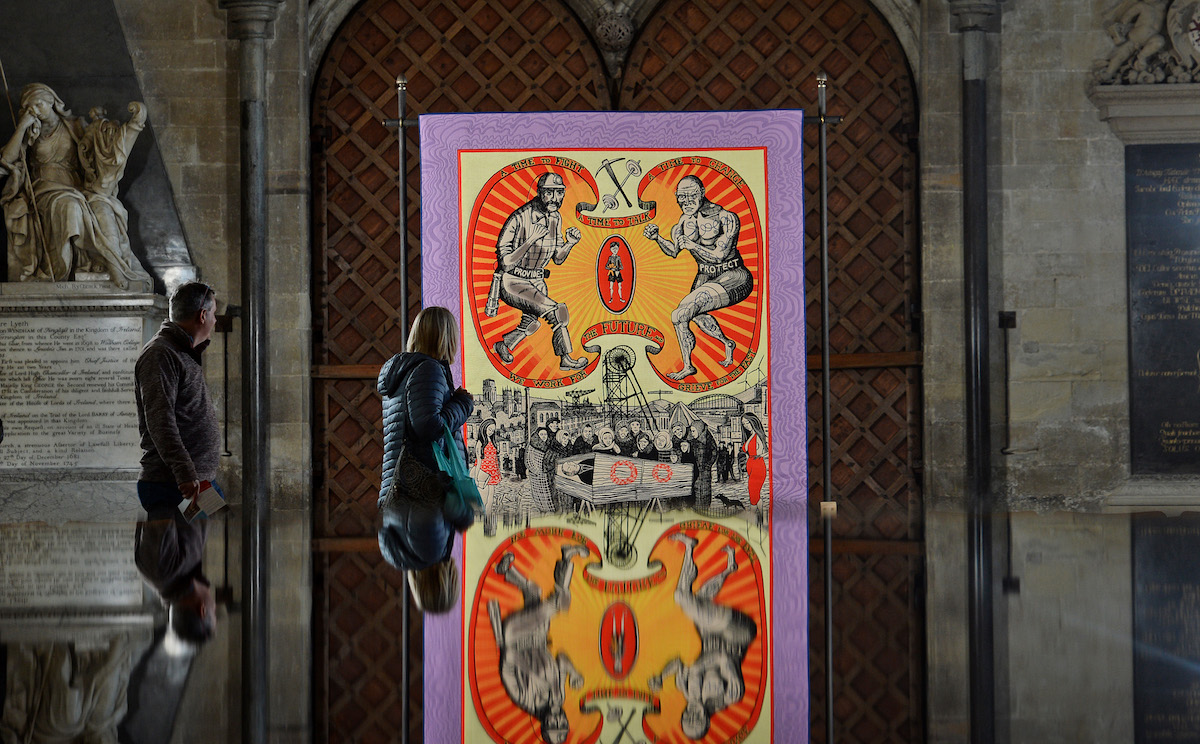 Aspects of the Cathedral’s life over the centuries are explored by works like Lynn Chadwick’s Sitting Couple on a Bench and Grayson Perry’s Death of a Working Hero, which recall the working men and women who built the Cathedral and the families that made up its community. Martin Creed’s Work No. 2663 MUMS DADS KIDS GODS playfully adds ambiguity into the mix of reflection on familial and societal relationships. Daedalus by Eduardo Paolozzi, the legendary craftsman cast in bronze from prefabricated aluminum and brass casting moulds, speaks to the real craftsmen and women, who restore and repair the work of their forerunners.

Among these works, Ernst Blensdorf’s Annunciation also receives a welcome focus. Blensdorf, an under-appreciated sculptor, arrived in the UK after twice fleeing the Nazi’s. His passionate belief in world peace had put him at odds with the Nazi regime and, in 1933, he became one of the first German artists to be branded ‘degenerate’. Settling in Bruton in 1941, he used Somerset Elm to crate fluid free flowing, abstracted forms. Annunciation creates a marvellous fusion of the one calling and the one called until, as Edwin Muir suggests, ‘each reflects the other’s face’ with heaven shining steady in Mary’s face and earth in Gabriel’s.

New works have been commissioned from Bruce Munro and Daniel Chadwick in line with an Arts Policy that seeks to use the medium of visual art to inspire and allow contemplation of works of art in a sacred place. Sandy Nairne notes, in a catalogue essay, that the ‘imaginative visual arts programme at Salisbury Cathedral … aims to present contemporary art ‘which engages, encourages spiritual development and at times challenges’, and to ‘open up conversation and explore… questions of our shared Humanity.’ 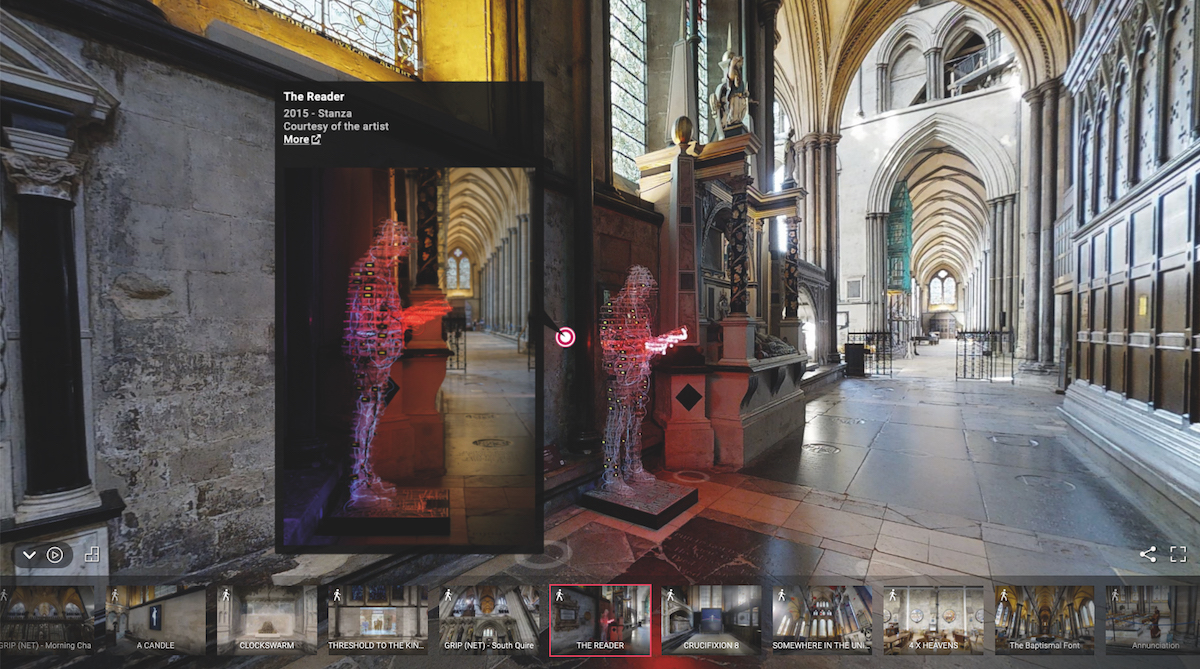 Virtual exhibition images from Patrick Price Heads above the Cloud – The Reader by Stanza, Salisbury Cathedral

Accordingly, exhibition curator Jacquiline Creswell, says: ‘My most fervent hope is that the exhibition allows us to contemplate what it is that empowers people to harness their strengths, to find their voices and feel addressed, to echo the effort and achievement made by the ordinary people who built a city and a Cathedral of such distinction.’

Churches have employed the visual arts for centuries, to celebrate their faith and communicate their history, whilst offering a critique of that faith. Art has the power to attract, engage and encourage people who are both within and outside the formal structure of faith, belief and belonging. Within this context, such engagement offers new perspectives; challenging conventional orthodoxies, provoking dialogue and debate.

The Cathedral normally welcomes more than 250,000 visitors every year, who come to marvel and experience the special atmosphere of this unique environment. Imbuing the online exhibition tour with as much of the awe and wonder that the original exhibition evokes in this special sacred space was a major challenge, but is one that the team has achieved.

Creswell says, ‘It does strike me as profound that commemorating the placing of a stone 800 years ago, something so physical and monumental at the time, is now taking place on a virtual, online platform – something the original Cathedral builders could not have imagined.’

Celebrating 800 years of spirit and endeavour is now no longer just about the exhibition and the works included, but also the story of how shared humanity and capacity to create and endure has been expressed in the response those involved have made to the constraints of lockdown. In this way they have not only celebrated 800 years of spirit and endeavour, but have added a new chapter to that story. As Creswell says, whether online or offline, ‘this exhibition encourages viewers to look forward with hope.’