In October 2018 the Hepworth Wakefield launches the second Hepworth Prize For Sculpture exhibition. This year’s shortlisted artists are Michael Dean, Mona Hatoum, Phillip Lai, Magali Reus and Cerith Wyn Evans. Each artist has created a new work for display in the exhibition.

Launched in 2016 on the occasion of The Hepworth Wakefield’s 5th birthday, this £30,000 biennial award was established to recognise a British or UK-based artist of any age, at any stage in their career who has made a significant contribution to the development of contemporary sculpture. The 2016 prize was awarded to Helen Marten.

Simon Wallis, Director of The Hepworth Wakefield, said: ‘We created the Prize to encourage wider engagement and debate regarding sculpture – one of the most significant and rewarding visual art forms of our time. The breadth of work that will be on display explores the distinct approach to sculpture taken by each artist and it will allow our broad audience to experience the engaging richness of this powerful art form’. 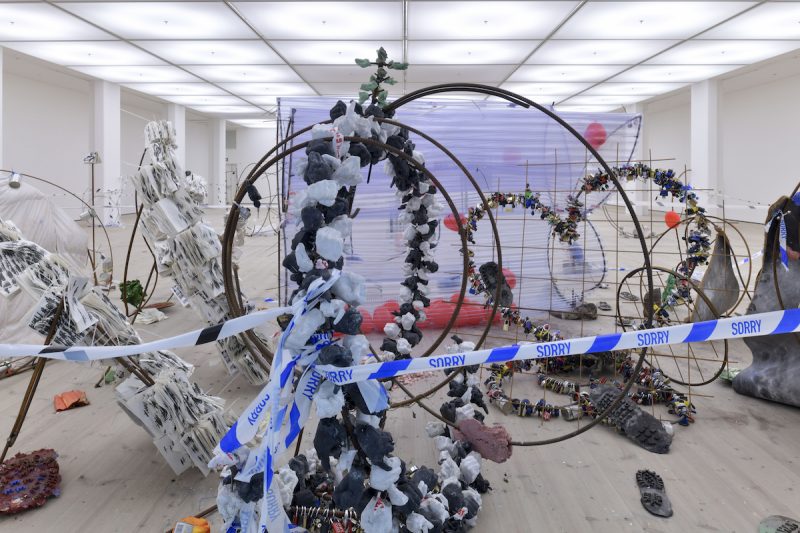 the Hepworth Prize for Sculpture 2018

Michael Dean (b 1977) will present a new installation extending the investigations of his most recent work. Dean’s sculptures begin with his writing, which he translates into physical form – from letter-like human-scale figures in concrete and steel reinforcement to self-published books deployed as sculptural elements. His sculptures confront viewers with what he describes as ‘moments of intensity’ made from the matter of contemporary life – including doctored detritus, basic building materials, coins, crime scene tape, padlocks, and, most recently, the three-day food bank emergency allowance currently provided to a family of four in the UK.
Michael Dean was born in 1977 in Newcastle Upon Tyne and now lives and works in London.

In 2016, Dean was nominated for the Turner Prize and in 2017, he exhibited as part of the fifth edition of Skulptur Projekte Münster. In 2018, Dean will have a solo show at BALTIC Centre for Contemporary Art, Gateshead. In 2019, he will have a solo exhibition at the Museo Tamayo, Mexico City.

Mona Hatoum (b1952) will show two new sculptures alongside significant earlier works, revealing the breadth of her explorations of contradictions and conflicts. Hatoum’s sculptural projects use reduced physical means and shifts of scale and materials to destabilise our perceptions. In the new work Orbital 2018, the artist transforms reinforcement steel into a globe encrusted with meteor-like clumps of rubble, resulting in a work reminiscent of demolished buildings. Hot Spot (stand) 2018 is a new reimagining of Hatoum’s iconic neon globe, where the whole world pulses with conflict.
Mona Hatoum was born into a Palestinian family in Beirut, Lebanon in 1952 and has lived in London since 1975.

A major touring exhibition with over a hundred works from the late 1970s to the present was on display at the Centre Pompidou, Paris (2015), Tate Modern, London and KIASMA, Helsinki (2016). In January this year, Hatoum received the Whitechapel Art Icon Award. 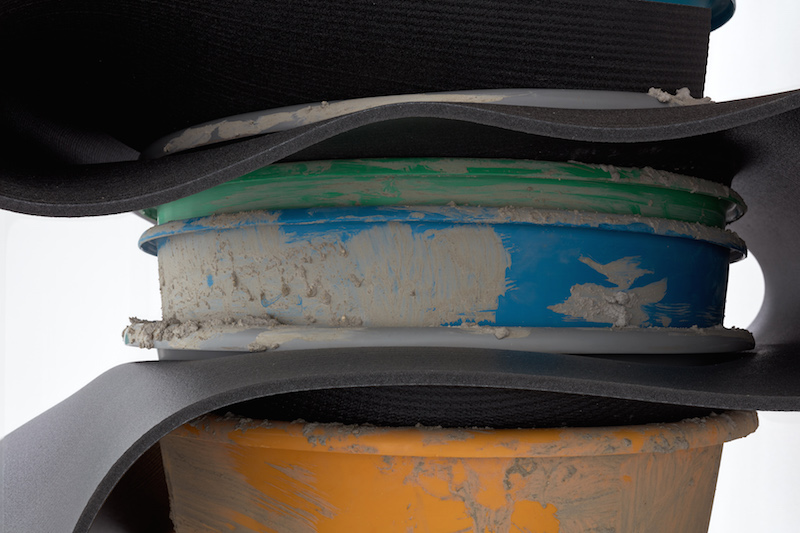 Phillip Lai (b1969) will debut a group of new sculptures alongside his 2016 work Guest loves host in a way like no other. Using existing mass-produced objects as well as his own precisely fabricated forms, Lai’s surprising and poetic arrangements investigate ideas of production, consumption and hospitality. A major new work consisting of a series of stacked cast polyurethane basins will unfold across one long wall of the gallery space. Lai describes these objects as images of an ‘absurd expenditure of labour’, their accumulation invoking both the protracted processes of the artist and the construction activity implied by their cement-marked surfaces.
Born in 1969 in Kuala Lumpur, Malaysia, Phillip Lai lives and works in London.

His recent solo exhibitions include Besides, Camden Arts Centre, London (2014) and Transmission Gallery, Glasgow (2009). He studied both MA and BA Fine Art at Chelsea College of Art and Design in London. 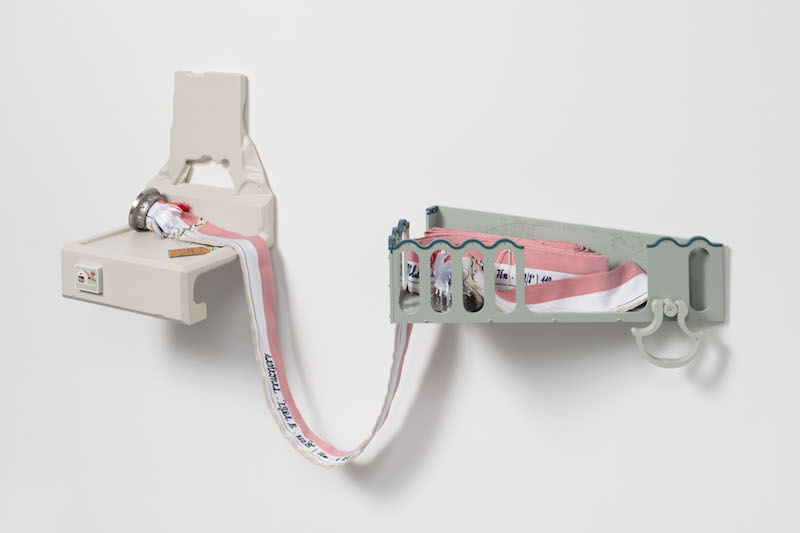 Magali Reus (b1981) will present an installation of new sculptures alongside an architectural intervention in the gallery space. Reus’ works hint at functionality but present a material reality detached from any specific purpose. New works from Reus’ series Sentinel combine references to woven fire hoses and nozzles with more amorphous elements cast in fibreglass with metal appendages. Reus will also present four works from a new series, Dearest, which incorporate re-imagined ladders, hats and bottles in sculptural configurations that cast them as protagonists in the delivery of a romantic serenade.
Magali Reus was born in Den Haag, The Netherlands in 1981, and currently lives and works in London. In 2015 she was awarded the Prix de Rome.
This year she had a solo exhibition at the South London Gallery. 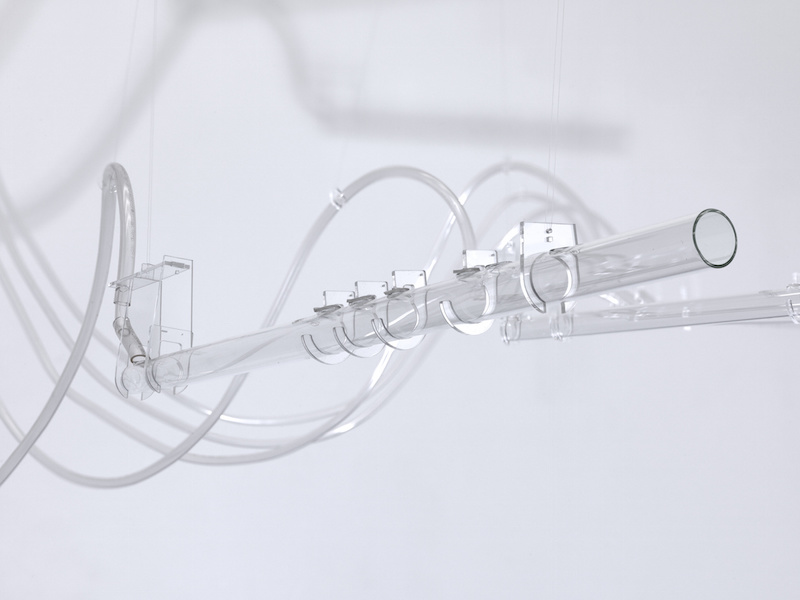 Cerith Wyn Evans (b1958) will debut a major new work comprising two intersecting arcs of glass crystal musical flutes suspended in the gallery space. Powered by two mechanical lungs that inhale and exhale according to a specially-conceived algorithm, the 40 flutes are individually pitched to perform Wyn Evans’s new composition. Wyn Evans often incorporates sound into his work and orchestrates his installations within architectural structures to influence the audience’s spatial experience. His interdisciplinary and multi-layered practice fuses intellectual rigour with poetics.
Cerith Wyn Evans was born in 1958 in Llanelli, Wales and now lives and works in London.