Shape Chroma: Tension Fine Art London: Newton and Goethe famously disagreed on the genesis of colour. Most commentary assumes Goethe was wrong. But this is true only if you accept that colour can simply be described by physics and that psychological and conceptual components have no influence on the way that we see.

The highest goal a man can achieve is amazement – Johan Wolfgang von Goethe.

Goethe was a philosopher who understood the drift of thought in 19th century Europe. He was a romantic who’d grasped an important flaw in empiricism: the impossibility of objectivity. In the 19th century, the art historian Charles Blanc explored the laws of ‘simultaneous contrast’, drawing from the theories of Michel Eugène Chevreul and Eugène Delacroix, to suggest that optical mixing would produce more vibrant colour than the traditional process of mixing pigments. Science, psychology and, particularly, contemporary technology have moved on since then, but the fundamental dichotomy remains. How do we see and respond to shape and colour? As Jules Olitski wrote in Artforum in 1967, “the development of colour structure ultimately determines its expansion or compression – its outer edge. I think…of colour as being seen in and throughout, not solely on, the surface”. 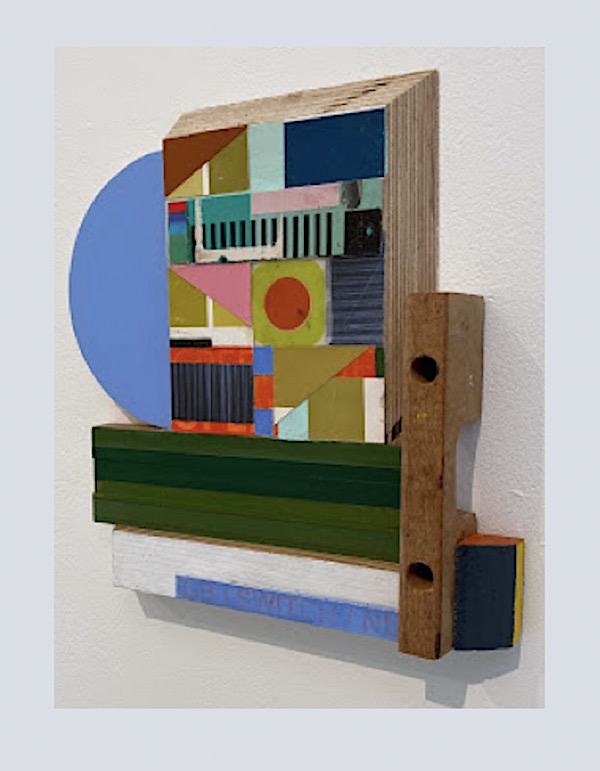 Shape Chroma is a ‘trialogue’ curated by the artist Caroline List between three painters: herself, Laurence Noga and Katrina Blannin, who bring these questions into the realm of contemporary aesthetics with different explorations into colour, shape and spatial illusion. No single issue has been more fundamental to modernist painting than the acknowledgement of flatness or two-dimensionality, but the power of the mark to suggest illusion and depth belongs not so much to painting as to the eye.

Exploring chromatic interactions, constructed and illusionistic space, each artist has created new painterly conversations in the light of Modernist abstraction and contemporary digital influences, highlighting the Goethe/Newton dichotomy between reason and the poetic.

Katrina Blannin’s meticulously layered geometric forms focus on complex systems of repetition and mathematics. Palindromic and isochromatic structures are used to produce paintings full of logical clarity that re-examine the history of colour theory and early Renaissance painting, which she explores within the context of 20th-century constructivism. Working with acrylic on a medium-textured linen, she generates fresh debates around the possibilities for the painted surface.

Nostalgia collides with a synthetic colour palette in the work of Laurence Noga, combining an industrial aesthetic with pure geometry. Layering collage, colour and mixed media, he plunders memorabilia from his father’s garage – tools, packets and washers – to evoke Proustian memories. An interest in the Bauhaus influences his choice of colour, setting up unpredictable surfaces and depths of field that draw the viewer into his discombobulating world.

Working on linen, board, paper and aluminium Caroline List creates luminous paintings full of sensuous hues that explore the spatial qualities of colour in relationship to form and ground, defined by their differing absorbances. Drawing on early 20th-century abstraction and virtual screen photography, her work implicitly refers to landscapes, organic shapes and atmospheric light. Using high key pigments and fluorescents full of transparency and opacity, her works, despite their sophisticated geometry, create links to the saturated colour fields of Rothko and the spiritual, otherworldly light of Caspar David Friedrich.

Colour is not ‘out there’ in the world – painted onto roses and snowdrops – but formed in our eye, mind and, even our hearts. Our perceptual apparatus creates colour filtered through our emotional state and cultural biases. An ambitious, visually intelligent show, Shape Chroma revisits art history to revivify what’s gone before in order to construct a new 21st-century grammar in which to re-examine these questions of colour theory and form. So whilst knowing physics is, undoubtedly, technically useful, it’s on the other side of perception that meaning and artistry reside, as is articulately illustrated by these three.

Tension Fine Art is a gallery dedicated to showcasing the work and raising the profiles of emerging and mid-career local, national and international artists. They show a mixture of contemporary & experimental art that questions what art is and what art could be.

Sue Hubbard is a freelance art critic, award-winning poet and novelist. A main feature writer for Artlyst, her latest novel, Rainsongs, is published by Duckworth and her fourth poetry collection, Swimming to Albania, is published this autumn by Salmon Press. www.suehubbard.com