The most macabre auction in the history of Hollywood is to take place on 17 November 2018. Julien’s Auctions, will celebrate the beauty and style of one of most promising actresses of the 1960s with PROPERTY FROM THE COLLECTION OF SHARON TATE, taking place in Los Angeles and online at juliensauctions.com. Sharon Tate, the pregnant wife of film director Roman Polanski was the highest profile murder victim in the Manson Family slayings in 1969.

Known as one of Hollywood’s most magnetic stars of the era, actress and model Sharon Tate’s life and style embodied the very essence of the decade now known as the swinging 60’s. Tate was amongst the celebrities that influenced the sights and sounds of that era’s culture, joining the likes of Jean Shrimpton and Twiggy.

Born in 1943 in Dallas, Texas as the daughter of a career military officer, Tate was destined for stardom, winning beauty contests before she was a year old which continued through her teens. After being noticed in the streets of Verona, Italy, she was cast in the epic film Barrabbas in 1961, as well as a Pat Boone television special. She was noticed by production staff in Italy for the filming of Hemingway’s Adventures of a Young Man (1962). Tate landed her first big acting role in 1963 as the bank secretary Janet Trego in the popular television series “The Beverly Hillbillies” (CBS 1963-1965). Tate was signed by Filmways and her first major starring role was in the 1966 occult classic Eye of the Devil. 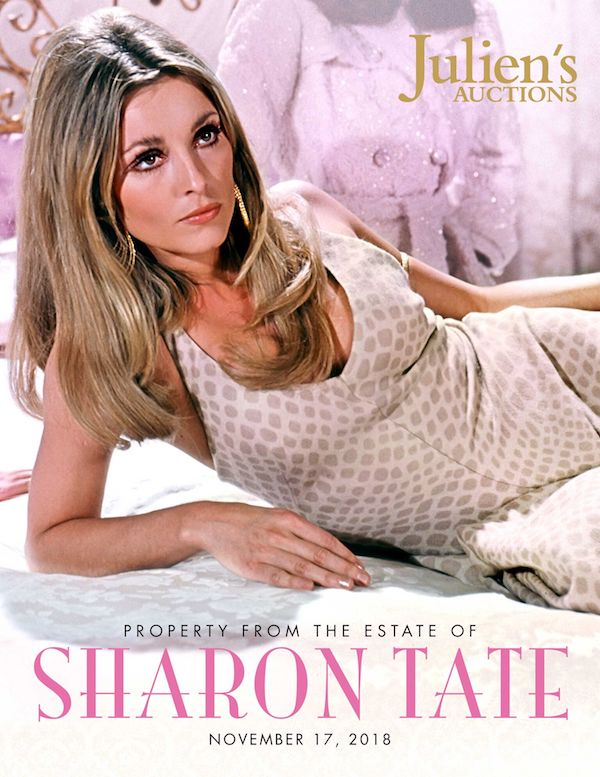 Tate was then cast in director Roman Polanski’s film The Fearless Vampire Killers (1967) where the two fell in love. They married in London in January 1968 in a wedding ceremony that included a star-studded after party at The Playboy Club with guests that included John and Juliet Mills, Joan Collins, Candice Bergen, Michael Caine, Terry Downes and more. Her other prominent roles included the comedy beach farce Don’t Make Waves (1967) and the spy spoof The Wrecking Crew (1968) with Dean Martin and Elke Sommer.

Her most famous role and acclaimed performance came as Jennifer North in the 1967 cult classic film Valley of the Dolls, which earned her a Golden Globe Award nomination for Best New Actress. Her final film role was in The 13 Chairs, also known as 12+1, which was released posthumously in 1969.

“Julien’s Auctions is proud to present this auction event that celebrates the beauty and grace of one of Hollywood’s brightest stars of the 1960s, Sharon Tate,” said Darren Julien, President/Chief Executive Officer of Julien’s Auctions. “We honour Sharon Tate’s life and loves in this personal collection that captures the style of a woman whose life was cut way too short and has long been overshadowed by an unspeakable tragedy.”