Unseen works by the artist Sir Sidney Nolan from his own private collection will go on public display for the first time in an exhibition at the Australian High Commission, London.

Unseen: works from the Sidney Nolan Trust Collection (21 April to 5 May) will feature 20 paintings that give a very personal view of Nolan and his techniques, approach and ideas. The exhibition will span Nolan’s entire career, featuring paintings created in 1938 alongside his last works, a series of four abstract spray-painted murals. Works relating to his most iconic series – including Ned Kelly, Gallipoli and Bracewell and Mrs Fraser – will form part of the exhibition. These paintings were never offered for sale or exhibition and remained in Nolan’s personal collection until his death in 1992.

It seems fitting that on what would have been Sidney’s 100th birthday we are able to share this very personal insight into his creative process – Anthony Plant, Director of the Sidney Nolan Trust

Anthony Plant, Director of the Sidney Nolan Trust and co-curator of the exhibition comments: ‘These paintings are Sidney’s very personal musings. They are almost whimsical, which is a word one doesn’t immediately associate with Sidney. They have never been shown together and most of them have never been on public display. It seems fitting that on what would have been Sidney’s 100th birthday we are able to share this very personal insight into his creative process and experimental approach to making art.’

Exhibition highlights include ‘Girl with a Spotted Dress’ (c1943), which is painted in a colour palate that is typical of Nolan’s Wimmera period but is a one-of-a-kind in terms of subject matter. ‘Head (Gallipoli)’ (1959) depicts the head of a soldier that differs from his other Gallipoli paintings in its composition and textural qualities. In ‘Convict’ (1959), Nolan tells the other side of the Mrs Fraser and Bracewell story with his portrayal of Bracewell, the convict, betrayed and hiding in the Australian bush. Also on show will be a painting of the Thames (1962); Nolan painted very few images of the UK and this work shows the view of the river from his London home.

Unseen is part of the Sidney Nolan Centenary, a UK-wide programme of exhibitions and events taking place throughout 2017 and organised by the Sidney Nolan Trust to celebrate the life and work of this major figure in 20th-century art. Born in Australia in 1917, Nolan moved to the UK in the early 1950s, where he remained until his death in 1992. 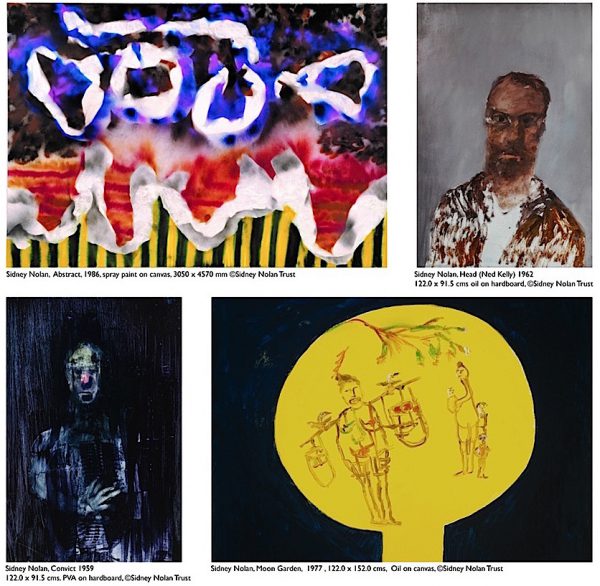 As part of the centenary programme and to also coincide with Nolan’s 100th birthday, the Royal Academy of Arts will run a day-long symposium on 22 April exploring key themes in contemporary art and culture drawing on aspects of Nolan’s artistic journey, work and life: international identity and the global artist referencing Nolan’s profile and influence across two continents; the artist as a polymath exploring Nolan’s breadth of practice; materiality and the artistic process highlighting Nolan’s wide range and use of materials as well as interdisciplinary approach. On 25 April Simon Mundy, poet, novelist, biographer and friend of Nolan will discuss Nolan’s life in ‘Still Radical’, a talk at London’s Highgate Cemetery, where Nolan is buried.

Other Sidney Nolan Centenary programme highlights include the first public opening of Nolan’s undisturbed studio at his home, The Rodd, in Herefordshire on 25 May and exhibitions at Ikon Gallery in June and the British Museum in November. Full details about the Sidney Nolan Centenary 2017 can be found at www.sidneynolantrust.org

Sidney Nolan was born in Melbourne, Australia on 22 April 1917. During his lifetime he became recognised as one of the foremost international modern artists.

In the 1940s, Sidney painted his now famous series inspired by the life of the outlaw Ned Kelly. At this time, he travelled extensively throughout Australia working incessantly and created a series of landscapes of the interior, drought paintings and others relating to the shipwrecked Mrs Fraser.

In 1951 he left Australia for London. He immediately travelled across Europe and in 1956 moved to Greece where he spent a year painting themes derived from Greek mythology. He also spent time at Studio 17 in Paris studying engraving and lithography with S. W. Hayter.

Nolan was awarded a Harkness Fellowship in 1958 to study in the United States. During the two years he spent there, he formed a close friendship with the American poet Robert Lowell and illustrated several books for him.

In England, Sidney was a regular visitor to the Aldeburgh Festival (then in its formative years) and developed a strong friendship with Benjamin Britten, exhibiting paintings inspired by Britten’s works in the festival exhibitions. In 1973, Faber Music Limited published a fine limited facsimile edition of the original score of Britten’s music for Berthold Brecht’s “Children’s Crusade” illustrated by Sidney Nolan. Sidney’s love of music and the opera led him to design sets and costumes for many productions, most notably for the Kenneth McMillan production of the Rite of Spring, first performed to acclaim at the Royal Opera House in 1962.

Sidney’s desire to see the world was insatiable and took him beyond Europe to Africa, China and Antarctica. He painted many series of works inspired by these continents and the people that lived there. However, his affection for Australia and sense of his Australian nationality was strong, and he continued to return there for a least a few months of every year.

Major retrospective exhibitions of his work were held in Sydney in 1967 and 2007, in Melbourne in 1987 and 1992, at the Whitechapel Art Gallery, London in 1957 and at the Royal Dublin Society in 1973. Important exhibitions of his early work were held at the ICA in London in 1962 and later in 1994 by the Metropolitan Museum of Art in New York. Sidney’s work is well represented worldwide and is in the collections of the National Gallery, Tate, MoMA, the Pittsburgh Museum of Art and the Irish Museum of Modern Art, among others.

When Sidney settled on the borders of Wales in the summer of 1983, he expressed the sense of belonging once again to a landscape of great magnitude quoting a line he had written in his youth: “All was static and monumental with the first of the dawn.”

At the age of 60 he felt compelled to devote himself to a review of his life, the music, opera and poetry that he loved and the characters he had met, and in his studio. In the great barns at The Rodd he worked on paintings of increasing size exploring these themes. For Sidney these paintings were a particularly important aspect of his life’s work.

Sidney Nolan founded the charity in his name at his home The Rodd, on the Welsh borders, in 1985. The ancient landscape reminded him of the timeless and monumental wild places that he had visited and painted throughout his career. Its ancient buildings afforded him the opportunity to realise his vision for a special place in a rural setting that would hold exhibitions of his work (and of other important artists) and that would host excellent music and opera. He was inspired in this by his friendship with Benjamin Britten and his contributions to the Aldeburgh Festival, and by the Bundanon Centre in New South Wales which was established by his great friend, Arthur Boyd. When Nolan died in 1992 the Trust was endowed with a legacy of his paintings, the property, the organic farm and the woodland of The Rodd.

Since Nolan’s death, the Trust has become a gathering place for artists, scholars and students who meet to exchange ideas and to develop their practice. Others, such as young people from the neighbouring West Midlands, come simply to experience and engage in the arts for the first time. All work with the enduring inspiration of Nolan’s artistic innovation and experimentation and the wonderful resources of the farm and the landscape.