Sotheby’s announced this week that a small, delicate Rembrandt self-portrait is to be auctioned on July 28th, here in London. The painting is unusually intimate, (about 17 x 22cm) and was painted in 1632 when the artist was 26 years old.

It took me a couple of days for this to sink in and I still have a strange sinking feeling. There seems something almost grotesque about it. As if Rembrandt himself is to be sold to the highest bidder.

George Gordon of Sotheby’s said in a statement: “In each self-portrait, he reveals as much of himself as he chooses to, but always in his unique fluency in the handling of paint. We know that this painting was created in a remarkably short period of time because he laid in the background first, but when he signed it upon completion, the background was still wet, so the signature is impressed into it by his brush.” 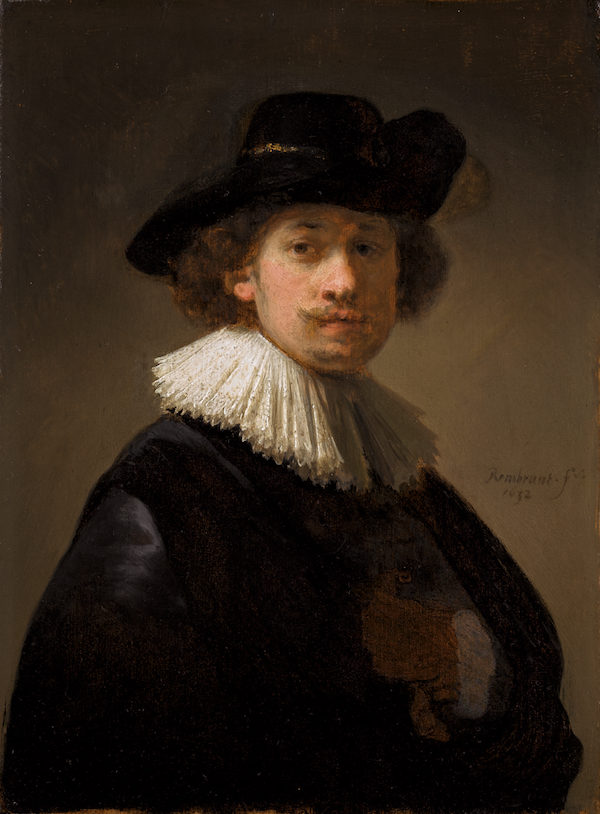 Conjecture has it that it may have been painted for his future wife Saskia, the great love of his life, and to impress her parents that he was a suitable match. Hence he is seen wearing the finery of a gentleman. It is on a wood panel and cut from the same tree as his Anatomy Lesson painting of the same year, which was his first major commission. This suggests to me that the painting should ideally reside in The Mauritshuis with its companion, The Anatomy Lesson, or indeed in a museum, preferably Dutch.

The seller is not identified, however, the painting’s provenance lists Noortman Master Paintings in Maastricht. They themselves are benefactors of The National Gallery, London, the Rijksmuseum, Amsterdam and the Mauritshuis in The Hague. All of which are custodians of many Rembrandts.

It seems extraordinary that a Rembrandt self-portrait is coming up for auction in the first place, and may never happen again… I would hate to think that it could end up in some bank vault never to be seen again, or a Saudi yacht as seems the case with the so-called Salvator Mundi by Da Vinci! Sotheby’s estimate for the Rembrandt is a very low 16 million! It was sold for £650 in 1970 when its attribution was in doubt.

It will be on view in London before the sale and apparently will test the waters of the art market as galleries and auction houses begin to reopen post-pandemic. Meanwhile, it is off to New York and Hong Kong ‘to woo potential buyers’ as the FT puts it… It’s disgraceful! When I mentioned this to my wife, her immediate response was ‘poor Rembrandt’! She is a nurse and has been surrounded by Coronavirus all these weeks. There is something particularly poignant about this situation and timing. Flying has been curtailed all these weeks and months. I can imagine Rembrandt, so innocent, with all his security guards being touted around the world. 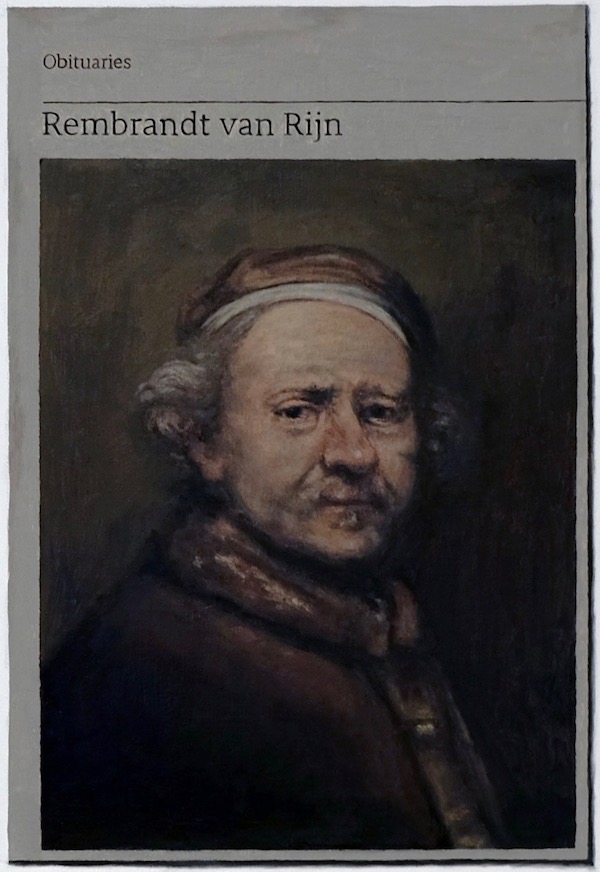 Right here and now, I would like to start a campaign to ‘Save Rembrandt’ for the nation, the Dutch nation that is, at least ideally. I will talk to all my contacts in the upper echelons of the art world and market, and I am talking to you now, through Paul Robinson and Artlyst. Perhaps the museums mentioned above could cooperate. Perhaps just one or two of our world’s billionaires could buy it and donate it for the sake of us all.

When I was asked in a recent interview to identify a particularly spiritual painting, it was Rembrandt that came to mind: his similarly tiny Flayed Ox from the Louvre and his self-portrait with two circles from Kenwood House, London. Rembrandt and his self-portraits represent something so deep and powerful in our human history and I feel we are standing at a global crossroads. It has been said that the role of the artist in society is to reflect or shed light and perspective, which he did in abundance.

My practice these days largely involves remaking other people’s self-portraits as obituaries. I am reflecting on the history of art and our common humanity. Within this context, I have already completed five Rembrandts, three on canvas (they reside in London, New York and Amsterdam, appropriately enough) and two more recently on paper whilst in lockdown. This in response to COVID related news stories. Maybe this little one will be the basis for a sixth… It is the exact same size as my smallest paintings.

Post Covid-19 people are talking of a new world or new normal. Is this small, unassuming Rembrandt to epitomise symbolically which way we will all swing, economically, ecologically, spiritually? Will we bring pieces of a 17th C tree back together again. Or is this little masterpiece to be locked away somewhere for some awful private investment. Surely something can be done!?