The acclaimed street artist Ben Eine has unveiled a huge 17,500 square meter mural. Depicting the word “CREATE” the artwork came to life on a truly unconventional canvas: a sparse, industrial ground space in East London spanning 17,500 square meters. The project was sponsored by Zippo makers of the iconic cigarette lighter.

A new video entitled An Unconventional Canvas reveals the enormous artwork and is available to view. The video captures Eine taking on his biggest, most unpredictable, the project to date and highlights the challenging path to create a large-scale painting on the ground. With the epic feat only entirely viewable from great heights, Eine secured satellite footage and used the power of drones to capture the creative journey. 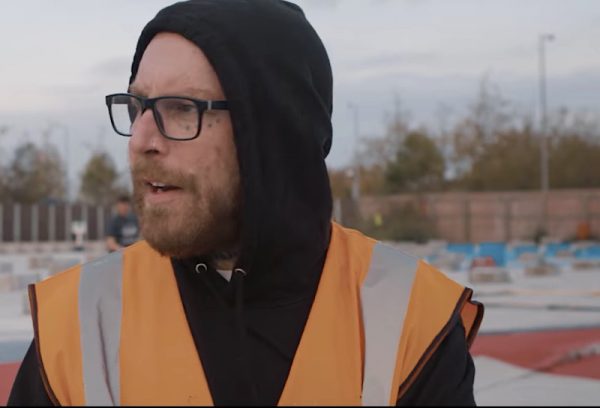 The huge artwork required 2,850 litres of recycled paint, a 200-litre bathtub for mixing, 18-inch wide rollers and a team of 30 supporting volunteers and six artists. Due to the sheer scale of the piece, Eine could only check the progress of the artwork with the use of drone footage.

Deputy Mayor for Culture and Creative Industries, Justine Simons, said: “Murals are a really important part of urban life, helping to showcase the character and spirit of an area. With a giant message to ‘create’, this artwork has captured the essence of East London – home-grown creative talent using an unconventional space to make something really ambitious.”

A master of messages, Eine is famous for the large, colourful letters and phrases he paints onto city streets across the globe. For this latest piece, he painted the word ‘CREATE’, a nod to self-expression.

Ben Eine commented: “I love to paint and beautify the most unexpected of places – I’ve painted everything from doorways to trains but have always wanted to do something huge and different. Painting on the ground was a cool challenge because you can’t just stand back and see what you’re doing. We used drones, string and all sorts to make sure it looked how I imagined, and check that it was spelt right! Seeing the final satellite footage was amazing, I got to create a unique stamp in my hometown – a pretty awesome achievement”.

Months in the making, and live for an indefinite time, the artwork serves as a stark reminder of the transient nature of street art.

Born in London, Ben Eine is one of the most successful street artists in the world and is regarded as a pioneer in the exploration of graffiti letterforms. Originally, a writer, Eine started his career over 25 years ago, leaving his first tag all over London before developing his distinct typographic style. Eine aimed to point out that street art is distinct from graffiti. He believed “street artists want to add something to the environment.
Read More About Street Art Here