A new display dedicated to women artists working in Britain over the past 60 years will open in April 2019. Around 60 works, by artists such as Mona Hatoum, Sarah Lucas and Bridget Riley, will be brought together for the first time. Sixty Years is a curated display from Tate’s collection as part of Tate’s ongoing commitment to increasing the representation of women across its galleries.

The exhibition celebrates diversity and embraces key movements and debates through women artists. The display will feature a vibrant selection of intergenerational artists working in painting, photography, sculpture, drawing and film, from Mary Martin to Anthea Hamilton, and include many recent acquisitions. 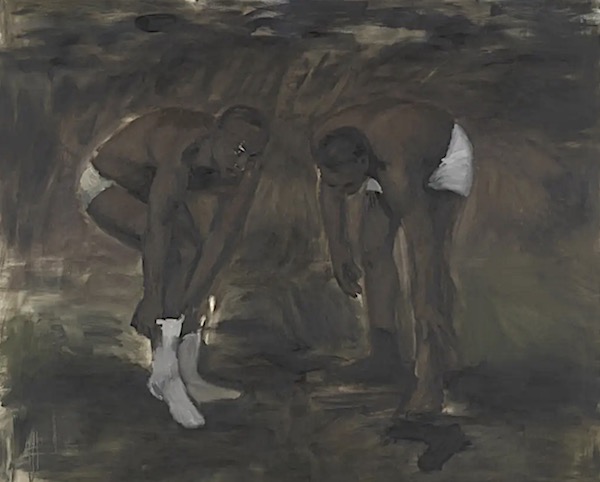 The Generosity by Lynette Yiadom-Boakye

Alex Farquharson, Director, Tate Britain said: ‘The recent histories of the Turner Prize, Tate’s exhibition programme and contemporary acquisitions reflect the critical role of women in the history of British art over the last 60 years. This presentation, Sixty Years, will offer a significant moment to recognise and celebrate a selection of Britain’s most important artists working from the 1960s to the present day.’

The announcement follows a year marking the centenary of the right to vote for women over the age of thirty in the UK. In 2018, Annie Swynnerton’s portrait of leading suffragist Dame Millicent Garrett Fawcett went on display at Tate Britain, and Tate Collective London in collaboration with the Mayor of London launched LDN WMN, a vast display of 20 public artworks across in the capital by emerging artists highlighting many women who have played a crucial role in London’s history.

Major highlights in the forthcoming display will include Gillian Wearing’s film Sacha and Mum 1996 and Susan Hiller’s multimedia installation Belshazzar’s Feast, the Writing on Your Wall 1983-84. Combining video, colour photography, drawing, sound and interior furnishing, Hiller’s large-scale work recalls the traditional hearth of a domestic living room centered around a television set and was the first video installation ever to be acquired by Tate in 1984.

Following the unveiling of Monster Chetwynd’s popular Tate Britain Winter Commission in November, the display will also include two new mixed media works by the artist: Crazy Bat Lady 2018 and Jesus and Barabbas (Odd Man Out 2011) 2018. Photographs, film and costumes based on Rose English’s large-scale performance work Quadrille 1975, 2013 will be brought together as a single installation for the first time, alongside Rita Donagh’s neon and argon tube sculpture affirm/deny 1972. Other artists will include Turner Prize winners Tomma Abts and Rachel Whiteread, as well as Sonia Boyce and Rose Wylie.

In 2019, a range of monographic exhibitions and displays across Tate’s sites will celebrate women artists. These include Natalia Goncharova, Dora Maar and Dorothea Tanning, at Tate Modern, Sol Calero at Tate Liverpool, Anna Boghiguian and Otobong Nkanga at Tate St Ives and Rose Finn-Kelcey and Joanna Piotrowska at Tate Britain.

Sixty Years is curated by Sofia Karamani, Assistant Curator of Contemporary British Art, Tate and will open on 22 April 2019. – Free