Every now and then even a hardened old lag in the art business – yes, folks, I mean me – gets a nice surprise. Last month an artist I’ve known for quite a long time -Terence Ffyffe, aka Terry Ffyffe – asked me to come and look at a new series of paintings. So I trailed out to a studio he uses in the far East End of London, expecting some pleasure, but nothing resembling a major jolt. Terry is of mature years, an immigrant from Oz, and till now he has been known chiefly for religious paintings, in a solid realist style. He has had quite a bit of exposure over the years and has had success in major competitions, notably the Discerning Eye.

I’d recently seen some small works of his that suggested that he was changing direction, transiting to something new. Then I got to his new workplace, and my reaction was ‘Wow!’

I’d recently seen some small works of his that suggested that he was changing direction, transiting to something new. Then I got to his new workplace, and my reaction was ‘Wow!’ He showed me a whole series of much larger paintings, from a series he calls Cosmic Art. These were whirling, dynamic abstract designs – a total break with anything major of his that I had encountered previously.

Big leaps in style are not unknown among major modern and contemporary artists, Picasso built his career on them. Just recently, however, the art being produced, both here and elsewhere, particularly in more traditional media, has seemed to be pretty stagnant. For example, all those self-portraits of the great Mr Baselitz, presented by grand commercial galleries such as White Cube and Gagosian. Major museums throughout the world now seem to be stuffed with them. But at least one thinks, each time one sees yet another one: “Yea, well after all – the guy can paint.”

Most of the action, however, now seems to be focused on technological innovation – things you can do on the computer, or only see in finished form on the computer. Those at least are indubitably new. 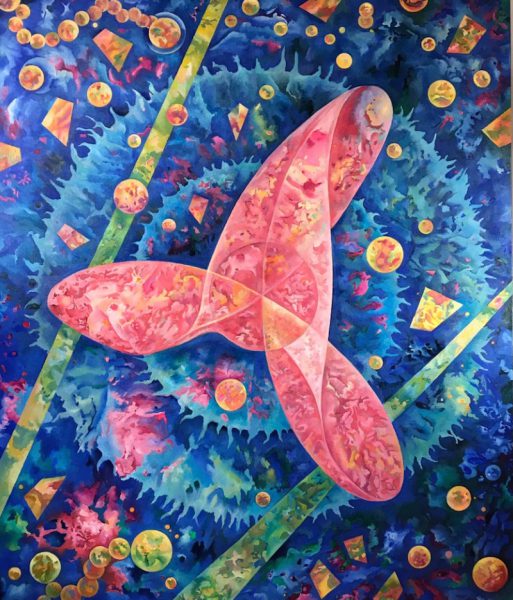 Meanwhile, Tate Modern, in its new wing – more restaurant spaces and meeting spaces than actual gallery space, but who’s complaining? – seems determined to promote new forms as opposed to what it thinks of as old forms: performance, installations, video. Though the paradox here is that at least some of these supposedly new forms have a very long history behind them. Where performance is concerned, for example, I’m pretty sure the men and women of the Stone Age did performances, as well as making those old-fashioned fancy pictures on the walls of their caves. Maybe even a bit of public human sacrifice, like ISIS in the Middle East today. Mother Tate wasn’t there to tell them which form of activity pointed more directly to the future, so they were happy to do both.

Terrence Ffyffe was born in Melbourne, Australia. He studied at Swinburne University under Jeffrey Makin and Roger Kemp. After living the bohemian life of a painter in Carlton, extensive travels in the Australian Outback and several solo shows he came to England to study the “Old Masters” of European Painting at first hand. Unknown in the UK he painted portraits to support himself while he developed a uniquely expressive style. He eventually came to the attention of the art critics Edward Lucie-Smith and the late Daniel Farson, who introduced him to the “London School” and the world of Francis Bacon. He has won a number of National Competitions including the Discerning Eye. Terrence has invented a new style of Painting which he calls ‘Cosmic’Art. Comparable to the Old Masters in terms of technique but with a new vision. David Lee, the fierce art critic and editor of the Jackdaw has said “Terrence Ffyffe will in time prove to be a Great Painter”