The show represents almost 30 years of the couples creative and personal partnership. Featuring archival pieces from their fashion and film costume work. The event will also premiere new body based art works by Whitaker Malem- fusing together the worlds of fashion, art & film- their new work is a deeper exploration of sexuality and gender. Pop Artisans is presented in conjunction with Duovision, Homotopia & Arts Council England. The work in the exhibition explores the relationship between fashion design, film costume and pop art & culture, centring on body culture and eroticism

New work Transmorphic Superpeople is an optimistic exploration of the multiple possibilities of fluid sexual identities. Drawing on Whitaker Malem’s extensive experience as artists and makers, it represents the start of an exploration of this theme, playfully exploring the limits of sex and gender by engaging with the visual language of masculine and feminine archetypes. Fitting together along their identical seams, these figures can swap bodies and morph into new composites, provoking thought about the difference between the sexed body and the masked performance of gender identity.
The presentation of these figures partly subverts preconceptions by emphasising their sameness as well as their difference: on the level of gender presentation, these bodies are deliberately rendered equal. ‘Dressed’ in the same colours, they are differentiated by their genitalia but little else (the lenticular piece especially emphasises this) – they are deliberately imagined on the same scale. Presented as anonymous archetypes, what we see are two ultra-sexy bodies in peak physical condition, one-sexed female and the other sexed male, but rendered equal regarding physical potency and desirability. 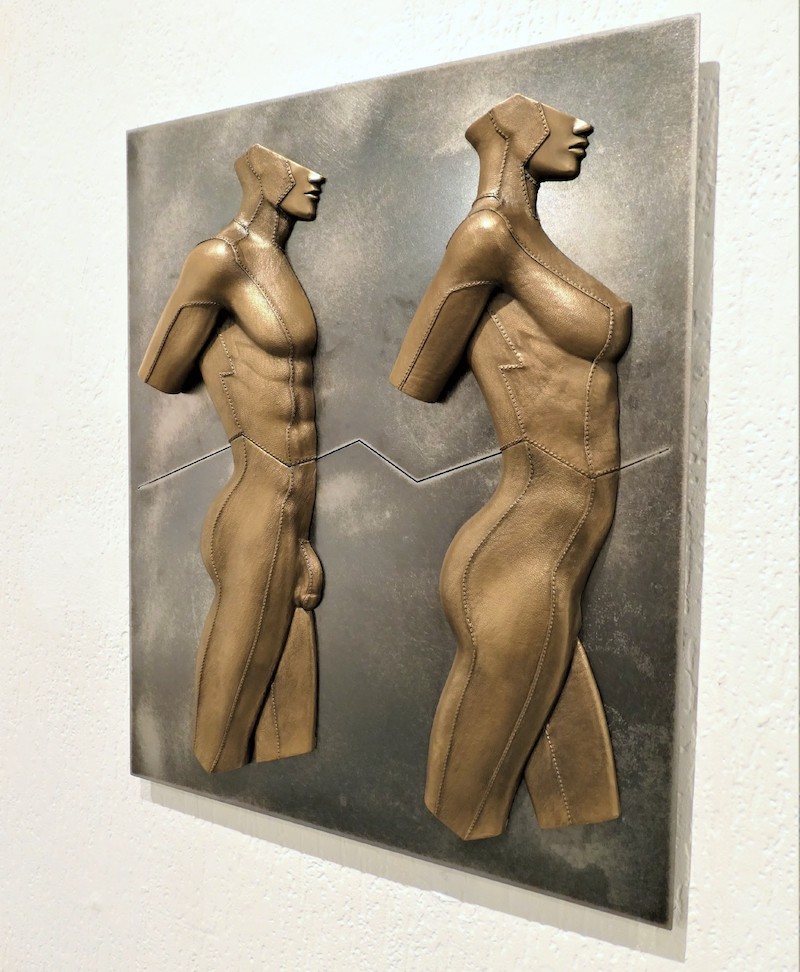 With these pieces, we are playing with the limits of physical objectification. Interestingly, at this level of aestheticism, the body, in fact, becomes almost androgynous. This work is not designed to promote body elitism but rather to explore how, regardless of its sex; a highly developed muscular body follows a particular form. The resulting sense of equality is important to these figures that might be called Transmorphic Superpeople – representations of the human form liberated from the complexities of individual identity via their playful and knowing emphasis on surface and uniform perfection.

Informed by Whitaker Malem’s work on superhero movies dealing with deity-like archetypes, with their layered leather surfaces, these figures contain echoes of the secret identities that lurk beneath the classic superhero bodysuit. Engaging with the vernacular of Greco-Roman relief sculpture, with its focus on gods, goddesses, and mixed creatures such as centaurs, they present a futuristic prototype of a new kind of contemporary deity. Deliberately anonymous, they fully subjugate the notion of selfhood to their surface in a way that mirrors the process of their creation, wherein we have to give ourselves over to the pursuit of formal perfection above all else, in an almost masochistic process of submission to the concept.

Patrick and Keir say of this work: “to reflect our artisanal practice, which is grounded in attention to surface and tactility, it felt important for the pieces to have an interactive element. The work is a participatory experience that encourages active engagement, inviting play and celebrating the potential liberation of moving seamlessly between the two sexes – an equality of experience where all bodies can be all bodies.”
There will be the opportunity to see selected pieces and process material from movies such as Captain America: First Avenger, Batman: The Dark Knight Trilogy, 007: Die another Day. Their other film credits include Eragon, Harry Potter, Speed Racer and Eva Green’s armour for 300: Rising of an Empire.

Demi cult figures and self-styled designer artisans Whitaker Malem have quietly influenced the worlds of fashion and pop culture for over 30 years; they began life as a fashion house in 1988, focusing on leather. The pair met by chance at a London gay pride house party in London in 1986; Patrick Whitaker was studying fashion design at Saint Martin’s School of Art, and Keir Malem was working at the Tricycle Theatre in Kilburn, London. The partners first worked together when Keir helped Patrick with his degree show collection in 1987- which featured a formed leather bustier. Emerging into the late 80’s fashion scene dominated by streetwear and the dawning of deconstruction, they can now be viewed as the UK’s visionary pioneers of avant-garde body based sculpture – drawing on the influences of Fetish S&M, Science Fiction allied with craftsmanship. Their work early work presages designers such as McQueen, Chalayan and Gareth Pugh.

After 10 years as an independent fashion label they moved into collaborations with other fashion designers, Including – creating a gold leather armour dress for Alexander McQueen’s Spring/Summer 1997 debut Givenchy haute couture collection, a leather eagle bustier for Tommy Hilfiger’s Spring/Summer 2000 Red Label show worn by Naomi Campbell (both these collaborations foretelling their work on Wonder Woman). They have also worked on collections with British designers Giles Deacon and Hussein Chalayan.

Since 1991 the couple has collaborated with Fashion designer Zandra Rhodes and created the male half of the ‘host/hostess’ costumes for artist Andrew Logan’s Alternative Miss World.

HOMOTOPIA is an arts and social justice organisation that draws on the LGBT experience to unite and regenerate communities through the production, promotion and commissioning of great art, heritage and culture for everyone. HOMOTOPIA is funded by Arts Council England as a National Portfolio Organisation and Liverpool City Council.

The exhibition runs until December 10th open daily with free admission to the public.