Fortnum & Mason will be continuing their annual artistic collaboration Fortnum’s X Frank 2018 (FXF18), 10th September – 20th October, with the prolific art collector, Frank Cohen, presenting a rich body of work by British landscape artist, John Virtue. Virtue was awarded the post of Associate Artist at the National Gallery and this will be the first time since his 2005 National Gallery show where he exhibited an extensive oeuvre of works his works in London.

Fortnum’s X Frank 2018 (FXF18) will see 70 large-scale monochromatic works by Virtue placed across the floors of the luxury London store, in the heart of Piccadilly. Having trained at the Slade School of Fine Art and now residing in North Norfolk, Virtue’s practice is continually informed by natural environments and his geographical moving from Lancashire to Devon, to London, and now to Norfolk. The artist’s idiosyncratic black and white canvases, created using a mix of white acrylic paint, black ink and shellac, will provide a provocative juxtaposition among the iconic Fortnum’s colours and gilt. The works chosen include abstract landscapes that challenge the viewer to see beyond the paint to make out landmark sites, such as London’s St Paul’s Cathedral, London Eye and The Gherkin. Fortnum’s X Frank 2018 (FXF18) is curated by Robert Upstone, former Director at the Fine Art Society, which he joined in 2010 from Tate Britain where he was Head of Modern British Art.

This month-long collaboration takes place as the global art world descends on London for the prestigious Frieze Art Fair. Fortnum’s has a long-standing commitment to the arts, supporting generations of artists
and designers through its connections with the Royal Academy, the Royal College of Art, the Slade School of Fine Art and the Bloomsbury Group, alongside Fortnum’s own distinguished collection.  Fortnum’s X Frank 2018 (FXF18) will coincide with London Design Festival, culminating in a diverse programme of cultural celebrations and content moments in-store throughout September. 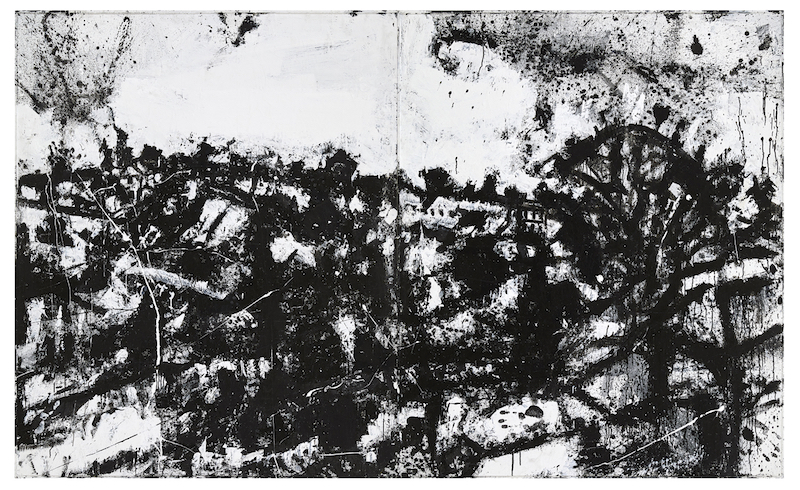 “Fortnum & Mason is about creating a sense of pleasure, and while we focus on things that taste amazing, art enhances the sensory pleasure of the store and creates an intellectual pleasure for those that enjoy it. With Frank’s astute collectors eye and Robert’s impeccable curation, we are able to challenge and inspire our customers as they move throughout the store. As a British, family business, it seems a perfect fit to have John Virtue’s incredible landscapes and seascapes exhibited in our home throughout one of the busiest months in London’s art calendar.”

Ewan Venters, CEO Fortnum & Mason – “Virtue was taught by Frank Auerbach in the late 1960’s before leaving painting entirely for many years. It was only in his early thirties that he returned to drawing and painting, producing masterpieces over the past four decades that have continually been underappreciated. I am a collector of his work and always admired the energy and power of his expansive landscapes and surging seascapes. In a time when the whole world has gone Contemporary mad, I was keen to steady the boat and bring these works to the foreground.”

A fixture in Piccadilly since 1707, Fortnum & Mason remains an essential London destination for anyone in search of extraordinary food, glorious gifts and unforgettable experiences. From the food halls and confectionery counters at street level, to the beautiful fragrance, beauty and fashion floor, expertly- curated gentlemen’s department, and refined Diamond Jubilee Tea Salon above, Fortnum’s is committed to making the everyday special for each customer, whether they’re shopping in-store or from around the world at the award-winning fortnumandmason.com.
Fortnum & Mason has had a long history of art and design, spanning furniture design, ceramics, craft and fine art. The Fortnum & Mason art collection started very organically in the 1950s, with then-owner and Chairman, Garfield Weston procuring pieces he liked and putting it on the walls. At the heart of Fortnum & Mason is the idea of creating and selling pleasurable things – either to taste, see or experience. Displaying beautiful and intelligent objects and celebrating the makers and craftsmanship behind those objects has been at the heart of Fortnum’s for centuries. This is fundamental to the company ethos and so the store is constantly identifying, nurturing and supporting makers and artists in London and beyond.

Frank Cohen is one of the world’s most influential and prolific collectors of British and international contemporary art. He began collecting Modern British art in the 1970s and in the early 1990s became a patron and supporter of the Young British Artists (YBAs). He also collected American and German art of the 1980s and 1990s, contemporary Japanese art (especially the Superflat movement) and more recently has added contemporary Chinese and Indian art to his interests. Every year he is listed in ARTnews magazine’s list of ‘The World’s Top 200 Collectors’ and is often referred to as the Medici of the North. Frank has been a judge on a number of prestigious Award panels including: the Jerwood Painting Prize in 2002; the Turner Prize in 2003 (won by Grayson Perry); and BBC2’s School of Saatchi – a TV programme award aimed at promoting and discovering young artists. Frank Cohen was most recently featured in Sky Arts’ ‘National Treasures: The Art of Collecting’ in 2018. Previous notable exhibitions have included: a significant collection of Modern British masterpieces from the Frank Cohen Collection that went on display at Chatsworth House’s New Gallery in Spring 2012; a

John Virtue, born 1947, originally from Accrington, Lancashire, studied at the Slade School of Fine Art (1965 – 1969) by Frank Auerbach, with whom he maintains close friendship to this day. Virtue specialises in monochrome landscapes, initially painting before moving to pen and ink. From 2003 – 2005, he was the sixth associate artist at London’s National Gallery, a scheme that engages contemporary artists to produce work that connects to the gallery’s collection, demonstrating the continuation of old master traditions.

An Honorary Professor at the University of Plymouth and internationally exhibitor including the Serpentine Gallery, Whitechapel London, Tate St Ives and his work hangs in the public and private collections of Tate Britain, the British Museum, V&A, Walker Art Centre, the Yale Centre for British Art and many more. John Virtue has worked with a number of distinguished international galleries, including Lisson Gallery, Bernard Jacobson, Marlborough Gallery and LA Louver Gallery in Los Angeles but is now solely represented by Michael Hue-Williams / Albion Barn, with whom he has made four solo exhibitions.
A major monograph is being prepared to be published by Albion Barn Publishing and Ridinghouse Editions, being written by the former senior curator of TATE and National Portrait Gallery, Paul Moorhouse.