A new exhibition at Pallant House Gallery is presenting a major study of the work of the British artist Victor Pasmore (1908 – 1998). It focuses on the radical change of direction in the artist’s career between 1930 – 1969, 50 key paintings and sculptural reliefs show how Pasmore reinvented himself as one of Britain’s foremost exponents of British abstract art, having previously been known as one of its leading figurative artists. Later described by art historian Herbert Read as ‘the most revolutionary event in post-war British art’, this experimental period saw Pasmore’s work progress towards a new pictorial language and representation of reality. The exhibition is joined by a display of British Constructivism, a selection of sculptures, reliefs and paintings by artists working in this area.

By the beginning of his professional artistic life in the late 1930s, Pasmore had quickly established himself as an assured painter of lyrical landscapes, figures and still-life studies in a style that drew upon his familiarity with the work and writings of a number of post-impressionist masters such as Pierre Bonnard. His work received official sanction in the form of private patronage from Kenneth Clark, Director of the National Gallery, and it was Clark’s financial support that enabled him to devote himself entirely to his art and teaching at the newly founded Euston Road School with William Coldstream and Claude Rogers. Typical of the objective approach of the Euston Road period is a group of tender portraits and nude studies of his wife Wendy from the early ’40s.

Nothing seemed to suggest the major change in direction Pasmore’s work was to take two years after the end of the Second World War. Only in retrospect is it possible to glimpse the first tentative explorations towards more formal concerns of composition that were to lead to his total renunciation of representational art. From Pasmore’s works and writings, a fascinating picture emerges of the years from the late 1940s to the early 1950s when landscapes of Hammersmith incorporating increasingly suggestive formal structures led to his first fully abstract paintings and a series of authoritative collages. These were quickly followed by a number of paintings featuring spiral patterns, the most notable of which in the exhibition is The Snowstorm commissioned by the Arts Council for the Festival of Britain in 1951. Around 1955 the artist’s search for an objective abstract language led to his constructed reliefs made from pre-formed industrial materials.

Pasmore’s conversion to abstract art was made in the face of considerable critical hostility. His experiments in sculptural form and spatial relationships led to a number of architectural commissions culminating in his work for a housing estate at Peterlee, County Durham. One of the latest works in the exhibition is Pasmore’s maquette for the Apollo Pavilion at Peterlee.

British Constructivism is also explored in a new display at Pallant House Gallery. A selection of sculptures, reliefs and paintings by artists working in the area will be exhibited to complement the Gallery’s major spring exhibition, Victor Pasmore: Towards a New Reality, which illustrates Pasmore’s controversial move from figurative to abstract art. Pasmore was a leading figure among the British Constructivists; his work is included in this exhibition alongside works by artists such as Kenneth Martin, Mary Martin, Anthony Hill and Norman Dilworth, all drawn from the Catherine Petitgas Collection.

The British Constructivists were an unofficial group of abstract artists with shared interests who were inspired in part by the ideals of Russian Constructivism. In 1951 British artist Kenneth Martin published an article entitled ‘Abstract Art’ in the publication Broadsheet No. 1: Devoted to Abstract Art in which he described the work of this emerging circle of abstract artists. He characterised the new constructed work as an ‘object which is real and not illusional in that it sets out to represent no object outside [itself], but to contain within itself the force of its own nature.’

During the 1950s, the British Constructivists organised a series of exhibitions. These included Abstract Paintings, Sculptures, Mobiles, at the A.I.A Gallery, London in 1951 and during the following year three weekend exhibitions held at 22 Fitzroy Street; the London studio of artist Adrian Heath. Unframed paintings, reliefs, collages, sculptures and mobiles were placed at different heights so that the space of the whole studio was animated. This environmental approach to the installation and their shared belief that their art was closely allied to the forms and materials of modern architecture was central to their contribution to the seminal exhibition This is Tomorrow held at the Whitechapel Art Gallery, London in 1956.

In the late 1950s and 1960s, they continued to exhibit their work and established the group’s central position within the development of the British avant-garde. By 1960, a new generation of artists including Peter Lowe, Gillian Ware, Norman Dilworth and Jeffrey Steele joined and became closely associated with the group’s ideas.

Victor Pasmore (1908-98) was a leading figurehead among the emerging constructed abstract artists in post-war Britain. He was however less theoretically radical than the others, and was the only one without a strong preoccupation with mathematics.

Kenneth Martin (1905 – 1984) and his wife Mary Martin (1907 – 1969) are the best-known of the core constructivists. Their teaching methods had a long-lasting impact and a unifying influence on the development of the other artists in the group. Although always working closely and often exhibiting together, they developed two very distinct bodies of work. Kenneth Martin was primarily concerned with the laws of chance or order, while Mary Martin focused on the working of permutations, structures, rotations and the golden ratio. Constructions were central to Mary’s work, while Kenneth explored mobiles and paintings, although both realised large sculptures and murals. 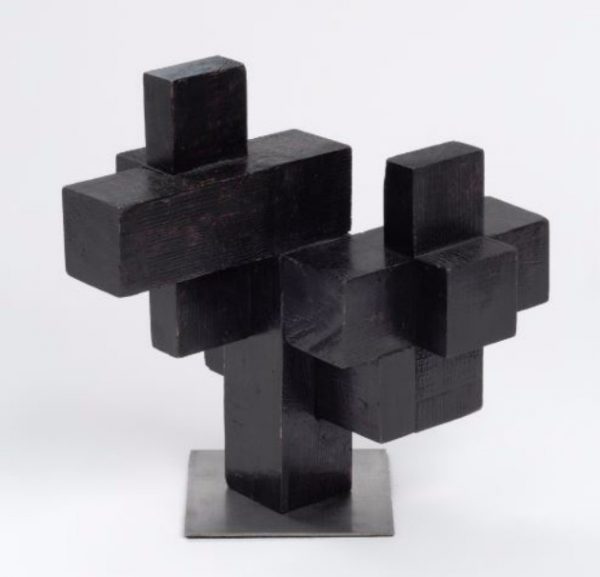 Norman Dilworth (b. 1931) explores the many possibilities of forms that are at once organic and mathematical, with a degree of freedom that again demonstrates the connection between structures and plasticity. His sculptures are concerned with modular patterns and the way these organise a coherent whole.

John Ernest (1922 – 1994) was a gifted mathematician and craftsman of enormous skill, creating work by hand with apparent laser precision. He was a US-born artist who joined the group early and was to be central to the development of the constructivists. He also wrote on constructivism and collaborated closely with scientists – including Nobel Prize winning chemist, John Kendrew – to help them create visual representations of their discoveries. His most famous work, Tower (Vertical Construction) (1955), now in the Catherine Petitgas collection, has only been exhibited in public twice before.

In the late 1950s Jeffrey Steele (b. 1931) moved from figurative painting to creating monochrome abstract works. The visual effects of these paintings were determined by Steele’s research, which used the objective arbitrary values of equations as starting and finishing points. The result is an oeuvre of immense interest.

Peter Lowe (b.1938) was a student of Kenneth and Mary Martin. His work embraces systematic rigour, having reduced patterns to a strict minimum in order to reveal their infinite variability. Simple, yet also complex and unique, his work attains a conceptual sense of space and volume.

Anthony Hill (b. 1930) was a keen mathematician and is different from many of his peers in that he never produced a single figurative work in his early years. His constructions are made from a combination of materials such as plastic, brass, copper and aluminium and each element is used directly from the manufacturers. The result is not about the demonstration of a mathematical equation but rather the harmonious relationship of the whole.

Catherine Petitgas is an art historian and patron as well as a leading collector of South American art. Since 2012, Petitgas has expanded her collection to include the work of significant British artists. The present exhibition from the collection is an opportunity to reflect on notions of the avant-garde in Britain and offers a valuable contribution to our understanding of what makes art new, and why it matters.

British Constructivism: The Catherine Petitgas Collection opens on 11 March 2017 and runs until 11 June 2017. It has been curated in parallel with Pallant House Gallery’s major spring 2017 exhibition