The last time we saw Wallace Chan’s work was in the Docklands in London when he showed ten of his large-scale titanium and iron sculptures in an exhibition titled “A Dialogue Between Materials and Time, Titans XIV”.

Chan’s work is very much about space and materials

Chan’s work is very much about space and materials, and here in Venice, with his show “TOTEM”, he has taken a 10-metre titanium sculpture (once seen in London) apart and deconstructed it to create an installation work composed of multiple unassembled parts scattered across the floorspace of Fondaco Marcello during the Venice Biennale. Sculptures once seen as huge immovable objects are given a new fragility and uncertainty by Chan.

We are invited to approach the sections of the sculpture up close and from differing viewpoints giving us new perspectives. Reflective steel adds even more new perspectives, and the experience of walking amongst the deconstructed sculpture heightens awareness of the work’s relationship to the space around it. Chan has unbelievably managed to invest titanium, a material mainly used in the aerospace industry thanks to its strength, with poignancy.

Why titanium? It’s a material that has been overlooked by artists due to its cost and complex production process. Well, Chan has been working with titanium for a long time, but on a much smaller scale – he is a world-famous jeweller whose works are in the permanent collections of the British Museum, the Beijing Capital Museum, and the Ningbo Museum. 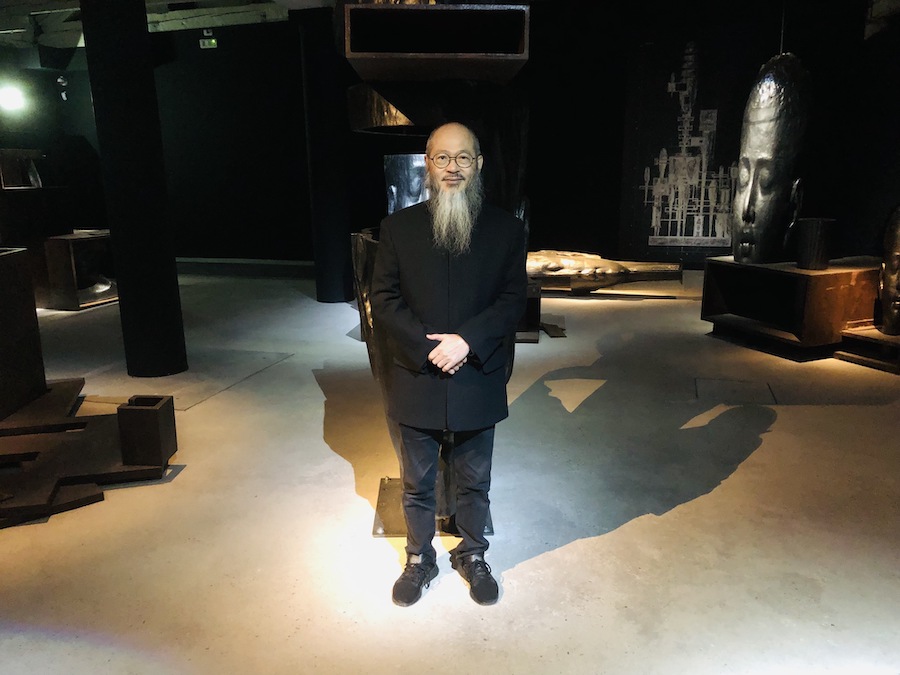 A real innovator: He developed a porcelain five times stronger than steel and then spent eight years researching titanium, which has never been seen on this scale before due to its complexity as a material. The only way he could work with titanium was to invent new tools, as existing ones constantly broke!

Interestingly, his pioneering work in jewellery has a parallel with the show in Venice. He invented the famous “Wallace Cut” in 1987, a three-dimensional engraving technique that gives the illusion of five faces appearing in the gemstone when only one central face is carved using reflections and tricks of light. And in ‘Totem’, the installation uses light and reflective stainless steel to create its own illusion of multiple reflected faces that appear and disappear as you wander around the work. Our minds naturally assemble and disassemble the works in a constant play of dimensionality, space and human interaction.

Up close (which the Venice show allows us to do), these giant and solid body parts strewn around the palazzo are strangely calm and contemplative. Meeting the artist Chan is the same experience, a man who exudes calm. In a city saturated with art and noise, this exhibition encourages you to find quiet amongst the chaos.

As we move around the works, placed seemingly haphazardly, they start to connect and re-assemble and play off each other. Faces hidden appear out of nowhere. We notice how one angle hides another element. A gap in one of the heads contains a view of another; surfaces shimmer and change as we negotiate the space. The spectacle of Chan’s installation is not reliant on a singular, enigmatic form but is created by the relationship between those multiple parts. It is created by the viewer.

Wallace Chan has a real love and respect for the materials he uses, and it shows. There is a philosophical side to the work, a universality we can all relate to. Scale in art is a topic that interests me greatly. How we relate to work that subverts scale like Chan’s does. How we physically relate to enormous sculptures like this, compared to the passive experience of viewing a tiny picture on a wall. It makes us consider our own scale in the world.

Chan sums it up perfectly when he says he is “interested in exploring the mystery of matter and form and understanding the distinctions between the imagined illusory space and real physical matter.”

To use a buzzword, it IS an immersive experience, but without all the flashy lights and slide shows. It is a chance for us to physically interact with monumental art whilst also experiencing a contemplative calmness within the storm that is the Venice Biennale.