The American artist Wayne Thiebaud has always had the capacity to create serial images that make us think of the likeness between art and life. It renders him philosophical, thought-provoking and inquisitive. Rather than a de facto “realist”, we might better conceive him as an artist who interrogates reality refracted through a deeply knowing lens. The amazing thing is that this man is still alive and working!

Now White Cube Mason’s Yard presents an exhibition of Wayne Thiebaud work covering a period of over 50 years. One of America’s foremost painters, Thiebaud’s career spans seventy years. This comprehensive presentation includes a selection of paintings and works on paper that date from 1962 to 2017.

Thiebaud deals with a uniquely American vernacular in his paintings of everyday food, urban and rural landscapes and people. Often modest in scale, his subject matter is isolated and reduced, becoming the focus for painterly exercises in colour, volume and style. In the artist’s most well-known images of cakes, pastries and pies, begun around 1953, a heightened tactility and viscosity of paint is analogous to the actual objects depicted, a technique he has called ‘object transference’. In these paintings, icing swirls are recreated on the surface of the canvas through thick impasto or, in the painting Bakery Case (1996), paint is thickly applied to literally suggest icing swirls. As John Yau has written: ‘Thiebaud conflated the forms and colours of the observable world with those of an imagined one so that they were virtually indistinguishable from each other.’ (Thiebaud, Rizzoli, 2015) 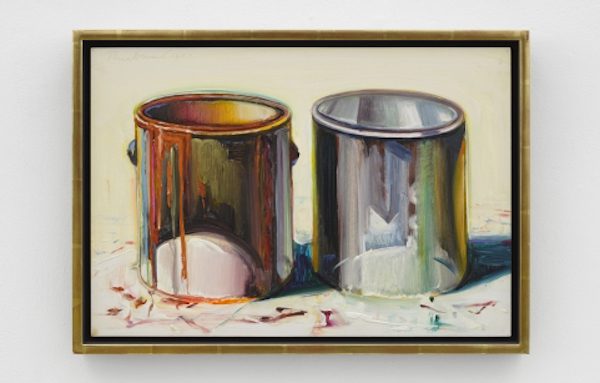 Although emerging concurrently with Abstract Expressionism and then Pop Art, Thiebaud’s work stands apart, closer in approach to Edward Hopper’s paintings of urban life or the focused still lifes of Cézanne or Morandi. Thiebaud creates a tension between surface and depth, using a colour palette that ranges from pastel hues to bright, bold tones. In works such as Cherry Topped Desserts (1986) or Cheese Deli (2016−17), bold colour recalls a Fauvist approach, freed from direct descriptive purpose. Ample, blank space is allowed within the compositions and dark shadows around forms are emphasised, a technique used in commercial illustration, which Thiebaud also studied. This creates a sense of grounding and stability within the image but also suggests the disconnection and isolation of modern life. In his portraits, Thiebaud employs a similar approach, placing his sitters against an expanse of blank, white space, with minimal props and pared-down settings, as in the two paintings Sterling Holloway (1965) and Green Dress (1966/2017).

Thiebaud’s landscapes employ dramatic compositions, often aerial views of cliffs or fields with rivers or lakes bisecting the image. Farmed fields are depicted as patterned rectangles, slices or squares set against each other in vivid colours such as in the recent painting Fall Fields (2017). In the painting Y River (1998), the composition is bifurcated by a luminous waterway, snaking vertically upwards, tipping the perspective of the picture plane. Thiebaud relates these images to the experience of driving in America: ‘It came about by driving across the country and actually going through those canyons. Those imposing structures seem to just fall in on you and make such a nice visual shape that I can’t resist doing them.’ Likewise, in the work, Lake Edge (1997), the dramatic, snaking edge of land meeting water is the focal point of the image. To its left is a blank expanse of still water and to its right, a series of closely packed agricultural fields represented through various delicate patterns. By contrast, in the painting, Sandy Cliff (2013), washed-out purples, whites and skin tones depict the edge of a cliff, so abstracted and simplified its forms and undulations take on anthropomorphic qualities.