William Turnbull (1922-2012) was one of Britain’s most important post-war Modernists. He was described by Nicholas Serota when Director of the Tate as ‘an exceptional artist, unusually gifted both as a painter and a sculptor, he explored the changing contemporary world and its ancient past, actively engaging with the shifting concerns of British, European and American artists.

Offer Waterman has exclusively represented the artist’s Estate since 2015 and this is the most comprehensive exhibition of Turnbull’s work since a major retrospective at the Tate Gallery in 1973. Staged across six rooms and two floors of the Frieze space at No.9 Cork Street, the exhibition brings together more than 60 paintings and sculptures from every period of the artist’s career as well as a small number of works on paper from the late 1940s. Most of the works come directly from the Estate, complemented by significant loans from private collections to ensure a comprehensive presentation of the artist’s inventive brilliance and mastery of different mediums. 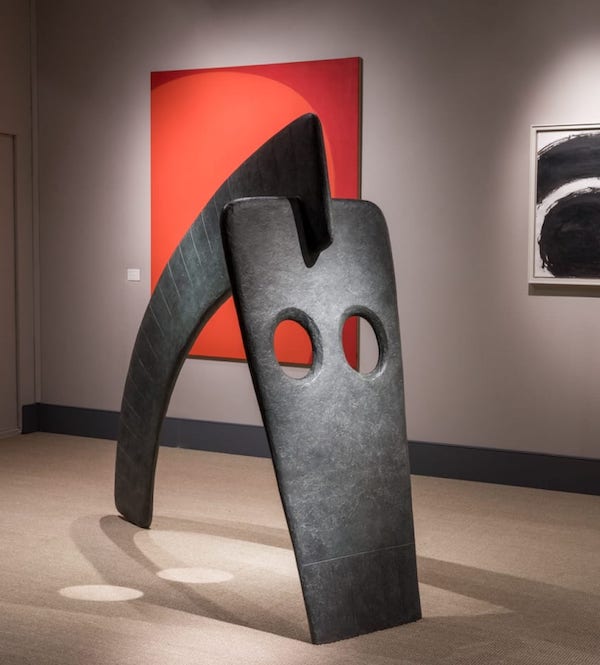 This retrospective begins in 1949, a year after Turnbull left London and the Slade to relocate to Paris’s more artistically experimental and exciting environment, where he made contact with some of the giants of modernism, including Brancusi and Giacometti. Turnbull was ‘fascinated with things moving and touching and perceptually convinced of energy as creation’. Initially, he created kinetic sculptures before producing static works that suggested the potential for movement, with the assertion that ‘ultimate movement is ultimate rest’. Three sculptures, Forms on a Base, Maquette for Large Sculpture and Torque Upwards, all dating from 1949, epitomise this notion, their spindly forms rising in different directions from rectangular bases. The plaster versions of these bronzes were exhibited at the Hanover Gallery, London, in 1960. The original presentation of the plasters, on stands from the artist’s studio, has been recreated at No.9 Cork Street.

Stones, the stacked sculptures exhibit excellent contrasting colours and surface textures. Some of these works, such as Agamemnon, 1962, Oedipus 3, 1962 and Janus 1, 1959, bear mythological titles that imbue them with ancient associations.

A group of Turnbull’s monumental, vibrant colour-field paintings will be showcased alongside a number of his large, raw and sprayed colour steel sculptures. These potent and experimental works, a marked departure for the artist, were in part informed by a trip to New York in 1957 during which Turnbull met Barnett Newman and Mark Rothko.

The exhibition introduces some of the most important themes of Turnbull’s career: the horse, the female figure and the human head. Five of the artist’s radically different approaches to the horse as subject are presented together, dating from 1946 to 2000 and ranging from the textured, angular planes of Turnbull’s upright, monolithic Pegasus, 1954, to the pared-back linear form of Horse 3, 2000.

Another room is dedicated solely to Turnbull’s various early interpretations of the human head motif, including a series of seven masks that the artist made in 1953, which in his own words’ attempt to fix that which is most continuously fleeting and mobile – the expression on a face. Designed to be mounted on the wall, these masks demonstrate the introduction of figuration into Turnbull’s work. The head also appears in numerous paintings from the 1950s, three examples of which are on show, including a sizeable 60-inch-high canvas entitled Calligraphic Head, composed of expressive and gestural mark-making and paint splatters. Referring to such works, Turnbull commented that he had not wanted ‘to transpose the head from three-dimensional reality to a flat surface – but to imagine what a head would be if flat (squeezed between two pieces of glass like a micro-slide) and made of paint marks’.

The exhibition also unites seven standing female figures from the 1950s and the 1980s. While earlier sculptures such as War Goddess, 1956, are blocky, abstracted and geometric in appearance, later works such as Paddle Venus 2, 1986, have simple silhouettes, a thin profile and a clear front and back aspect. Seeing these works side by side, one notices unique decorative surface elements of each bronze, such as puncture holes and fine incised lines, and the artist’s close attention to the patination of his casts.

William Turnbull (b. 1922, Dundee, Scotland; d. 2012, London, England) was a Scottish sculptor and painter. He is known for figurative and minimalist Sculpture and abstract painting.

He left school at 15 and worked as an illustrator on detective and romance stories for the local publishing house, DC Thompson while studying art at evening classes. After serving as an RAF pilot in the Second World War, Turnbull studied at the Slade School of Art in London, where he met and became friends with Eduardo Paolozzi. Early disappointment with the British art world led Turnbull to move to Paris in 1948. He met Brancusi and Giacometti, amongst others whose influence remained with him when he returned to London in 1950. Turnbull became a vital member of the ‘Independent Group’ of artists, writers, and architects working at the ICA, which included Richard Hamilton and the photographer Nigel Henderson and Paolozzi. By focusing art on the realities of the modern world, the ‘Independent Group’ was a significant influence on British Pop Art. However, what singled Turnbull out was his interest in and reinterpreted the powerful, simplified forms of ancient and non-western art.

Turnbull’s first one-person exhibition was held at the Hanover Gallery, London (1950). Turnbull’s international reputation was established with his inclusion in the exhibition New Aspects of British Sculpture, held in the British Pavilion at the Venice Biennale in 1952. After that, he has exhibited in many solo and group exhibitions both in Britain and internationally. In 1973, a retrospective exhibition of his work was held at the Tate Gallery, London, and in 1982 he took part in British Sculpture in the Twentieth Century at the Whitechapel Art Gallery, London. He had a retrospective at the Serpentine Gallery, London, in 1995–96 and a major solo exhibition at the Yorkshire Sculpture Park in 2005. A survey exhibition of his Sculpture was mounted at the Duveen Galleries, Tate Britain, in 2006 and 2013. Chatsworth House hosted a large exhibition of Turnbull’s paintings, drawings and sculptures. Offer Waterman has represented the Estate of William Turnbull since 2015.