Interventions/2 marks the first time that the world-renowned artist and activist Yoko Ono presents a solo show in the city of Bristol. The show will take place at The Georgian House Museum, part of The Bristol Museum group, the show’s title refers to just that: an intervention reclaiming the space in a new and exciting way to bring a whole new audience to the Georgian House, who will then be pulled in to explore its significance in Bristol’s history.

By experiencing conceptual art in this unexpected context, it will create a platform as an invitation to all members from all communities to join in the conversation. As we are all co-creators of our cities’ legacy, and art is one of the few authentic platforms that allow us to have difficult but necessary conversations, this will be, in effect, a show within a show.

The exhibition will feature several of the iconic films Yoko Ono made during the 1960s and early 1970s, such as “Cut Piece” (1964/5), “Eyeblink” (flux film no.9 and 15) 1966, “Freedom” 1971, “Fly” ( 1970 directed by John Lennon and Yoko Ono) as well as “Sky TV” (1966/2019), plus a more recent work ARISING that will be an updated version for Bristol that was first exhibited at The Venice Biennale in 2013, addressing the abuse of women. We live in an age where human trafficking is more prevalent than ever , so my aim is to make clear that the slave trade is not just a thing of the past but a modern human crisis – according to Amnesty International it’s at an all-time high – so having the voice of one of the most famous artist-activists in the world is a way to bring a new spotlight onto Bristol’s heritage and involvement with the slave trade ,and as with all great art, it gives us permission to open dialogue and create a better understanding of ourselves and our cities past, as well as its future and what role we need it to perform.

Art is the platform that enables everyone to join in the conversation and I believe it is the job of art to reach out to the broader communities and keep us all engaged. “For me, the Georgian House holds a special place as it was the first museum I ever visited. It was a place of refuge, but over the years the romanticism of the aesthetics started to fade as I began to do my own research and discovered its past and the history of the Pinney family, so the space took on a whole new meaning, forcing me to think about the context of these kinds of places, and not only what they mean to us as individuals, but more importantly what they stood for, and how their creation came about. As this experience became my window onto art and how it plays out as a social perimeter, and how we engage with our immediate environment of museums and galleries, so the shows subtext theme is “Art as Activism “- does art have a significant role to play anymore in the new cultural landscape of social media? Or has the silent fascism of the corporate culture of consumerism finally taken over? We live in the age of the image where technology has become the collective memory of total recall for us all we can now start/stop/pause any given moment in our current personal existence so where will we look for the authentication of our collective past? For many, cyberspace is a new reality, yet we can only bring the past into the future by engaging with the art that exists now, and this is why the INTERVENTIONS/2 exhibition has come into fruition. It hopes to reignite the narrative of art as activism as we all have a voice, yet technology has somehow diminished the narrative for many people activism is central to a peoples response it’s the art of doing that address’s all political and social issues great art connects us to the act of social responsibility so we can make our communities stronger where the true possibility of art unfolds.” – Jimmy Galvin

The current show has aspects of this, but added to it, has Wish Trees, and Yoko Ono’s more recent work, ARISING, which incorporates a filmed element, and addresses the abuse of women by men.

The curator, Jimmy Galvin, says of Yoko Ono’s exhibition: “It is a way to bring a new spotlight onto Bristol’s heritage and involvement with the slave trade, and as with all great art, it gives us permission to open dialogue and create a better understanding of ourselves and our city’s past, as well as its future, and what role we need it to perform. Art is the platform that enables everyone to join in the conversation, and I believe it is the job of art to reach out to the wider communities and keep us all engaged.”

Yoko Ono is an artist whose thought-provoking work challenges people’s understanding of art and the world around them. From the beginning of her career, she was a Conceptualist whose work encompassed performance, instructions, film, music, and writing.

Ono was born in Tokyo in 1933, and moved to New York in 1953, following her studies in philosophy in Japan. By the late 1950s, she had become part of New York Cityʼs vibrant avant-garde activities. In 1960, Ono opened her Chambers Street loft, where she and La Monte Young presented a series of radical performances and exhibited realizations of some of her early conceptual works. In 1961, she had a one-person show of her Instruction Paintings at George Maciunas’ legendary AG Gallery in New York, and later that year, she performed a solo concert at Carnegie Recital Hall of revolutionary works involving movement, sound, and voice. In 1962, she returned to Tokyo, where, at the Sogetsu Art Center, she extended her New York performance and exhibited her Instructions for Paintings. In 1964, Ono performed Cut Piece in Kyoto and Tokyo, and published Grapefruit, a book of her collected conceptual instruction pieces. At the end of that year, she returned to New York. In 1965, she performed Cut Piece during her concert at Carnegie Recital Hall, Bag Piece during a solo event for the Perpetual Fluxus Festival, and she performed Sky Piece to Jesus Christ during the Fluxorchestra concert at Carnegie Recital Hall that September. In 1966, she made the first version of Film No. 4 (Bottoms), and realized a collaborative installation The Stone, at the Judson Gallery. In the fall of 1966, she was invited to take part in the Destruction in Art Symposium in London, and later that year, held one-person exhibitions at the Indica Gallery, and the Lisson Gallery the following year. During this period, she also performed several concerts throughout England. In 1969, together with John Lennon, she realized Bed-In, and the worldwide War Is Over! (if you want it) Campaign for peace. Yoko Ono travels annually to Iceland for the lighting of her IMAGINE PEACE TOWER, which she created in 2007 as a permanent installation on Viðey Island, Iceland. She continues to work tirelessly for peace with her IMAGINE PEACE campaign. 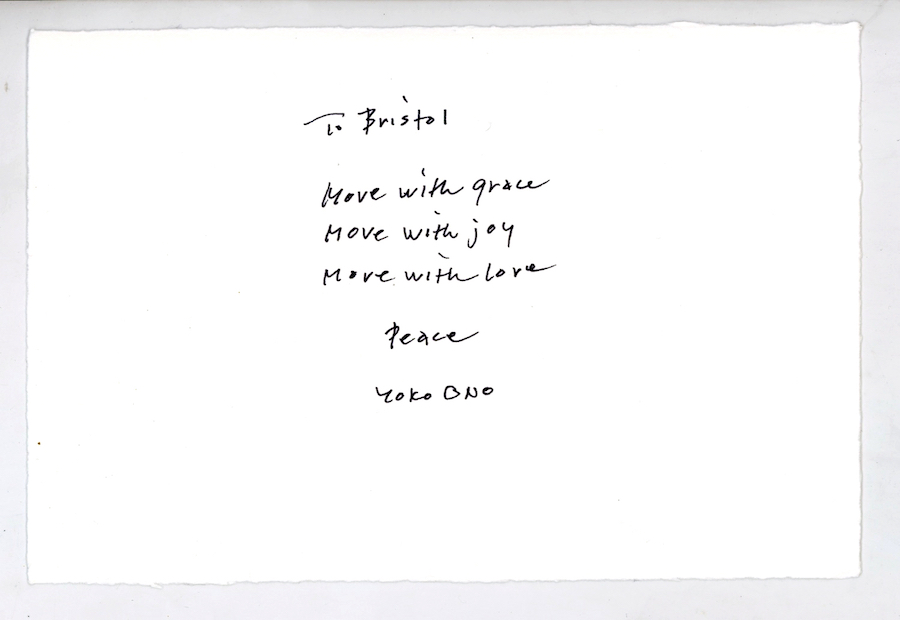 Today, Ono is widely recognized for her groundbreaking films and her radical music, recordings, concerts, as well as her performance art. Her films Fly, “RAPE”, Film No. 4 to name a few, are considered classics of 20th-century film, and her music has finally been acknowledged as the genesis of much of the new wave of musical forms that have circled the world.

Ono has exhibited her work throughout the world, including major touring exhibitions, biennales and triennials. In 2009, she received the Golden Lion for Lifetime Achievement from the Venice Biennale. Her major exhibitions have included YES YOKO ONO (2000 – 2001), organized by the Japan Society in New York, traveling throughout the United States, Japan, Canada and Korea, and YOKO ONO: HALF-A-WIND SHOW – A RETROSPECTIVE (2013) at the Schirn Kunsthalle Frankfurt, traveling to the Louisiana Museum of Modern Art in Denmark, Kunsthalle Krems in Austria, and Guggenheim Bilbao. YOKO ONO: ONE WOMAN SHOW, 1960-1971 opened in May 2015 at The Museum of Modern Art in New York, followed by one-person exhibitions at Museum of Contemporary Art, Tokyo (MOT), and FAURSCHOU FOUNDATION BEIJING. In 2016, Ono’s first French retrospective.

YOKO ONO: Lumière de L’aube took place at MAC Lyon, and Ono’s permanent installation, SKYLANDING, was unveiled in Chicago’s Jackson Park; later that year, a one-person exhibition was held at the Macedonian Museum of Contemporary Art in Thessaloniki, Greece. In 2017, Ono’s works were featured in YOKO ONO: Four Works for Washington and the World at the Hirshhorn Museum and Sculpture Garden, Prospect.4 in New Orleans, Tate Modern, C3A Centro de Creación Contemporánea, in Cordoba, Spain, in addition to her one-person exhibition,

YOKO ONO: TRANSMISSION at Kunsthal Charlottenborg. In 2018, a new version of Ono’s work, ONOCHORD, was presented at Henningsvaer Lighthouse in Lofoten, Norway, and further exhibitions in 2018 – 2019 include Double Fantasy – John & Yoko at the Museum of Liverpool, Catastrophe and the Power of Art at Mori Art Museum in Tokyo, and Buddha’s Life, Path to the Present at De Nieuwe Kerk in Amsterdam. One-person exhibitions in 2019 include YOKO ONO: LOOKING FOR . . . in Cambridge, England, YOKO ONO: PEACE is POWER at Museum der bildenden Künste (MdbK), Leipzig,