Zurab Tsereteli: Larger Than Life, which opens Tuesday 22 January at the Saatchi Gallery, is the first major solo retrospective of Georgian-Russian artist. Larger Than Life is curated by LVMH’s Hervé Mikaeloff and will coincide with Tsereteli’s 85th birthday. On view are paintings and sculptures spanning his early years to the present, showcasing the hugely varied creative output of Tsereteli’s prolific career, including works influenced from past meetings and relationships with influential Masters such as Chagall, Picasso and Rauschenberg.

The controversial Georgian-Russian is known for single-handedly transforming Moscow’s cityscape – so much so people refer to the ‘Tseretelization’ of the city. He is widely known for his striking, large-scale public monuments which can be seen in numerous cities including London, Moscow, New York, Paris, Rome and Tokyo. 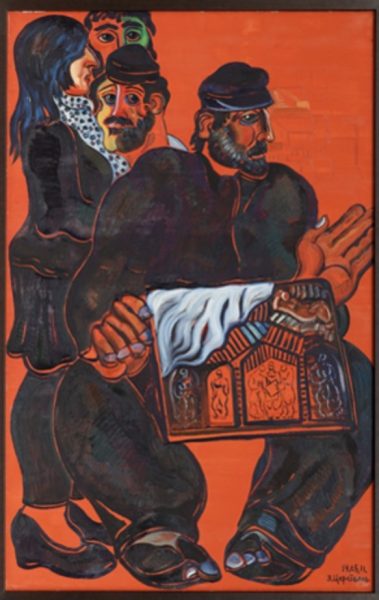 Alongside maintaining his own artistic practice, Tsereteli founded the Moscow Museum of Modern Art, is President of the Russian Academy of Arts and a Goodwill ambassador for UNESCO, under which he brought Mother Teresa to Georgia to found an orphanage. In 2010, he received France’s highest recognition, a Legion of Honour.

Zurab Tsereteli was born in Tbilisi on 4th January, 1934. He took a strong interest in drawing and painting from childhood, encouraged by his uncle – the artist Giorgi Nijaradze.

Zurab Tsereteli was born in Tbilisi to a family of a Georgian engineer and his wife, who, as tradition dictated, dedicated her life to her children. Zurab’s uncle – the famous painter Georgy Nizharadze – regularly brought his artist friends to the house. It was them who became Tsereteli’s first teachers. Even in his first works, produced at school, an air of patriotism and affection for traditional Georgian culture can be seen. His path seemed to be predefined – after graduating from school, Tsereteli entered the Tbilisi Arts Academy.

Zurab Tsereteli during these early years produced work that was greatly inspired by the summers spent at his grandmother’s village. Tsereteli recalls being impressed by the multitude of colours within the white hills of the Caucasus as well as the touchingly simple way of life of the local residents.

Tsereteli is a tireless worker and experimenter, the producer of many innovative works in painting and graphic media, bronze and enamel, tapestry and stained-glass, print and ceramics. At the same time, he has channelled a major part of his creative energy to philanthropy, education and public awareness of the visual arts.