51% Remember Her – 100 Women Artists Exhibit: Heading down the Barking Road to E13 may not seem like the most obvious place to locate a large exhibition of art on International Women’s day. The venue being the splendid Memorial Community Church that contains a tower with a belfry and a grand balcony. Apart from the tower, which has functioned previously as a gallery, such architecture creates a challenge for a curator but also engenders an alternative experience with work constantly revealing itself in unexpected places.

Rebecca Feiner of Elements gallery curated this off-site exhibition showcasing around 100 women artists. She particularly likes the nature of spaces such as this, which demand a creative hang and offer an accessibility to an audience less likely to frequent a gallery. The work being shown encompasses a wide range of scale, media and methods, and joyfully I notice low-tech processes and skilled craftwork, full of new language and shifting priorities sitting alongside large paintings and beautiful photographic work.

The work being shown encompasses a wide range of scale, media and methods, and joyfully I notice low-tech processes and skilled craftwork

Taking a look at a selection of the work reveals the breadth of female concerns in this show. The south hall contains a sizeable painting by Alina Gavrielatos, hung high like religious scenes might be in a great church, but with a bright palate and female iconography. Nearby were hand stitched banners, exquisitely made and with the pertinent subject matter by Tisna Westerhof. Inspired by Japanese war kimonos but incorporating personal photos and newspaper footage, it references the medias’ portrayal of violence. Miyukes atmospheric watery installation in a dark corridor reveals what seems like a sleeping couple, their feet poking out from a blanket. The rippling water is at first beautiful, then sombre as the reference to migrants becomes clear, the sand used in the work taken from the very beaches on which these people arrive, one way or another. 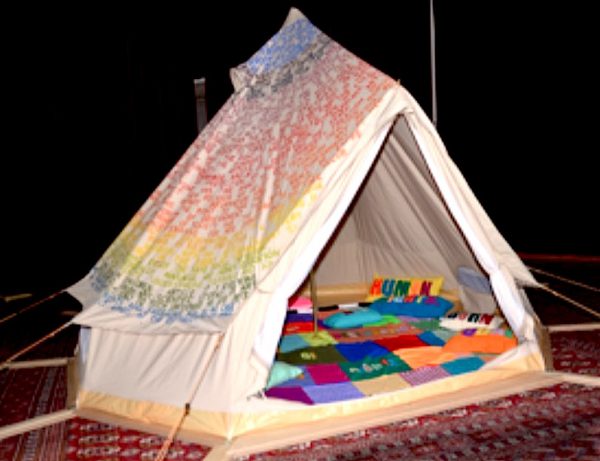 In the main body of the church can be found Rebecca Scotts tent of human rights. It is perfectly placed at the very front of the church a testament to a set of principles that religious and non-religious alike can subscribe and hold dear. Like a tent, there is however still fragility in this set of rights as today’s political arena has increasingly made us aware.

On the balcony, large paintings by Hane Kemfor are framed by the light coming through the windows, which seem to provide a halo of reverence around them. In front of these are many smaller works where I found Tilla Crowne’s framed eggshells with beautiful drawings over them. I loved the gentle use of something usually discarded. One of my favourites was a series of embroidered hangings by Poppy Whatmore. The work consisted of intensely sewn text with needles left in place, it connected with aspects of my own work where stitching and threads can play an important part, but the text was designed to keep us questioning when we thought we had the answer ……who had in fact made a mess of things?

In the spacious tower, artworks appeared on walls, shelves and on the steps too, like Julia Maddison’s soft doll-like figure draped over one of the landings.

The stairs lead up to the bells which have been restored and are a memorial to soldiers who died in the first world war, it felt fitting therefore to find Julie Ann’s hand-made but silent yellow bells made as a memorial to the canary girls, who worked in the munitions factories and whose skin turned yellow because of the TNT they were handling. The photos hanging from the bells connect us face to face with the women, who played vital roles and sometimes lost their lives doing their bit, like the men.

Curator Rebecca Feiner points out “Women are half of our history, half of our present, and half of, all our futures”. A fact that still needs asserting.

The people of Plaistow and the east London area played an important part in the Suffragettes, and the movements to gain rights for workers and women. This show is a testament to east London women artists and their role in change and activism, and it’s valuable to see such a diverse group continuing this tradition. There are performances and events on Saturdays throughout the exhibition and plenty to see, from drawing, painting, photography, sculpture, installation and film. Definitely worth a journey down Barking Road.