As is becoming more and more apparent, contemporary art in the United States is becoming increasingly regionalised. Which is to say, identified with one geographical location: California North or South, Louisiana, New Mexico, Seattle – rather than being an expression of American culture as a whole.

There are two exceptions to this. One is Feminist Art. The other is African American Art. It is noticeable in connection with this that when the United States is asked to represent itself at some significant art get-together, such as the Venice Biennale, the choice increasingly tends to fall on some prominent member of one of these two artistic communities. Nor is it surprising to find two major commercial galleries with strong American connection hosting shows by prominent African-American artists at the time of Frieze.

At David Zwirner there is a show of work by Kerry James Marshall. Kehinde Wiley is also prominently featured in the National Portrait Gallery’s current exhibition devoted to the life and career of Michael Jackson. And at Pace London, there is an ambitious show Adam Pendleton, less well known here but famous across the Atlantic.

Where Pendleton is concerned, the gallery announcement makes clear the breadth of his ambition. He, it says: ‘is known for work animated by what the artist calls “Black Dada,” a critical articulation of blackness, abstraction and the avant-garde.’

In other words, he is determined to be part of the main story, not just of some segregated cultural component.

The same determination can be found in Kehinde Wiley ambitious figurative compositions, in a style best-described as Neo-Baroque. Wiley also figures at the NPG, with an equestrian portrait of Michael Jackson, derived from a work by Sir Peter Paul Rubens.

There is almost nothing of that sort in the show at Zwirner. Instead, there are one or two radically abstract compositions, and a couple of post-Pop works, satirising the greed of the art market.

In both cases what we meet are hip, sophisticated operators, very much aware of the foibles and follies of the contemporary art market. Entirely in tune with the fun and follies of Frieze.

How durable this work is likely to be, once the historical moment that produced it is past, is something very much in question. These are both men of their time, speaking the artistic language of their time, ambitiously moving towards the centre of a culture that marginalised their African American predecessors. 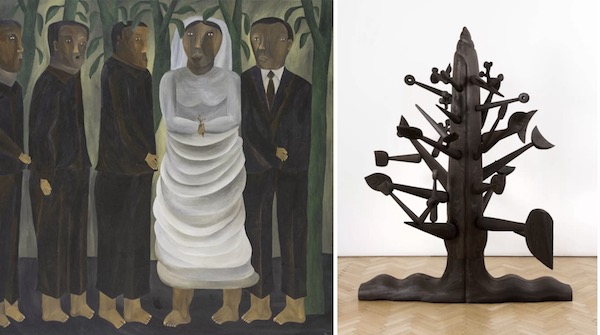 As it happens, there is another, very different ‘African’ show in London that raises this question, perhaps without really intending to do so. This is an exhibition called Forest and Spirits: Figurative Art from the Karthoum School now visible on the lower ground floor of the Saatchi Gallery.

Here a group of artists from Africa itself are moving into the light of Western recognition. The techniques used are Western, the hierarchical images on the walls are not. Even the metal tree that forms part of the display, its branches apparently made up of weapons, has something intractable to say. The statement seems to be: ‘We are what we are – get used to it.’

At the same time, however, the presence of these works in a major London gallery is a statement about how various the art world has become. Hip and New York are now only a small part of the dynamic.