Artlyst recently attended the press view of the Royal Academy of Arts’ landmark exhibition of the Honorary Royal Academician, Ai Weiwei. The exhibition includes significant works from 1993 onwards, the date that marks Ai Weiwei’s return to China following more than a decade living in New York. The acclaimed dissident artist has created new, site-specific installations and interventions throughout the Royal Academy’s spaces. But does the exhibition live up to Ai’s weighty reputation?

The focus of the world’s attention on the artist has been his ongoing struggle with the Chinese government – while curating his own international exhibitions by proxy – the majority of coverage has eclipsed the artist’s oeuvre with almost daily updates on his political plight. What is often forgotten is the artist’s deft take on the Duchampian. A coat hanger bent into the shape of Duchamp’s profile, the hook forming a question mark, is an obvious homage, but the ready-made appears throughout Ai’s work; and notably the symbol of daily Chinese life; the bicycle transformed into the centrepiece of the retrospective: as a grand chandelier. The majority of the works represent the everyday in the midst of transformation. 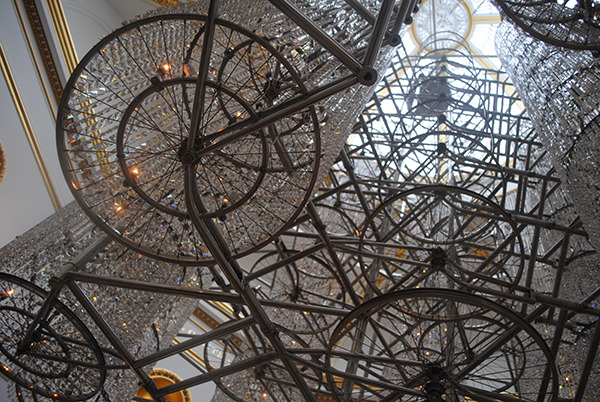 Ai Weiwei’s Grapes, 2010, a cluster of Qing stools, is a prime example of that transformation in contemporising the traditional in a spiralling cartwheel of joined stools. There are many re-workings of the Duchampian and ‘surfacing’ of the historical: Chinese vases coated in high-chrome paint, Coca-Cola inscribed on a 2,000-year-old bowl: all evoking questions regarding Chinese history and contemporary values.

One of the particular highlights of the exhibition and a work that truly shows the artist at his most poignant, effective – and scathingly political – is the work Straight. The huge installation is of the very metal rods that were embedded in the concrete of failed structures that collapsed killing 5,000 children who died in the 2008 Sichuan earthquake after the rods gave way, collapsing their schools. The work is at once conceptual and memorial; it epitomises Ai’s ability to humanise contemporary art even above politicising it.

The twisted metal rods were bought via varying sources to make sure that the Chinese government did not know that the rods were being acquired by the artist. The rods were then painstakingly straightened by hand by Ai’s studio team, an d grouped to form a kind of wave; a movement in the earth’s crust perhaps, or a seismic read-out on paper. The very act of straightening is an act of devotion; memorialising those killed – and is again a Duchampian and transformative act. The final gallery presents perhaps Ai’s least subtle work S.A.C.R.E.D, yet one of his most intriguing, hidden within six rusting tanks are scenes from Ai’s prison cell. Each diorama presents us with a highly detailed image of the artist’s padded cell in which he spent 81 days of political incarceration with two guards always no more than a metre away. The viewer is presented with a number of sights: Ai being interrogated, being watched as he goes to the toilet, or is sleeping. Scrutinised on a daily basis by the eyes of his watchful guards, dehumanising and intimidating.

The artist used his skills as an architect as well as his artists memory, to recreate the cell in extreme detail, chronicling the government’s techniques of state-sponsored political brutality; and reducing the size of the figures including Ai by 50% only adds to the claustrophobia. The work is an act of defiance, an attempt at possessing the memory, and regaining control; and cleverly as the viewer peers through the slits in the metal tanks in an act of viewing the dioramas, Ai’s changes the hierarchy of power. We the viewer are now watching the guards – as they watch Ai. We are witness to their intimidation, political oppression is unmasked, the door is open, and the artist is free.