Despite its title, Coca-Cola Girls, Alex Katz’s new show at Timothy Taylor doesn’t really belong in the realm of Pop Art. It does, however, have something in common with the concurrent Richard Smith show at Hazlitt Holland-Hibbert. Though Katz is a figurative painter and Smith produced abstracts, both were touched with the Pop spirit, without really fully surrendering to it.

Even more than Smith, Katz belongs to a long gone, faraway world that is suddenly becoming visible again

Aged 93, he is still busily at work. As the press release for the show reminds us: “The Coca-Cola Girls were an integral focus of the company’s advertising from the1890a through to the 1960s, emanating an ideal of the American woman.., In the context of pre-television advertising, the wall decals and large-scale billboards depicting these figures made a significant impact on the visual language of the American urban landscape.”

Katz makes no critical gestures towards this. Talking of the uniformly warm red of the backgrounds in these paintings he says: “That’s Coca-Cola red, from the company’s outdoor signs in the fifties… you know, the blond girl in the red convertible, laughing with unlimited happiness.” There’s nothing here that evokes the anxiety of Andy Warhol’s Marilyns, which constantly remind one that their subject was dead or soon to be dead when they were made. Warhol based them on a publicity shot made for the 1953 movie Niagara, starring Monroe, but the first paintings in the series were not created till 1962, coinciding with the very moment at which the star committed suicide.

No such intimations of mortality trouble these works by Katz. The images here are of the faces and bodies of serene, generalised goddesses. In one case, what you see on the canvas is just two immaculate pairs of naked female legs. The press release rightly describes them as ‘balletic’. They are also carefully anonymous, even when you see the subject’s face. In in this sense, they are the very opposite of the Warhol images of Monroe, where the identity of the model is very much part of the impact.

Both shows – the one at Hazlitt Holland Hibbert, and this one at Timothy Taylor, mark and impulse to disengage from the nitty-gritty of 20th century Modernism. To celebrate the sweet bits and ignore the sour bits. If only the engagement of contemporary art with contemporary aesthetic and contemporary society could have followed the path suggested by these two Pop-engaged, but not fully Pop exhibitions. In both cases thy invite one to follow a path that wanders odd into the mist of what might have been.

Let me be clear, and I got a lot of pleasure from this show of Katz’s recent work.
Its confident elegance gives one a good idea of why this very senior artist’s reputation, after a period of comparative neglect, is surging back into the mainstream. But the only way in which it seems relevant to what one sees now in the art world, or indeed in the visual world that surrounds one, is, paradoxically, in its determined detachment from the context within which it exists. 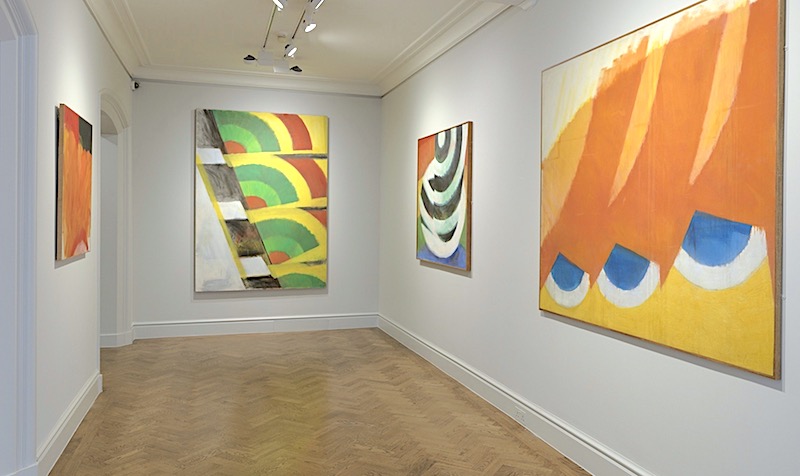 I was very much struck by the effortless elegance of the Uptown/Downtown series of paintings by the late Richard Smith, which have gone on view at Hazlitt Holland-Hibbert. Dick Smith (1931-2016) died fairly recently, at a reasonably ripe age, and these paintings come from early in his career – 1959-1963. Some were made during a residence in New York, culminating in a show at the then influential Green Gallery in 1961, others very soon after he came back to the UK.

It’s hard to think of any British artist of a similar age – late 20s to early 30s – who is making art with this kind of authority now. Or, if a young artist or group of artists with a similar kind of confidence does exist, why they are still underground? They haven’t succeeded in ‘emerging’, despite all those Tate and Arts Council claims concerning the help they give to young artists today.
One asks oneself why not?

It’s true that Smith made his appearance at a crucial moment and had the good luck to do so in a particularly favourable environment. At the end of the 1950s, beginning of the 1960s, the torch was being passed from Europe to the United States, and in particular from Paris to New York. In New York itself, Abstract Expressionism was about to be challenged by Pop Art. A pivotal moment, which I have good cause to remember since I was there on the spot, was Roy Lichtenstein’s first solo show at Leo Castelli, in the Fall of 1962.

As the paintings on view at Hazlitt Holland-Hibbert show, Smith’s work was allied to Pop Art, but not really part of it. In particular, it owed a lot to commercial packaging, such as flip-top cigarette packs, enlarged to grandiose size, and perhaps even more to New York’s huge hoardings and sumptuous window displays. He was never an aficionado of the humbler, more demotic elements in Pop.

As Robert Hughes wrote in Time Magazine in 1975, more or less at the height of the artist’s success: “Colour pages and Bendel’s window displays gave Smith, fresh from the pinched dampness and greyness of England in the ’50s, much the same sense of abundant, amoral pleasure as reflections on water and glowing fruit on a table gave the Impressionists. Their colour was everything that colour in English art was not: exotic looking, artificial and rich.”

But when Smith moved to live permanently in America in 1978, his celebrity gradually began to fade. His patrons never completely deserted him. His huge off-stretcher canvas constructions, dangling from the ceiling, found appreciative corporate patrons, not least because they were both grandiose and safely non-political. But he was less and less part of the scene.

What can one say now, re-encountering these early works? First, that they are well worth revisiting: joyous and non-moralistic, they make much of the art currently being made in Britain look extremely dreary. Second, however, one wonders what sort of place future art historians will give them, after the huge technological revolution now taking place in art has slowed down a bit, or – don’t bet on it – after this has finally run its course.