When the boats sail past on a summer’s day and the light falls gently, and we’re solstice-awake in the long days, Alexander Calder reels back to life as if he himself is a film, viewed in the flickering light of the sea cast by this special spot. We are in the Centro Botín, this state-of-the-art arts centre situated between town and bay, a highly-designed building in a naturally spectacular location. The coast of Cantabria.

The show is unexpected, not a classical Calder show, an exhibition full of ideas – Hans Ulrich Obrist

The black-dendron-tree mobile hangs by the large bright windows, lost blue mountains of Spain somewhere between vague and bold in the distance. The branch of leaves, the sticks of feathers of beads droops lifeless in the gallery, inorganic, but the profound light changes this. These black 2D shapes look silhouettes in the bright sun. They could be hanging in the outdoors, as when Calder exhibited these kinetic pieces where he made them on the move. He would sketch with wire and pliers as he went, using the wire to create drawings in the air. Calder travelled to India, internationally, making pieces and displaying them outside the gallery. 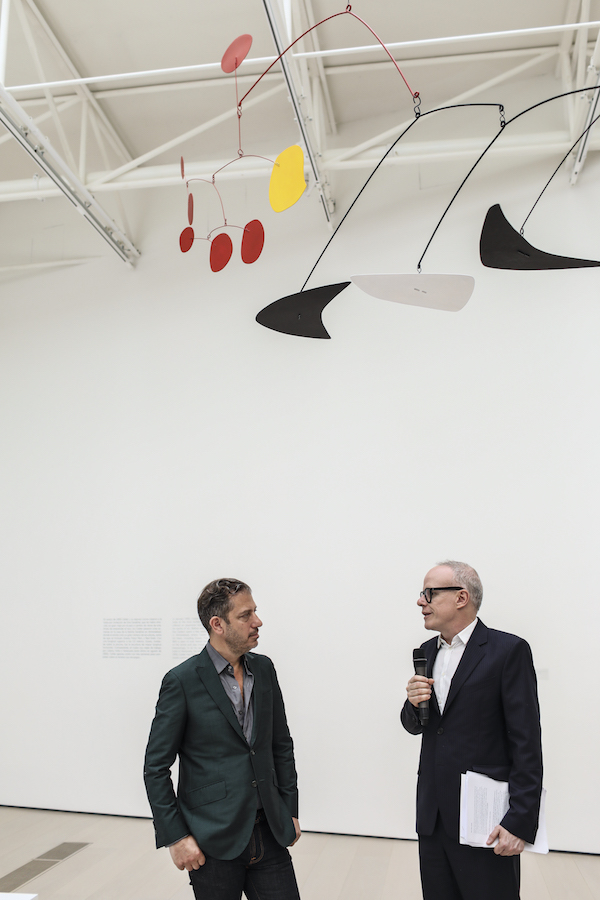 This gallery floor is flooded with light from the south and the north. The mountain shapes of cut out steel cast shadows on the shiny polished floor like on a pool. Renzo Piano, the architect who designed Centro Botín, has designed the installation and made use of the formal features such as the huge windows that bring the picturesque setting inside. But interestingly, you can see how he’s struggled with the limitations set on Calder’s work by his own room. This sea wall is a perfect area for feeling Calder’s connection with the outdoors, with the forces of nature and the psyche. But go closer to the centre of the world and the ceiling pieces are less successful. The power of his hanging pieces get interrupted with the dominant aesthetic of the white gantry-style rigging of the industrial-esque structure.

I have a fascination with Calder, particularly the mobiles. They reduce me back to the intense feelings of a child, connecting with the universe, the young-me who played in sandpits and popped seedpods on the sandy-sunny paths high above Bournemouth. There’s a positive vibration that is not psychedelic, it’s too minimalist for a 1970s take influenced by hallucination and LSD, but it relates to similar internal exploration of perceived universalities, the Romantic vision of a child’s eye.

To paraphrase his grandson, also Alexander, children are drawn to Calder because he taps into universal energy. That shortening sounds terribly hippy but connects with advance thought. Scientists are keen to depict such energy principles, to create 3D models that move and represent abstract ideas of waves, shapes, change and difference. These are not conscious translations, representations of process and system but they are the human reference point, intuitive response to feelings of universal energy principles.

Hans Ulrich Obrist has been collecting information on unrealised projects of artists since 1990. Today we see the fruit of his interest as applied to the Calder estate. There are maquettes, preview-style animatics. There are plaster casts which map out projects for large-scale concrete structures, sculptures for outdoor spaces that should if ever realised, be vast and intimidating, instil a frisson of fear. Alexander reaches over and spins a model. It turns, it swings around in a circle. Imagine, he says, if this was an enormous concrete sculpture. People, he says, get the wrong idea about these sculptures. They have later been manufactured in bronze on a domestic scale. And I can see why as they are desirable objects on a small scale, speaking of movement, angles and influences. But this was never their intention. They were wild, outdoor pieces, threatening and moving, using physics of balance and counterbalance to impress and disturb. It’s very much a late Romantic vision, to create work that intends to physically awe and inspire, to generate an emotional connection to space.

Other pieces include the motorised model for Heath Robinson style kinetically ambitious piece with different models revolving at different speeds. This too was intended as public art, to be installed out in the open in New York (maquettes for the 1939 New York World’s Fair). I increasingly become aware of that many of Calder’s public commissioned pieces were never built, displayed, realised. There’s a tree-like sculpture which mimics foliage, a set to house a lion in a zoo. I feel momentarily sorry for the lion, expected to pose for the public by the metal tree and feel it may have been a good thing on this occasion that this project never saw the light of day as zoo design. But this only takes place in my own imagination. And the stories are indeed enhancing my experience beyond tactile witness of 3D exhibits. I am conscious of appreciating exhibitions in the way in any case, as a gallery visitor I am always conscious of the metatext and the broader visions that are created beyond the observation of an artwork, the imaginary-film that plays in the mind. 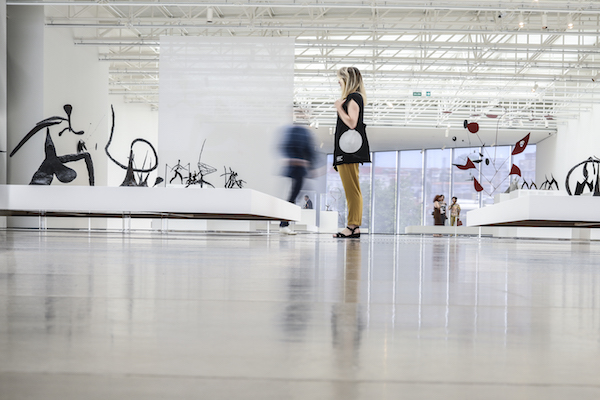 Obrist is intensely committed to his project of making visible artistic ideas. He brings the artist’s imaginary theatre into perspective. He says this is my rough paraphrase, ‘The show is unexpected, not a classical Calder show, an exhibition full of ideas. If you don’t get the stories, you’ll miss the point.’ There are many ways in which artists’ projects may be unrealised, some of which are displayed here. An idea may be too small, it may be too big, or it may be rejected at the last hurdle, like the proposed Chase Bank gates (Jean Dubuffet got the commission in the end), the maquettes for which are on display. Obrist’s enthusiasm for these stories is still boundless, years and years into his project. I wonder if he will ever slow down. His capacity for generating these interviews with significant artists, is boundless, as he builds his personal archive, his own unrealised idea, that of a repository of these stories. The interview project will become a museum. That’s his dream.

I spend some time in the shadows of the exhibition with the animatics playing out to a series of classic and not-so-classic art-music choices made by Gryphon Rue, Alexander Calder’s great-grandson. With Renzo Piano, the architect of the Centro Botín having installed the exhibition, this is a family affair, an extended family affair. There’s a sense of camaraderie between the artists, the install, the centre that’s quite touching. In the male grouping of talent, only one woman makes an impact, she’s present but absent, the film-maker Agnès Varda. Friend of the Calder family, I look forward to seeing her final film. Perhaps influenced by Laura Mulvey, who introduced the movie to me, ‘The Gleaners and I’ has become one of my favourite films. I’m eager to see Varda on Calder. The promise of this film, for me, is the unrealised project of Calder Stories that sticks in my mind. Can I see it soon, please?