Straight from a busy week at Art Basel, I was delighted to attend the first edition of the Allora festival (Art & Cinema) in Ostuni, Puglia, which took place at the end of June, not only as an Art lover but also as a Puglia lover. To see the roster of Hollywood stars and Oscar winners such as Oliver Stone, Edward Norton, Matt Dillon and Marisa Tomei, as well as the legendary British actor Jeremy Irons in this small city, in the heel of Italy, was exciting. Known for its beautiful beaches, luxurious Masseria, its Baroque architecture and delicious food – the Burrata, in particular, Puglia was under the spotlight with an intense programming of movies, masterclasses …and Art. 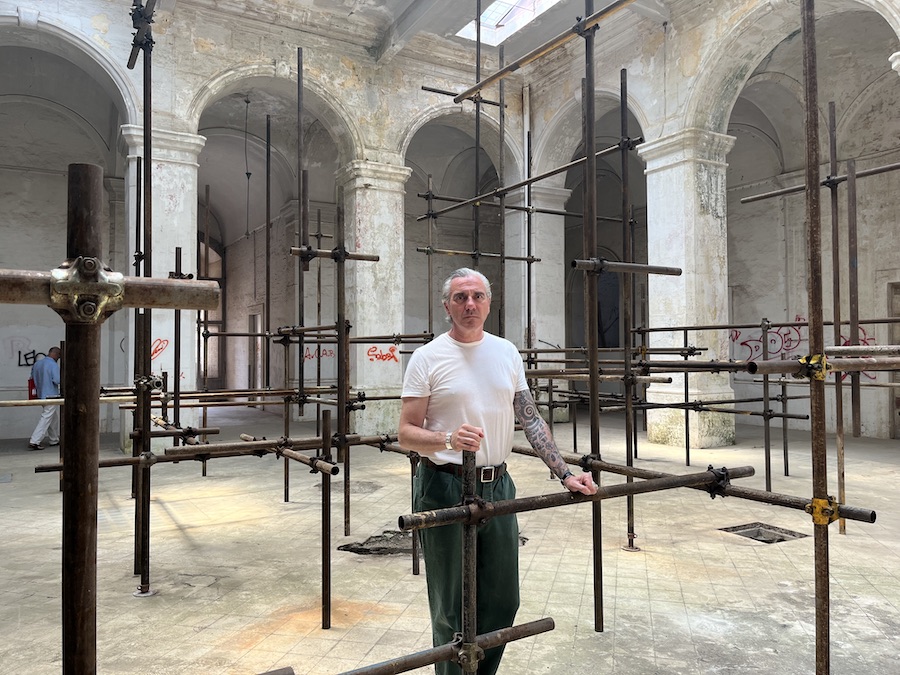 I focused on the three main art projects curated by the two Artistic Directors of the Festival, Sol Costales Doulton and Silvia Bezio.
Sol Costales Doulton invited the Rome-based artist Paolo Canevari to present an in-situ installation in an old Tabacco factory which has been abandoned for years. The majestic building, soon to become a hotel, provided the perfect space for the Italian artist to express his practice, sometimes defined as “Baroque Minimalism”. Since 2010 Canevari, whose work is rooted in the Classical tradition, has developed a conceptual body of work called “Monument of Memory” that he exhibited internationally, including with Cardi gallery, which represents him.
The Roman artist took over the space with an ephemeral installation called “Innocenti”, named after the brand of industrial pipes used for the construction of scaffolding. Working together with the builders, guided by his intuition and sense of chance, he offered the visitor a poetic, conceptual and somehow spiritual and mystical work that each viewer would read through his own cultural and sensitivity spectrum.
“Innocenti” was a daring installation that established a dialogue with the existing architecture and the space of the old Tabacco factory.
I appreciated the straightforward simplicity of Paolo when he talked about his work: no dogma, just a proposal. As he describes it, “Art is a democratic and progressive language ideally at the service of society and not of power.”

Inside the magical garden of Paragon 700, a luxury boutique hotel in a renovated palazzo, the British-Israeli artist Michal Cole presented a beautiful video performance piece: ‘The Becoming of Mary Magdalene’, 2010, 3.10 minutes.
It is a moving, daunting, metaphoric piece of death and resurrection where the artist’s mouth is shown swallowing (before filming began) and slowly regurgitating a red rose.

The other major Art project of the festival was the Movie by Ken McMullen, “Hamlet Within”, produced by Gisele M. Phillips, Ken McMullen and Martin McQuillan.
Allora Festival was the Italian premiere of “Hamlet Within”, which was shown at Cannes in May 2022. Ken McMullen, who has encyclopedic knowledge, could easily be a match for Leonardo DaVinci: he can talk for hours about Quantum Physics, Art, Shakespeare, and Hamlet, obviously. McMullen worked with scholars, philosophers and prominent actors like Sir Ian McKellen to direct a new version of Hamlet, a part documentary. He deconstructs the classical play and investigates the philosophy and the psychoanalysis behind the myth of Hamlet. The result is a fresh, witty and intellectually challenging reading of the play with a universal message and a truly artistic approach through a cinematic process. Using soliloquies from the play, and poetry spoken in English, French, Russian, German and Mandarin, McMullen, who trained as a painter at the Slade School of Fine Art, handles the camera as his brush to deliver a moving and aesthetic post-modernist investigation of Shakespeare’s masterpiece. Proving that Hamlet is a timeless Masterpiece, the movie “Hamlet Within” is currently distributed not only through the traditional channels of the industry but also as an NFT on the Cineverse platform. After seeing it on a large screen, I could not help thinking that a museum or Art Foundation might even be more appropriate to present it.

I left Ostuni contented by the Art experience and the lavish parties in the Masseria and Palazzo Paragon 700, ready to attend Les Rencontres d’Arles in Provence while looking forward to next year’s edition of Allora!