It is rare that I feel an exhibition is important enough to review twice on Artlyst but in the case of the Abstract Expressionism exhibition that was unveiled at the Royal Academy, last Autumn, I will make an exception.

The show has now moved to the Guggenheim in Bilbao Spain and the hanging gives the work far more room to breath. David Anfam along with Edith Devaney and Lucia Agirre have curated a remarkable event that would make it impossible not to be emotionally charged when viewing. The exhibition in both locations strings together the seminal New York artists as a series of one person shows, devoting a room to Rothko, (square this time) which highlights the shape of the images, Clyfford Still (in the round), a bit of an optical illusion works magnificently and Jackson Pollock and Lee Krasner in the same room!

The Guggenheim curates exhibitions in Bilbao that are worth traveling for

This is a slightly whittled down version of the London show with about thirty fewer works. One or two important paintings are missing such as ‘Blue Poles’ Pollock’s masterpiece which now lives in Australia and the fantastic wall of De Kooning’s ‘Woman’ series from the 1950s. The Guggenheim have made up for a few of the gaps with the display of Rothko’s sublime Untitled 52-53 a massive yellow and orange canvas from their own collection.
This important exhibition ticks all of the right boxes i.e. it presents a strong historical chronology of the genre from its influences rooted in Surrealism and German Expressionism to the breakthrough moment that created Americas first homegrown art movement. 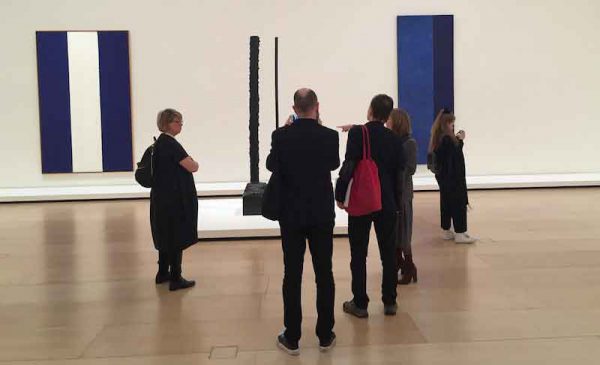