I was taken back to the roots of my love for the visual art on a visit to galleries around Cork Street just before Christmas.

Among the Impressionist, Modern and Contemporary works in the Gallery Showcase at Alon Zakaim Fine Art were works by Marc Chagall, reminding me of the reasons why it was his work that first engaged my interest in the visual arts. At a time when artworks were being deconstructed and new movements focused on pursuing fragments of form or colour, Chagall was a radical reconciler reconstructing the insights of new movements in new forms. In addition, as with many other artists at the time, there was a spiritual impulse underlying his artistic practice, as he sought to draw on the insights of all faiths. It is primarily this impulse that continues to inspire other artists, as is also evidenced in the Alon Zakaim Showcase, which has two large works by Alan Davie, one of which is ‘Improvisations on a Chagall theme No.1’. 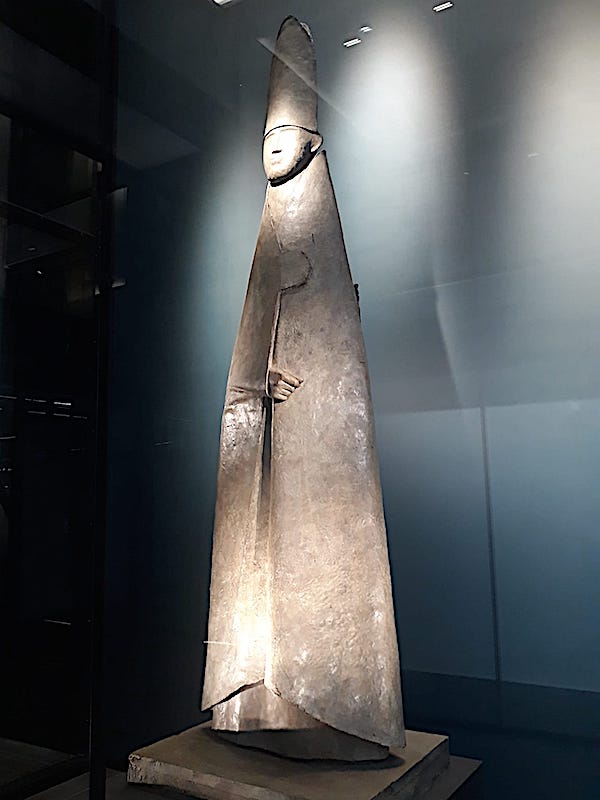 Davie has initially been more interested in poetry and jazz than art. Still, he was particularly inspired by an exhibition at the Royal Scottish Academy featuring work from his former tutor, John Maxwell. Maxwell was a great admirer of Paul Klee and Chagall, and Davie was impressed with the resulting ‘poetic, Romantic nature’ of Maxwell’s work. Like Chagall, who used folklore and mythology as the subject for his colourful and dreamlike paintings, Davie was similarly inspired by developing an abstract language of signs, shapes and symbols referring to mystical experience.

Alok Zakaim are also providing what is a rare showing in London of work by Giacomo Manzù. ‘Grande Cardinale in piedi’ is an imposing bronze made by this important twentieth-century sculptor of religious statuary, best known for the bronze’ door of death’ made for St Peter’s Basilica in Rome in 1964. ‘An Artist and the Pope’ by Curtis Bill Pepper is an engaging account, based on the artist’s personal recollections, of the fascinating friendship between Pope John XXIII and Manzù, an artist supportive of communist politics. To see a permanent work in London by Manzù, go to Westminster Cathedral, which has a low relief bronze wall panel showing St Thérèse of Lisieux.

Small is Beautiful at Flowers Gallery provided an opportunity to see work by artists such as Mark Cazalet, Ken Currie, Susie Hamilton, Maggi Hambling, Nicola Hicks, John Keane and John Kirby, whose work I particularly appreciate. Across the road at Saatchi Yates was an interesting show by St Ives artist Danny Fox, who engages with the folklore, architecture and inhabitants of St Ives in paintings of folksy charm with a twisted core inspired by his return to Cornwall from the US. 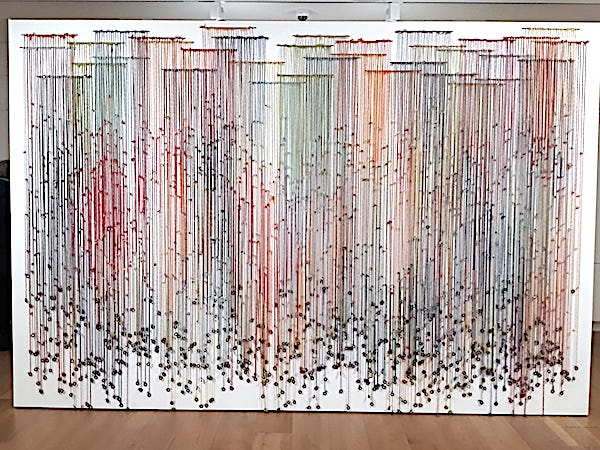 Two other exhibitions visited this month were mainly concerned with materiality. Anna Ray, whose Fibre and Form is at the St Albans Museum + Gallery, absorbs visual textures and structures – networks, patterns, surfaces – from the world around and works with her subconscious while wrapping, weaving, cutting, stitching, staining, to arrive at forms and surfaces that thrill and intrigue. Fibre and Form focus on large-scale sculptural pieces created over the past 20 years and features two newly commissioned sculptures entitled ‘Mesh’ and ‘Rosette’, which have been fabricated during the pandemic, as well as Ray’s seminal wall piece ‘Margate Knot’, initially produced for the exhibition Entangled: Threads & Making, Turner Contemporary (2017).

The other, Hughie O’Donoghue: Deep Water and the Architecture of Memory at Marlborough London, sees O’Donoghue using repurposed materials such as sackcloth, sandbags and tarpaulin as the base for a complex superposition of photographic images with layers of resin, acrylic and oil paint. Through the stunning and subtly nuanced images of shipwrecks, creeks and seascapes formed on the archaeological layers of these works, he excavates childhood memories to metaphorically investigate questions of memory and identity.

Touring galleries in the environs of Cork Street during Advent reminded me that, in the past, galleries would often have used Christmas as a reason to show works utilising religious iconography. That seems to be no longer the case, but, as I reflected further, that seems an indication that engaging with religion is no longer a niche theme for galleries but one that has been mainstreamed. As evidence, we can look at the extent to which the religious iconography of modern or contemporary artists is now explored either as a sole focus or central strand of retrospectives, as with Andy Warhol: Revelation, which is currently at Brooklyn Museum, or Paula Rego/Josefa de Óbidos: religious art in the feminine at Casa Das Historias Paula Rego earlier in the year. Also, the extent to which the religious iconography and themes of historical collections are increasingly being researched, displayed and shared in innovative ways, often specifically with faith communities. Examples range from exhibitions such as Dürer’s Journeys: Travels of a Renaissance Artist with its exploration of contacts with Martin Luther to the National Gallery’s new Sacred Art in Collections Pre-1900 Network and the developing Visual Commentary on Scripture providing online exhibitions in dialogue with passages from the Bible. 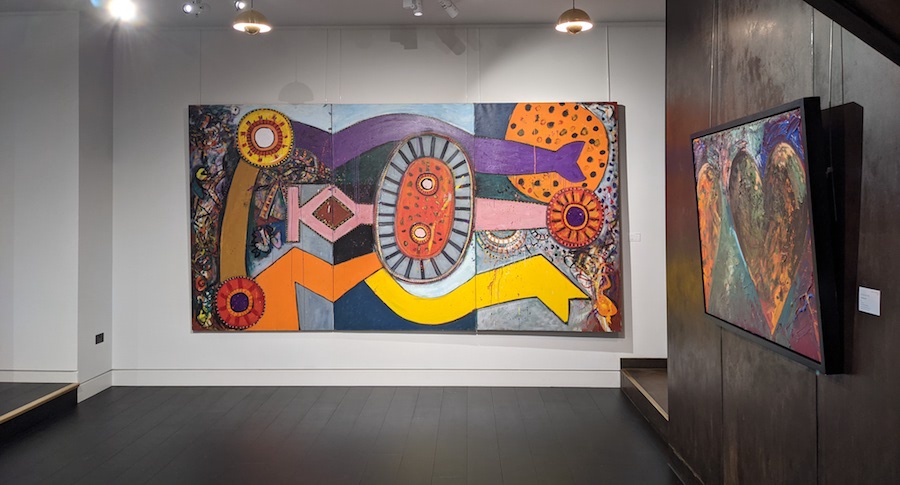 On a similar theme, my current reading is ‘Flight Out of Time: A Dada Diary by Hugo Ball’. Ball’s dadaism was both ‘aesthetic mysticism’ and, as John Elderfield writes, a staging post on his return to religion – ‘the eccentric consummation of his earlier unorthodoxy.’ This book includes Ball’s lecture on Wassily Kandinsky delivered at the Galerie Dada in 1917, which is ‘his most developed conception of the social and spiritual role of the contemporary artist.’ Similarly, Hans Arp read the writings of German mystics during the Dada period, before, after 1945, he ‘turned to mystics from France, Spain, and the United States, such as Bernhard von Clairvaux, St. Francis of Assisi, Hildegard von Bingen, St. John of the Cross, Thomas Merton, and St. Teresa of Ávila.’ Rudolf Suter notes that Arp referred directly to mysticism in the foreword to an exhibition catalogue for the Galerie Tanner in Zürich in 1915, that ‘mystical texts take on greater significance in his work in the two decades following the death of Sophie Taeuber in 1943 and after the Second World War respectively,’ and that his use of paradoxical assertions in his poetry and descriptions of his art may have been ‘inspired by the mystics, who used them to convey that which is indescribable.’

As Ewoud Matthijs Kieft has noted: ‘Close biographical study of the lives of several converts sheds new light on the relation between religion and avant-garde. It clearly shows that even a choice for the most traditional of religious institutes, the Catholic church, did not exclude participation in the most revolutionary artistic movement of the time. On the contrary, Léon Bloy became an influential cult figure in Decadent and Dada circles [Hugo Ball and Richard Huelsenbeck discovered his writings while in Zürich], Otto and Adya van Rees were pioneers in the Dada movement, [Jan] Toorop played a key role in introducing Cubism to the Netherlands, Jacques Maritain became the spiritual guidesman to such leading avant-garde figures as Jean Cocteau and Gino Severini, Pieter van der Meer took part in the Parisian avant-garde, and Max Jacob wrote his most playful avant-garde poetry after his conversion.’

The relationship between the visual arts and religion remains a fascinating area of research about which there is much more to be said and shown.