Arriving at Montparnasse, I don’t at first see any sign of the Gallery Granville. With its modest frontage, it’s located just off-road in a modern shopping centre. The top floor sells frames, objects reproductions of well-known artists, Dali, Picasso, Sagan. It’s a design rather than an art gallery. I am reminded of shops in my hometown of Bolton. Is it a family business run by a family with middle income. Furniture and objects, desks and lamps are visible rather than a single artist exhibition, giving me the impression that this is a centre of interior design. I don’t examine too carefully and come away with an unstudied impression. I learn later that the Granville Gallery is an exceptional, top design gallery with extremely significant clients and artist-list run by Jean-Pierre Bruaire and Catherine Melotte. They represent Elizabeth Garouste, Jean-Baptiste Sibertin-Blanc. Upstairs the gallery houses single pieces from each artist in a combined display.

Down in the basement, I descend to find a compact exhibition by the sculptor Ann Grim, an artist working on impossible and possible futures. Born in 1980, Ann Grim looks forward towards what may or may not be our future. Apocalypse and what the human may become through that dark fire or that infernal flood are her subjects. 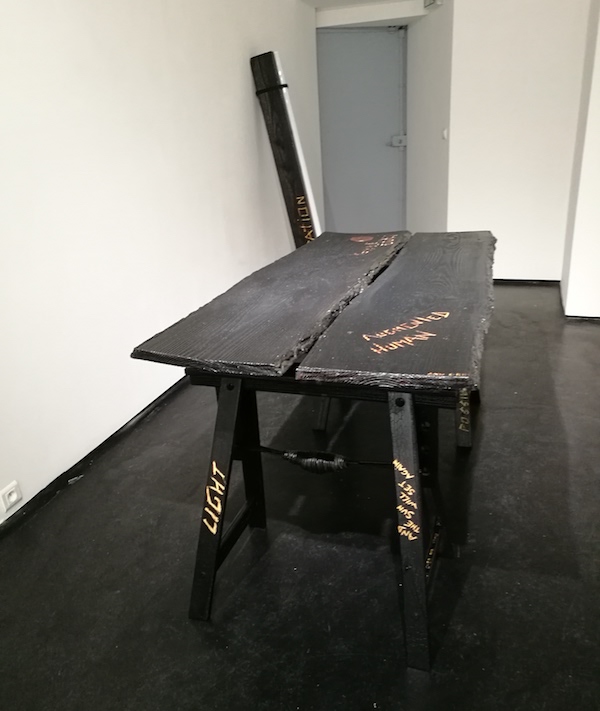 In this under-room, I stand with a collection of painted, pitch-black benches and half-tables. They are carved with wit and fervour like the public sculpture of a neglected park. I imagine robot squirrels clawing and jumping over these structures. The atmosphere takes me back to Manchester and swinging on a broken swing, chatting with friends under a cloudy sky. I think of sandpits and chewing gum. Jeans, t-shirts and puberty. Gauche, stiff amateur carving that suggests ancient runes, the power of words, the Teutonic legacy, Odin watching us all.

Yet despite this end-of-the-world setting, some phrases are positive, or potentially so. ‘Anticipation’, ‘start over’, ‘possible futures’. The juxtaposition of text and object provides the necessary tension that sparks questions. This is art to make you think, not simply an exercise in admiration or enjoyment. But there is an enjoyment too in this twisted playfulness. She’s walking a line between seriousness and jokes. Exploring an area between sci-fi and fine art. There’s a debate beyond the visual and a story at the back of the piece, starring yourself. These objects create a kind of setting for a film.

One of Ann Grim’s major influences is the film Bladerunner (1982), in particular, the experimental Nexus-& Replicant known as Rachael Tyrrell. A hybrid young woman played by Sean Young, she occupies a place between machine and human, with an impossible perfection in her looks, and an over-considered, careful speech. This character has influenced Grim’s vision and is an example of a self-engineered future for humanity. A bio-engineered option.

Looking closer, these words are carved roughly, geometric, in the style of ancient runes. This could be powerful objects calling on Odin, for example, that seeker of wisdom, who sacrificed his own eye to know more. Grim’s objects may contain secret mystery if only we know how to look. And is it worth it? There’s a threatening nature to them, heavy in their blackness, their burnt wood surface which the scars of letters break, cutting down to the organic, pale wood beneath. Runes were carved in Yggdrasil at the centre of the Norse cosmos by the Norns. Is Ann herself a Norn? I don’t have to believe in magic to be unsettled or to find a narrative resonance with ancestral tales.

The monumental pieces, the thick slabs of the benches, are discarded urban planks, or at least they look like they are. Is there a localism to Grim’s choice of materials? It is a question each artist dealing with environmental issues has to ask, how far to go in following good ecological practice in fabrication. She uses offcuts of woods from wood machinery, leaving them unfinished, raw. Whether this is appropriate or not, Ann Grim’s work and the Granville Gallery reminds me that art can be found in somewhere not so very important at all, on a blustery park bench in Bolton or carved by a disaffected teenager with a penknife into a rotting fence. Paris remains not only for the rich and the old, the poor and the young, they are everywhere. Life is getting harder, and smaller and we are hemming ourselves in, waiting for the end of things. Grim is looking through an impossible divide between us and what-is-to-come, forcing her own eyes open. It feels to me a dangerous business which has something of Punk rock and Neil Gaiman rewrites of Norse legend.

Philip K. Dick novel raises questions of empathy. Is empathy purely a human ability? And how might humans judge their own non-human creations? Will they dismiss them as less valuable because more mechanical and also be threatened by the capacity to surpass humanity itself?

Grim is carving positive messages into the dark, but how deep do they go? For me, it is a frightening thing to imagine the future as one where humans are not going to be defeated by an apocalypse of their own making, but to evolve beyond it. Will they, and their self-evolved selves, go to war with themselves or with those they meet in the greater cosmos? Poo