After catching only the last few moments of the atmospheric Faust (2017) at the 57th Venice Biennale, I was excited to discover that Anne Imhof was this year’s BMW Tate Live commissioned artist. Now well known for hardcore performances that capture the anxiety of a new generation, Imhof was relatively unknown at the time she took over the German pavilion, going on to win the prestigious Golden Lion for what became the most talked about work of the event.

It’s a truly immersive piece that ignites the senses – MLJ

For the Tate commission Imhof has created an impressive large scale installation that combines structural interventions, painting, sound, and lighting, and includes six nights of durational performances exploring the fluidity between binaries such dark and light, fast and slow, sound and silence, male and female, and the blurred line where two opposing forces meet. The performance begins with stillness and silence before unleashing strobe lighting and thrashing heavy techno against a backdrop of industrial concrete in the Tate’s South Tank. It feels like you’re lost in an underground German techno party with a classical twist, every now and again a bit of opera and ballet gets dropped, and you become trapped between the lights, the bass and the anticipation that something big is about to kick off. 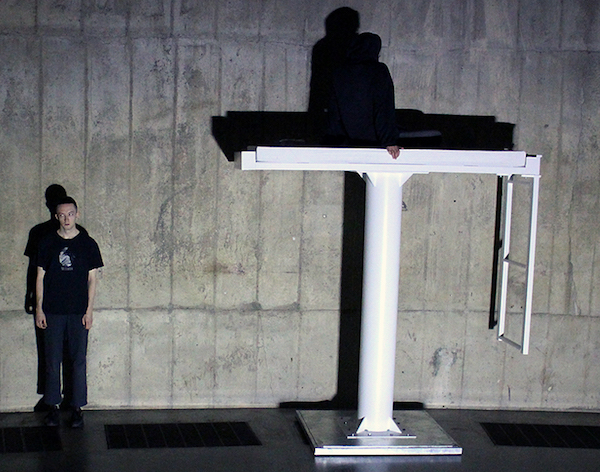 It’s a truly immersive piece that ignites the senses, 24 hours later it still resonates in my body. I sit now in the studio and within each silence, there are echoes of the experience. You are both passive observer and participant in the act, in the building up of tension, energy and atmosphere, at times literally being shoved by performers storming through the crowd. There is a constant intensity that Imhof is so great at, confrontational even though the performers never directly look you in the eye, they overwhelm you with their bodies, opposing movements are animalistic but also refined, and at four hours long is a marathon as well as a sprint.

The dualities being explored are expressed through the structures, in one room you are elevated above the performers whilst in the mirroring room, you are below them looking up. Against the wall are glass partitions, half are white, half black, the paintings on the wall are two blocks of colour. Imhof focuses on dichotomy – doubling, even with the title, the word sex can have the double meaning of intercourse or gender. The design elements are crucial to the experience, with the freedom to explore as you wish, there is also (what I think is intentional) restricted visibility and chasing the performance from one room to the next, jostling into position for a good view.

There’s a very fashionable contemporary aesthetic, everyone in urban attire looking fresh out of a Balenciaga streetwear ad, androgynous, cool and effortlessly sexy. There is a strong presence of mobile phones (as well as a whole lot of vaping!) All performers have phones with Imhof present in the crowd texting instructions directing the artwork live from the audience. Smashed mobiles are exhibited on the floor, which led me to wonder if they allude to the duality of a tool so integral to our daily lives. Perhaps a social commentary on a device that both connects us whilst simultaneously isolating us from each other.

In a continuation of binaries, the performance appeared to represent reality but also seemed very staged. Real life is not as sexy, fashionable and dramatic as displayed here, but as suggested within the performance – in real life we all have personas that we present to the world on our own stages, whether virtually or in personal interaction. We are all of us performing, in a constant pretense of being something that we are not. 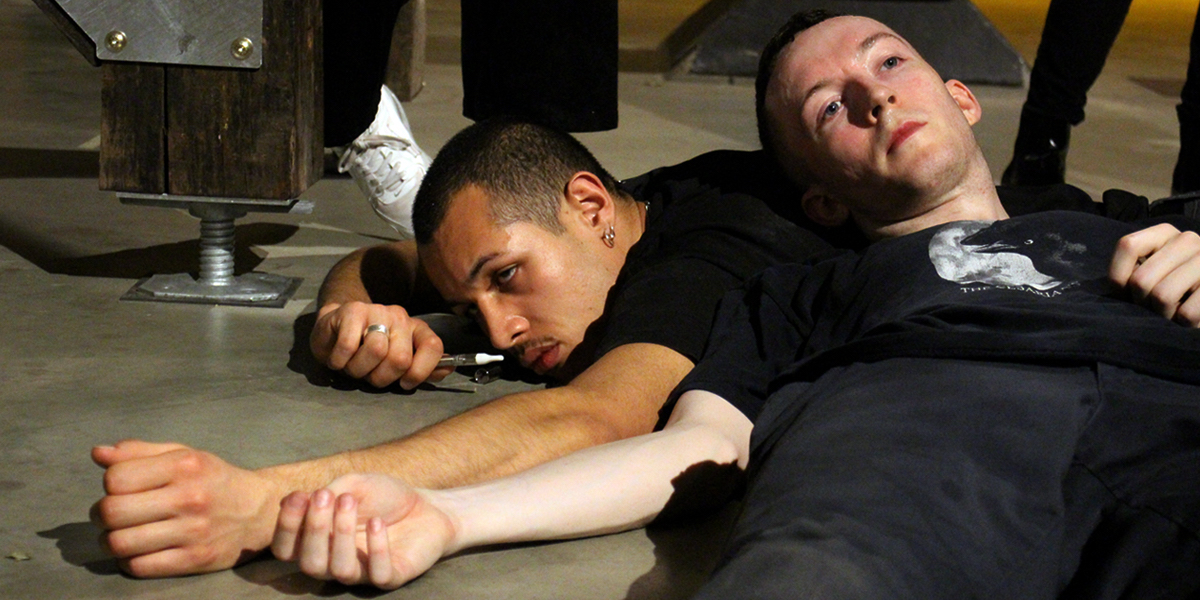