Quite frankly, Anni Albers is a peculiar choice for a Tate Modern solo exhibition.  I realise the lines between fine and the applied arts have been blurred and barriers are no longer an issue, but this show at best is a room and not a full-fledged exhibition worthy of carrying an admission charge of £18. In fact, it would have been better suited to the V&A rather than in the same rooms that previously presented Picasso 1932, Modigliani, Paul Klee, Sonia Delaunay, Giacometti, Agnes Martin and Tate Modern’s most successful show ever, Matisse Cutouts.

The exhibition is an attempt to reinforce Albers’ significance as an artist. 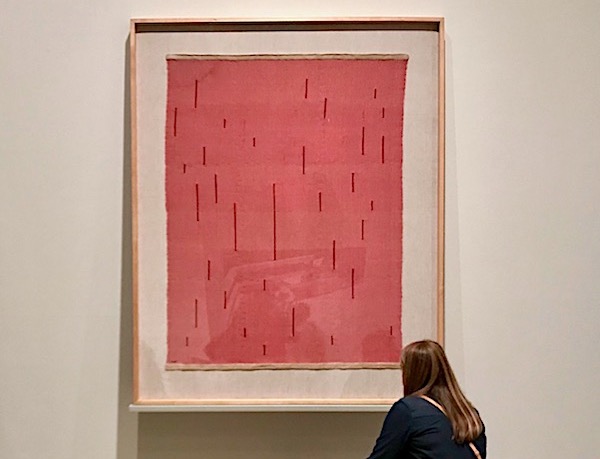 Tate bills it as, “Opening ahead of the centenary of the Bauhaus in 2019, it is a long overdue recognition of Albers’ pivotal contribution to modern art and design, and part of Tate Modern’s wider commitment to showing artists working in textiles.” I think it is important to point out that a comprehensive exhibition of Bauhaus painters would have been worth the wait and this show of weavings which were once utilised as rugs, wall hangings and scarves (Form Follows Function) is not substantial enough to merit the attention.

A recent exhibition at the Glucksman in Cork presented both Anni and her more famous husband Josef in a joint show. ‘Voyage Inside A Blind Experience’ explored Abstract Art alongside tactile models. It was far more appealing than this current show. It also allowed the visually-impaired access to the work, reflecting Josef Albers teaching that emphasised a sense of feeling as well as seeing art. 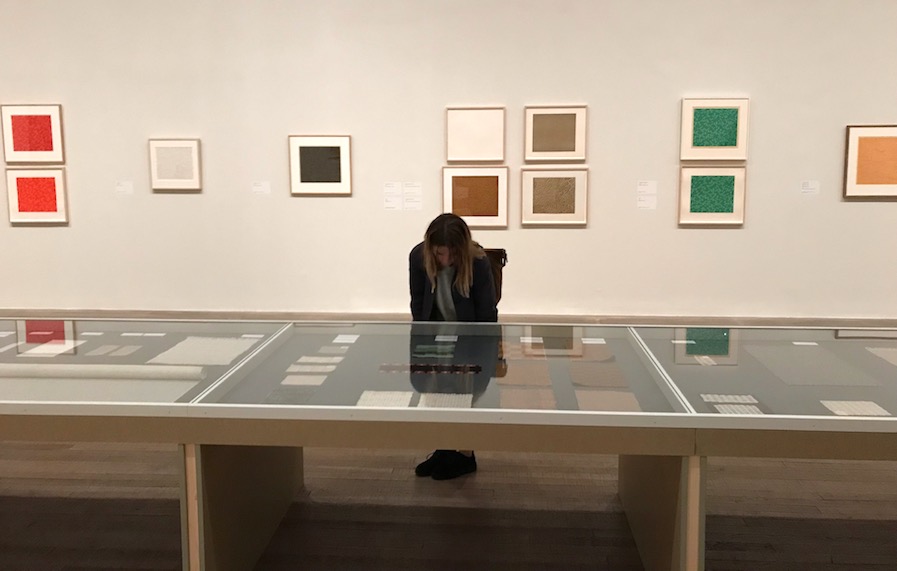 Anni Albers was also a printmaker of some talent. The works, some collagraphic reliefs are an area of strength. Where many of her weavings are out of sorts, in large reflective frames, the prints seem at home hung double, humbled.

The exhibition features over 350 objects. The most impressive work on display titled ‘Six Prayers’ is shown in the UK for the first time. It was commissioned by the Jewish Museum NY in 1965 as a Holocaust memorial. The intricate weavings (unframed) suggest an abstract depiction of Torah Scrolls paying homage to the six million Jews who died in Hitler’s final solution. It is presented in a dimly lit gallery creating a deserved reverence.

The exhibition also displays Anni Albers’ extensive collection of world textiles. This is by far the most interesting part of the show as it becomes understandable that much of her output was culturally appropriated or at least influenced by ethnic crafts. 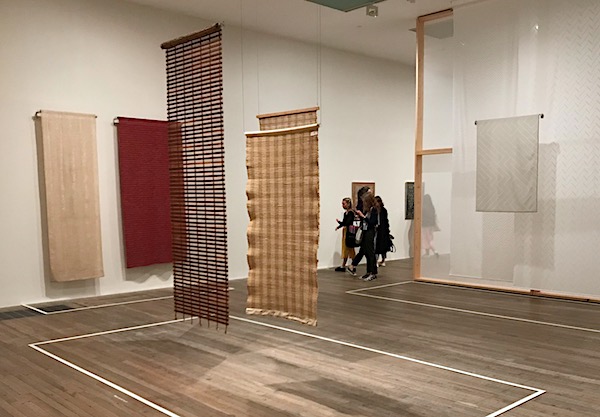 Anni Albers Out of the Frame Display

We know now that Women at the Bauhaus were encouraged to take up applied arts instead of painting and Anni Albers did the best she could within the constraints of a male-dominated faculty at the art school. I love applied arts I have written extensively on the subject but this one in context at Tate Modern leaves me flat.

“Anni Albers was born in Berlin at the turn of the century, Annelise Else Frieda Fleischmann became a student at the Bauhaus in 1922, where she met her husband Josef Albers and other key modernist figures like Paul Klee. It was in textiles that she found her means of expression, dedicating herself to the medium for the majority of her career. With the rise of Nazism and the closure of the Bauhaus, Albers left Germany in 1933 for the USA where she taught at the experimental Black Mountain College for over 15 years.” – (Biographical information courtesy Tate)