Anselm Kiefer White Cube, Bermondsey: In this instance, it seems the perfect place for this exhibition. So perfect I felt it was over-designed. The perspex boxes of wires, cables are too perfectly matching, autumnal; this could be a fashion collection doesn’t Vogue recommend this kind of palette at this time of year, in tweed? Browns, rusts with a splash of turquoise? Nothing vulgar. Nothing synthetic. Organic colours.

Anselm Kiefer’s art is still incredibly powerful and inclusive, to my mind – JCM

But this is art, not fashion and its subjects – if presented on the catwalk or at an interior design show – would elicit some cries of ‘inappropriate’ and worse because Kiefer is an artist who deals in horror, personal, political, historical and psychological horror. This is his subject matter. 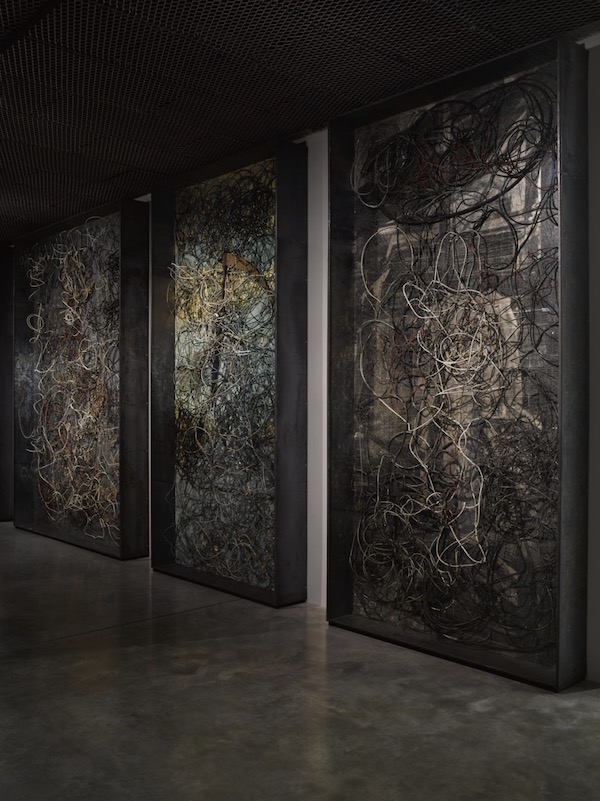 In the corridor, the vitrines line the walls, impressing like the ritual corridors of ancient power. ‘Believe in my seriousness,’ they shout. See I have even become faux-mathematical, I have equations scrawled on my lids through which you see my machine innards. Those equations, you won’t understand them, they’re far too clever for you. Their presence blinds the viewer with science. It tells you that this is not simply an art class you’re attending, but you’ve wandered into physics. You won’t understand, of course, but you can wonder at the glorious ineffable power of formulae.

This collection of cases of beautiful innards is ‘Superstrings, Runes, The Norns, Gordian Knot’ (2019). Its title is also the title of the exhibition, and it brings together the central idea, making it explicit that humanity has become too small for Kiefer’s subject. He has broken out of human tragedy into analysing through paint and sculpture the nature of the universe. Fate is not simply affecting humans but the whole universe.

The paintings show how Kiefer has broken out of the cabins where humans have been confined in tragedy to turn a wide-angled lens on the cemeteries of open spaces, the massacre-fields. The sky spirals in a celestial eye. There’s blood spattered on this wintry palette. Again these huge canvases are oh so tasteful despite their use of earthy organic elements – the corn, the burnt wood, the charcoal dirtying the white paint, but not too much, so it still looks cleanish, like reasonably fresh snow.

These are works created by an artist who works in a barn. They feel open, used to the space of the countryside. Burning books, one of Kiefer’s favourite images, could be so claustrophobic, but in these settings, they stand more like sculptures in the fields. Burnt pages whirl like birds. The cold heat of a natural bonfire burns in these paintings, and even though they ostensibly depict I feel like they are channelling forces of nature. The dark end that winter and bone fires bring to the end of the season rather than destructive human forces.

And so, read like this, in its attractiveness, in its designed unity, Kiefer’s apocalypse loses its power to challenge and point fingers. But I don’t mean to disparage this work. It’s politically directed, still aimed against the Holocaust which some few have begun denying, such is this despicable world of what we call ‘fake news’. Yes, there was a Holocaust. I myself can bear witness to meeting a survivor of Theresienstadt Ghetto when assisting at the Imperial War Museum Film and Video Archive’s Holocaust conference. To return to the gallery – Kiefer’s art is still incredibly powerful and inclusive, to my mind. He works at this scale for all of us, not against us, to impress us, the work does not feel merely impressive and posturing, indeed I feel included in his witness of the violence at this end of the universe. But the work has spiralled out of its human context into a landscape. Without human perpetrators, there is no real accusation, more a depiction of evil forces similar to those in an epic film or a depiction of witchcraft. And that’s what the equations remind me of, a witch’s spell in language that I can’t understand. I can’t understand because I’m not a great artist. Because I’m not part of the secret elite that knows so much. It’s contradictory isn’t it, what I’m trying to explain about how Kiefer’s work makes me feel. Yes, I’m included, and no, I’m not.

The charred runes that decorate paintings bring me back to the Norns of the exhibition’s title, and I think of Ann Grim’s exhibition in which I felt the presence of the Norns in her charred, scarred benches, though Grim employed a positive language which destabilised the dystopian expectations of the future and her chosen medium of blackened, carved wood. At Kiefer’s show, I feel as well as see the spell characters of the Vikings, imbued with magical power, the ancient script of the Germanic languages. What is this power in Kiefer’s painting to which he is referring? Is it the punishment of the Nazi’s? I think this is what Kiefer might say but to be honest, the paintings seem to me to be to be a kind of worship of this destructive power rather than a condemnation. If I read, as I do, this power back as being the dark side of nature, then worshipping it is not daemonic but a form of nature worship.

At the exhibition I raid the bookshelves for more detailed artist reflections published in the excellent books on offer, one of the best things about the White Cube is that such sources are so conveniently to hand, and try to quickly learn from the words of the artist, speeding through the conversations that Kiefer has had about his work. He gives interesting comment on his own life, especially on his experiences of being contained inside houses under siege. The houses were shot. Therefore the houses were opened. No one could be inside. The Nazi ammunition destroyed the houses. Everything becomes opened. There are no walls, no doors, no windows. There is only the outside world. And it is ending in madness and winter fire.