Hot on the heels of the Princess Zeid show at Tate Modern, which runs until October 8th, is a much smaller and shorter-lived exhibition at the Saatchi Gallery, by an artist also Middle Eastern, royal, and female, which runs only until August 18th. The artist is splendidly entitled Khawala Bint Ahmed Bint Kahalifa Al Suwaida. Her father was Minister of Foreign Affairs of the United Arab Emirates, and he was the founder of the Abu Dhabi Cultural Foundation. Her husband is the UAE National Security Adviser. Given prevailing snobberies in the British (and indeed Western) art world, these a pretty heavy burden to bear.

In fact, I found I liked the exhibition rather more than I’d bargained for. It is extremely elegantly, perhaps over-elegantly, presented, with all the works in extremely grand gold frames. A good few of these frames look as if they’ve lived a previous life. I wouldn’t be surprised if some of the more baroque ones had started their careers sometime in the 17th century, enshrining images of the Madonna and Child for church use. 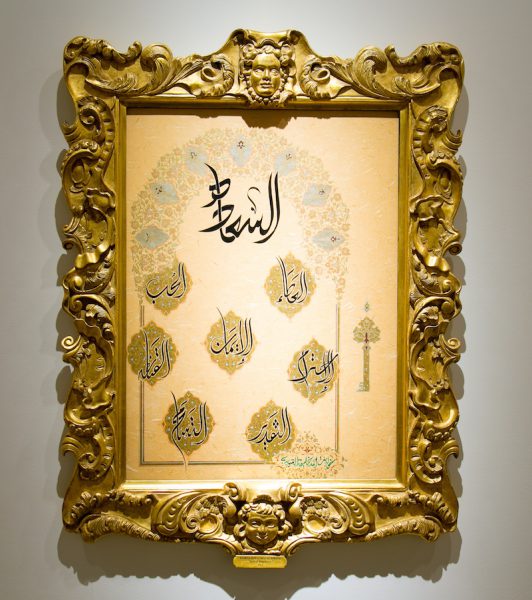 There is not much within them now that inclines towards the figurative. A few images of flowers. A lot of floral patterning. One, not the main thing in the composition, of a young woman in a headscarf, contemplating the heavens. Another, with a youthful couple embracing under a tree, with love birds fluttering above them.

The main vehicle – I say vehicle rather than subject – is superbly confident, boldly decorative Arabic calligraphy. The subject itself, in the work just described, as in all the others on view, is what the calligraphy says. For example, here, duly translated in the catalogue:

‘I beseech you in the name of God

By God tell me, why the

Days fade when you depart?

Why do they bloom when

You’re near to the heart?

Time marvels at your tender

presence in the heart. And

Beauty comes when you depart.

Even without access to the language, however, these are boldly yet intricately decorative images. They speak of a cultural self-confidence that I did not always find in the Princess Zeid exhibition. And, in a paradoxical way, they also speak of the power of language, at least when this is enshrined in a powerful calligraphic tradition.

This still exists in Chinese, where there is no real dividing frontier that separates what is written (a message conveyed in words), from what is conveyed by a visual image. The word and the image coalesce, just as they do in the kind of boldly decorative calligraphic designs that one encounters here. It ought to matter that one can’t ‘read’ these pictures. But in fact, to a large extent, it mysteriously doesn’t.