The underlying momentum of this remarkable and provocatively thoughtful book, The Art Museum in Modern Times by Charles Saumarez Smith, is the development and changes of the architectural envelopes for collections of modern and contemporary art, with an occasional historic collection also included. The galleries are mostly in North America and Europe, with a handful of examples in Japan and South America. We still have our secular temples, with their imposing entrances, all grand staircases, pediments, columns, fanciful, playful or earnest allusions to some classical ideal. Here the sense is of a university outwith the walls. But now what is being offered is more of a diversity of routes, playful and surprising with much more up to the individual and his choices. Nothing is fixed and there are lots of questions. From private collections to public museums, the annotations for each of the 43 museums discussed allude to architecture, the role of the institution, the client, the public and private, and the audience.

“Each entry is a wealth of historic information and comment” – MV

From Frank Gehry’s potently memorable Guggenheim Bilbao, which changed the character of the post-industrial coastal Spanish town, to Richard Meier’s hilltop Getty in California, almost a place of pilgrimage, the very character of the museum experience has changed. The buildings themselves, from adaptations like the power station on the London’s South Bank that is now Tate Modern, to delicately elegant pavilions in Renzo Piano’s Menil Foundation collections in Houston Texas, have changed the way we visit museums. No longer are they didactic carefully controlled, and usually chronological displays automatically set out to tell us things, to educate in subtly formal ways, to provide a course and systematic journey in art historical terms. Now the visitor has to be proactive, often reacting directly to a visual experience without having significant amounts of factual information thrust at him without a pause to breathe. We pace ourselves, deciding what we need; less is imposed and more diverse opportunities offered. 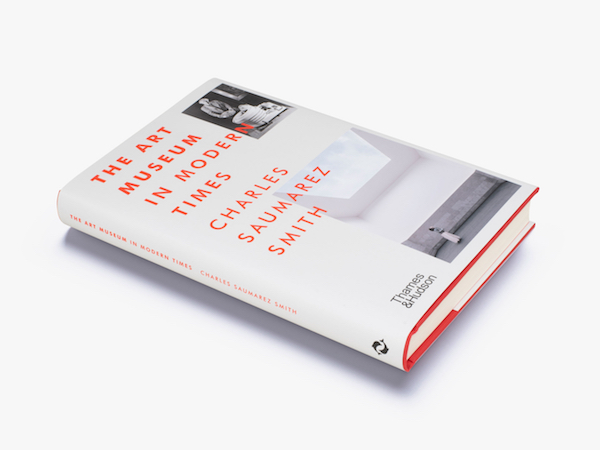 Our guide on this journey, Charles Saumarez Smith, not only possesses an enviably individual name but an astonishing immersion in art institutions and the art world. His career has been profoundly involved with the way art and the public intersect, and this unusual multi-faceted experience has led to an easy way to communicate the current and diverse situation that obtains in institutions open to the public.

He embarked with the substantial and innovative education department at the Victoria & Albert, going on to the National Portrait Gallery, a gallery where the demands of history could trump aesthetics, becoming its Director, then the National Gallery as its Director – Masterpieces – and then the chief executive of the Royal Academy, a Kunsthalle that has to raise all its own moneys having no government subsidy. And of course, he has lectured widely and is currently chairman of the Royal Drawing School. So he has worked directly with artists, curators, significant and leading national collections, and now writes a charming blog, both personal and commenting on issues in art, architecture and culture that interest him.

This compilation is essentially an extensively annotated gazetteer, starting with the new purpose-built New York’s Museum of Modern Art in the heart of Manhattan (which had in its first decade occupied adapted premises) a building of retrained modernism which opening in 1939, and whilst not the first MOMA in the world instantly became – and really has remained the most prominent and influential. (The first such MOMA was founded in Lodz, Poland in 1929 only slightly earlier than the initiative in New York.)

Many of the most innovative post-war buildings are almost exclusively buildings for culture, and much more latitude is available for imaginative containers for the visual arts than – say – for concert halls, which have such specific acoustic requirements as well as accommodation for seated audiences.There are such photogenic creations as Frank Lloyd Wright’s 1959 Guggenheim in New York (he had perhaps improbably tried out ramps in a tiny shop in a mews in San Francisco) Mies Van der Rohe’s 1968 New National Gallery in Berlin (adapted from a design for sugar factory offices in Cuba, pre-Castro, which were never built as the factories were nationalised under the revolutionary government) – modern museums for modern art. By the 1970s, we have Richard Rogers and Norman Foster, with on the one hand the Centre Pompidou in Paris, and the Sainsbury Centre in Norwich; and by the 1990s Richard Meier’s Getty in Los Angeles and Frank Gehry’s Guggenheim in Bilbao. Gehry, originally coming in to advise Bilbao, a depressed post-industrial town, declared Bilbao was a city that needed a smile. These are new builds = there are imaginative and compelling adaptations as well – distinguished by the fact that most are dedicated to the showing of modern and contemporary art. For older existing buildings with historic collections wings or add-ons are included., for example, London’s National Gallery and National Portrait Gallery. The holdings may be public collections made over a period of time by the museum itself or gifts from private donors and collectors or dedicated to single collections as in one of the most remote situated on the ocean in Tasmania. The buildings thus embrace many tastes or one.

Each entry, so to speak, is a wealth of historic information and comment on the interplay of all the components from the commissioning group, to funding, to the chosen architect.

The diversity is astounding. There are event buildings, which are destinations in themselves, such as Tate Modern with its vast playground, the Turbine Hall in its first phase, that dazzling adaptation of a disused power station on the South Bank. The building itself almost eclipses the collection in its drama: the huge Turbine Hall, the two-storey escalators that at first journey did not seem to go where you might have expected, the views over the Thames, the differentiation between the floors of galleries that contained selections from the permanent collection, and the galleries that contain special exhibitions. It is rather clever that the building is such a draw as the international modern collections whilst containing some astounding masterpieces are not as staggering as those contained in – say – New York. And on the other scale, there are such quiet persuasive elegances as Renzo Piano’s Beyeler Collections on the edge of Basel, a sequence of perfectly lit galleries containing nothing but masterpieces.

This fascinating compilation is more concerned with the receptacle rather than the collection. The relationship between the two is of course fascinating, and the unanswered question is how much does the container affect the visitors’ perception of the contents. For the gallery visitor, this is an essential read, which sharpens our awareness of the absorbing complexity of the museum experience. The reader’s experience is further enhanced by the book’s exemplary design, and very well-chosen images of buildings, their interiors, and of individual architects, curators and patrons.