It’s a week of art fairs in New York. The Armory Show, held in a crowded, bustling convention center on the Hudson River is the biggest of the fairs and indicative of the art markets changing economic landscape. The cost of exhibiting in the Armory is astronomical and dealers loath to take risks. Seeing cutting edge revolutionary art is like learning a new language – it takes time to understand any radical shifts in art and absorb what it all means. Wandering through the two huge cruise-ship piers doesn’t foster profound consideration or deep contemplation. Perhaps for this reason, large and pretty paintings by famous artists, paintings that are safe and easy to place in any collector’s home, dominated this year’s show. There were numerous works by Kusama ( Top Photo Victoria Miro Gallery) , Joseph Albers and other tried and true luminaries. For an art fair in the epicenter of the art world, there were very few surprises.

For an art fair in the epicenter of the art world, there were very few surprises

A few conceptual works spoke to the current political times and are worth mentioning. The Recycle Group, a team of two 30-year-old Russian artists, use industrial materials to challenge consumerism, question our technology driven contemporary culture and highlight the tension facing the art world today. Andrey Blokhin and Georgy Kuznetsov’s installation included a large weathered log found on the grounds of their Krasnodar home and inscribed with the words “E Pluribus Unum”, (out of many, one) suggesting we are all united.Carved into one side of the log was the iconic “G” of the Google logo.  The piece, executed in 2015, before the present political upheavals of Brexit and the Trump presidency, touches upon technology and privacy in the age of the internet and questions political appropriateness. Another piece by them at the Suzanne Tarrrasieve Parisian gallery entitled The Ten Covenants is composed of rubber made from recyclable material and is engraved with the Google iCloud terms of an agreement. The Recycle Group will represent Russia at the 57th Venice Biennale this year. 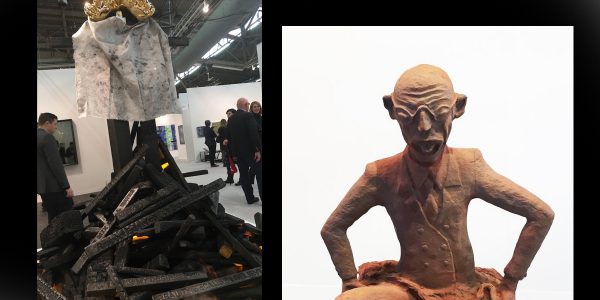 Outside of the Kavi Gupta gallery “Rebus” by artist Glenn Kaino, is a pyre of ‘burning’ organic wood sticks topped by two gold-plated heads draped in a white cloth, The sticks, handles from protesters signs and the charred remains of those signs, are engraved with demonstration slogans. It’s an intellectual and mind-boggling contradiction, suggesting the cleansing of trials-by-fire.  The smoky flame emanating from the “burning” sticks is made from water vapor – light bulbs beneath the piece have been mixed with water to produce vapors- thus the illusion of fire is made from water. The white cloth atop the stack of a smoldering stick is meant to denote a flag of surrender, marrying the opposing forces of outcry and acceptance. The

at the Berlin gallery KOW, jointly presented with the Galerie Fons Welters of Amsterdam were visually stunning and socially provocative. While producing the film “Enjoy Poverty” in 2008, artist Renzo Martens spent time in the Congo where he founded the Institute for Human Activities where the plantation workers sculpt using red river clay. The works are scanned digitally in three dimensions and sent to Amsterdam where they are cast in Congolese chocolate. The two pieces on view depict “Art Collectors,” and the figures look somewhat suffering and exhausted. Profits from the chocolate art are reinvested in the community allowing the plantation workers to buy back land and invest in businesses for themselves. The aroma is enticing and additional pieces by the artists are on view at the Sculpture Center in Queens. 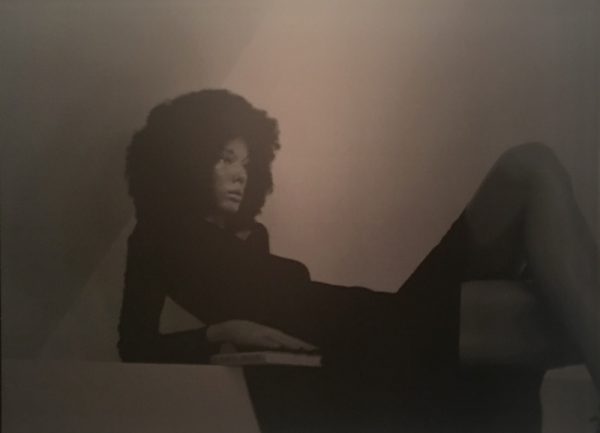 Inside the booth is an equally compelling piece, a stunning set of photographs by Irena Haiduk, an installation artist from Belgrade. Her photos of mannequins dressed in uniforms and cast from supermodels, are part of the Yugoexport mission and will be featured in the upcoming Whitney biennial. At the Whitney exhibit, internet activity will be routed through a .yu server, a now defunct Yugoslav state manufacturer and top domain. Visitors to the Whitney exhibit will be able to join the “Whitney Frauenbank”. yu network, a co-operative women’s domain Haiduk started, and purchase shares in cooperative projects and property endorsed by Frauenbank, a woman’s banking cooperative. 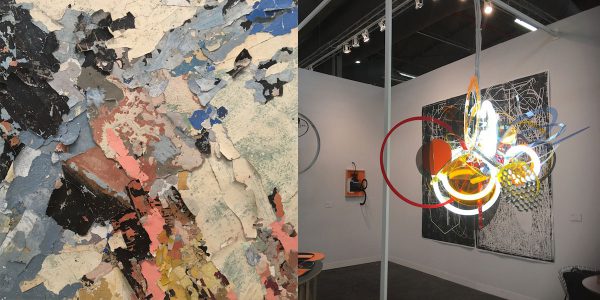 Two Cuban artists, Diana Fonseca Quinones and Rafael Domenech were also worth noting. Quinones’ abstract and colorful pieces were seen at both Sean Kelly and Art Aprartamento booths and are made from layers of peeling paint mounted on wood. The“Degradations” series reflects Cuba’s changing political climate and the cultural peeling away of repression. Rafael Domenech’s work at Fred Snitzer’s booth takes many forms including colorful chandelier type structures made of fluorescent bulbs, plexiglass, and aluminum. The one- of- a- kind objects sing in relationship to his other works represented in the booth including additional hanging works, wall works, and sculptures on plinths. 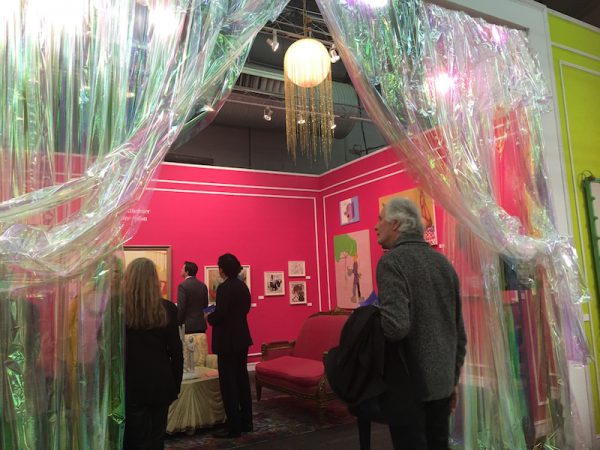 The booth with the most buzz was that of Jeffery Deitch who paid tribute to Florine Stettheimer, an icon of the Jazz Age, a painter and society hostess with modernist sensibilities. The American bon-vivant a la Gertrude Stein,mounted exhibitions of her work along with those of her contemporaries in the early 20th century in a Manhattan salon-setting. One of her most famous paintings, a beach scene of primarily African-American figures, is displayed alongside other women artists influenced by her style. The magenta-colored booth framed by plastic curtains is a mini ‘art fair’ and includes works by Cecily Brown and Laura Owens, The works speak eloquently to each other over a time period from 1934 to the present and even the curated furnishings within the booth are delightful. Deitch Project’s booth is welcoming and  provides a microcosmic way to offer exciting new work successfully in an historical context.