Here’s a rather perversely democratic choice of just one piece each from a dozen categories: Art Basel’s gallery section; Art Unlimited (the main fair’s hall of 74 separate installations); the Liste, Volta and Solo Project and Photo alternative fairs; the Art Parcours works out and about in the city; other external installations; the commercial gallery spaces in Basel itself; private museums; public museums; and the surrounding towns. That’s perverse because there is of course exponentially more good art in some categories (there were 287 highly-rated galleries in Art Basel against 32 more modest ones in The Solo Project) – but there were good things in all categories. 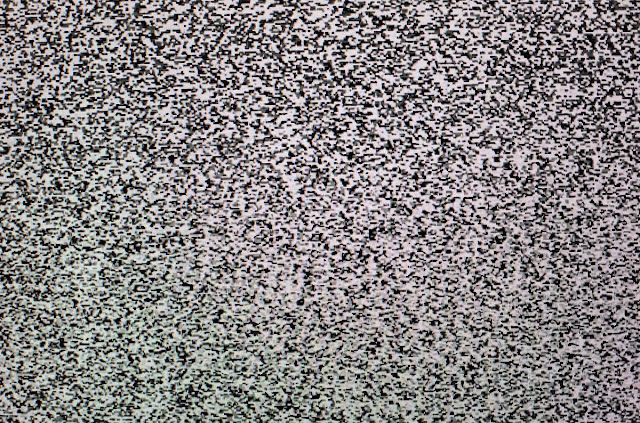 Wolfgang Tillmans: Sendeschluss / End of Broadcast VI, 2014
Inkjet print 171 x 252 cm  – Chantal Crousel, Paris
There were more spectacular pieces of course, I was struck by three photographic versions of time travel. 2000 Turner Prize winner Wolfgang Tillmans’ larger-than-life photograph of a TV screen had a peculiar allure. He took it in St Petersburg, while on a residency for Manifesta last year, and its intricate and subtly coloured patterns incorporate time travel of a sort. Russian TV is still issuing analogue signals, which Tillmans found were poorly tuned on his TV. He also found that his modern digital camera could capture those distorted signals with a clarity unavailable to a photographer at the peak of analogue broadcasting. Tillmans was sufficiently interested to ask for the room with the bad TV signal on future trips! Gillian Wearing showed a triple format self-portrait at Maureen Paley: as now, looking pretty good for fifty; as she expects to be at 70 through a computer projection, decidedly the worse for wear; and as she actually will be in 2035  – a space left blank for obvious reasons, but which Wearing undertakes to fill at the time.  Frankael had the neat conjunctions of Nicholas Nixon’s famous and ongoing series The Brown Sisters, showing his annual photographs of them in a set order from 1975-2014, with Idris Khan’s layering of them into one photograph of the first 20 years… 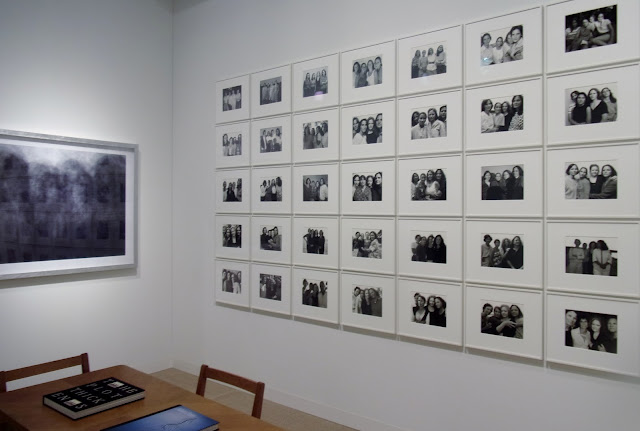 Idris Khan alongside Nicholas Nixon’s sequence of the Brown Sisters 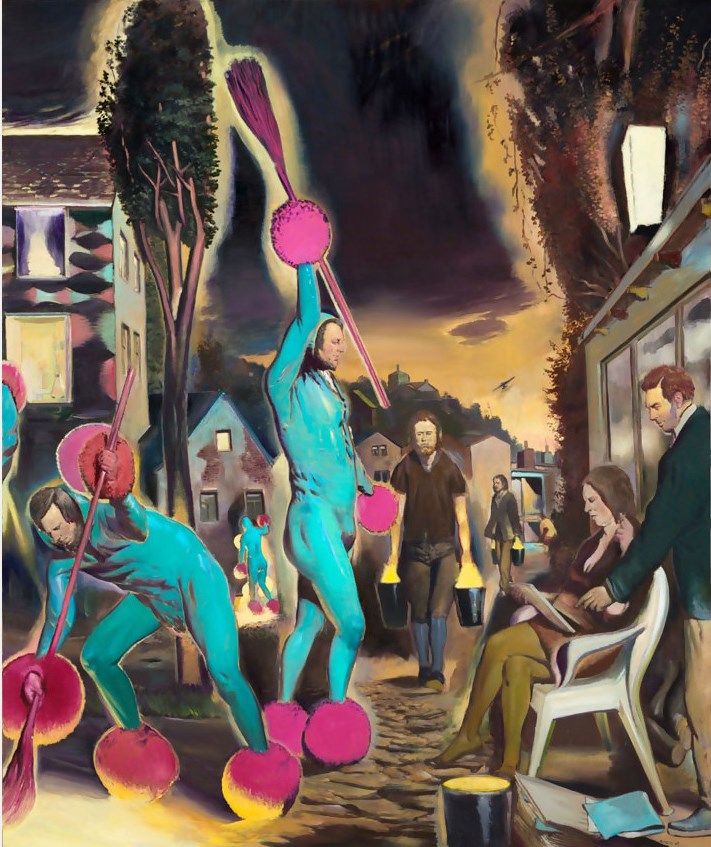 Oh alright then, I’m cheating quite a bit already but my favourite new painting in the main fair was this three metre high slice of  ‘Criminal Minds’ by Neo Rauch, with psychedelic colouring integrated with startling logic into his mysteriously dramatic intermingling of the old and new. 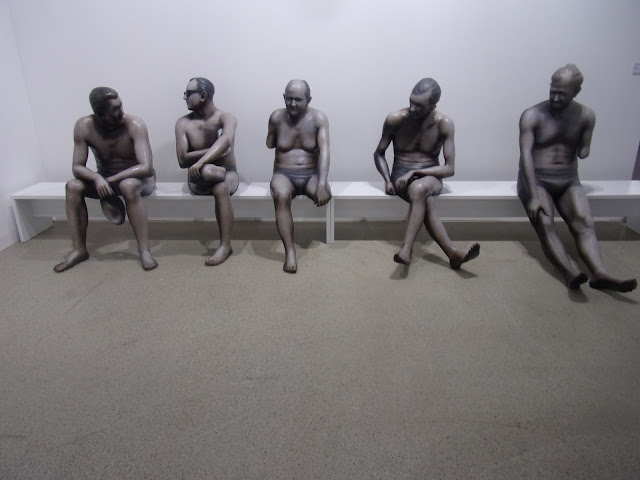 I’m tempted by a comparably-themed sculpture, too. Martin Honert makes 3D versions of photographs of personal significance to his own development, with enough attention to exactitude that his oeuvre develops slowly. His latest shows his father (centre) together with other veterans – albeit they were still young men – injured in World War 2. Once more, a modern technique facilitates access to the past through which we see our own times. 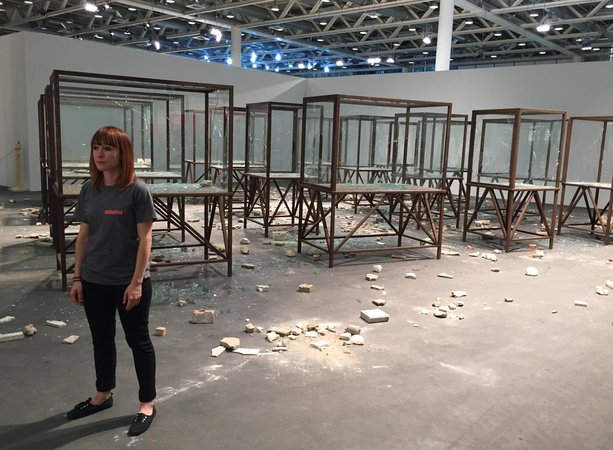 Kader Attia –  Spring, 2014
Art Unlimited was at its best this year, taking advantage of scale to make spectacle. One trend was towards presentation of manifold works in a room-like structure: 33 paintings by Hans Peter Feldmann, arranged to connected horizons, were a mere bagatelle; 110 large canvases by Emilio Vedova were stacked around variously; 196 somewhat smaller paintings by Jakub Julian Ziolkowski constituted Imagorea, his whole production in 2013-14 and enough to prove his unconscious has consistent weirdnesses; 200 collages by Tal R, memorialised his sources over the years; 500 studio nudes by Ryan McGinley (so many they colonised the ceiling). Then were accumulations: thousands of microphones, bicycles – and museum cabinets, smashed by the rocks still strewn around. Kader Attia’s Spring, 2014 seemed so well guarded that I asked what difference it would make anyway, were the work to get broken? Of course, the concern was the safety of the public rather than the work. Attia’s point was to reposition his established concern with breakage in a colonial context to the smashing and looting of museums in Egypt – in line with a pessimistic view of the likely long-term outcomes of the Arab Spring uprisings. Despite all whihc my favourite installations of new work were quiet studio-based rooms by Spencer Finch (recreating through shadowplay the light in his studio by night) and Roman Ondek (distributing the parts of a typewriter on found elements from his studio around a large room as an autobiographical readymade).
Liste 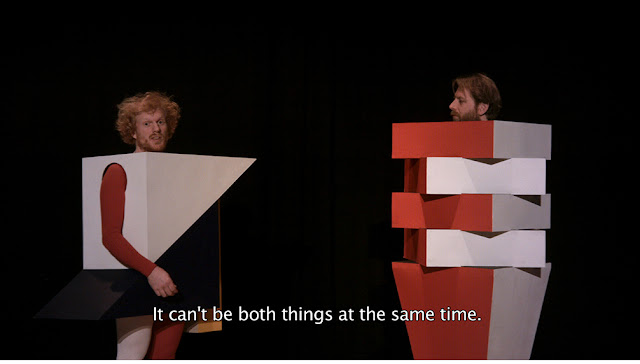 Feiko Beckers: A Conversation is a risk to lose your own opinion, 2015 – at Jeanine Hofland, Amsterdam

I could easily do with more effective humour, good writing and bite-sized narratives in video art – especially towards the end of a fair. Step forward Dutchman Feiko Beckers with a set of three four minute films in which he and a friend, dressed in  Malevich designs to signal idealism, discuss paradoxes such as:  how do I commend my old washing machine as worth giving to you without undermining my case to myself for spending significantly to replace it? Several plates, broken and fixed in tune with the changeability of his beliefs, provided more bite-sized flavours of his winning tone. Other Liste highlights included Alec O’s screens of broken glass patched up,  Michael Rey’s big oddly-shaped monochromes on plasticine over clay, and a complex film installation in which artist-partners Anna K.E. and Florian Meisenbergen produce an iterative double-selfie. 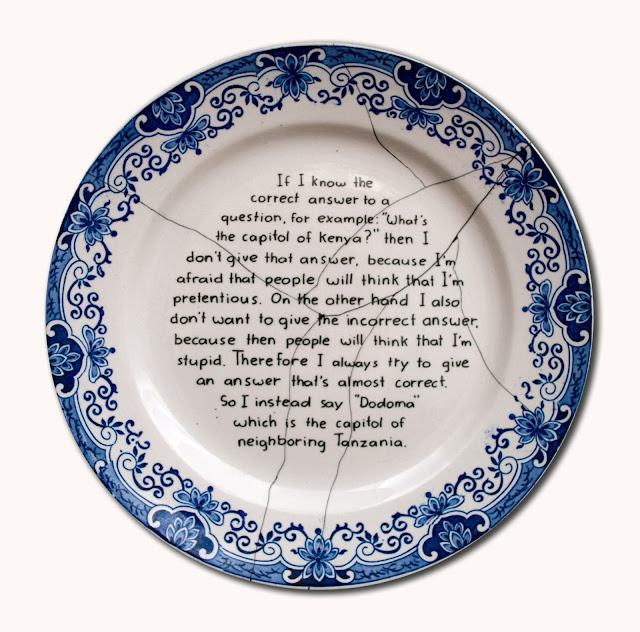 Feiko Beckers – from: Things I once believed in, that I then stopped believing in and that I now believe in again, 2015 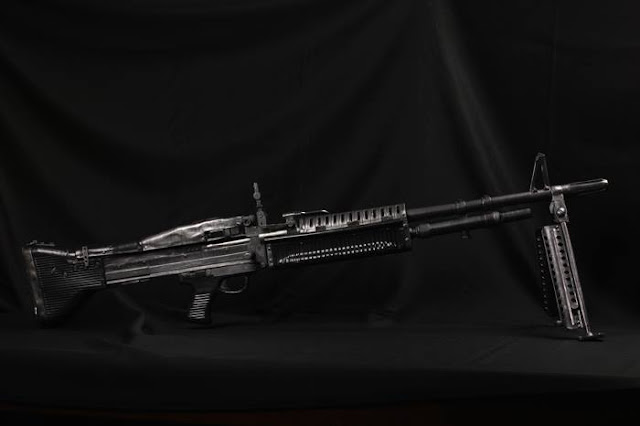 Here I liked plenty, such as Carina Linge’s photo tableaux, Susanne Kühn’s architectural presentation of paintings, Rose Eken’s kooky yet real ceramics and Andrea Canepa’s timeline of scenes of the future from sci-fi films. There was also Jeannette Ehlers  applying a charcoal-dipped bullwhip against white canvas for the performance Whip It Good! – the sound of which echoed louder than I’d expected through the Fair. Manabu Hasegawa makes innovative Trompe l’oeil use of frottage by creating 3D models, here including gold coins (for which he rubs the sides as well as front surface with a coloured pencil), a massive vault to hold them, and a wide range of knives and guns. Violence, greed and fragility: no surprise that  the Tokyo artist cites Buddhist sources, and specifically how what may seem permanent is ‘as dust before the wind’ (in the words of the 14th century epic ‘Tale of the Heike’). 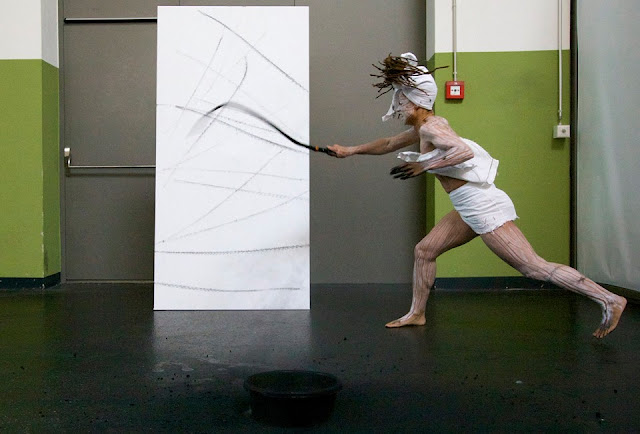 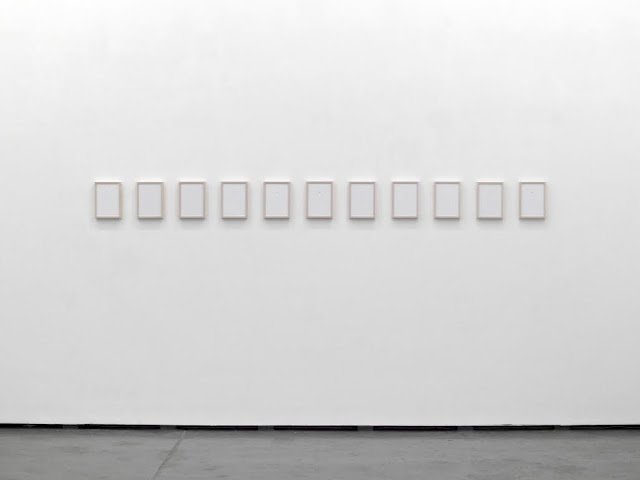 The Solo Project is always a pleasant viewing experience, having a generous layout, an excellent catalogue (as does Liste), good representation of a small number of artists, and no crowds. One impressively economical piece was Swiss artist Christoph Brünggel’s eleven part text work, which said ‘I still haven’t figured out how to deal with it inside’. The words were hard to make out, as the typing had overlapped them, suggesting that the inside not dealt with was literally the space inside the words. But once you knew that the quote was from a veteran of the Afghanistan War, the formal conceit read more darkly as a mind impacted. 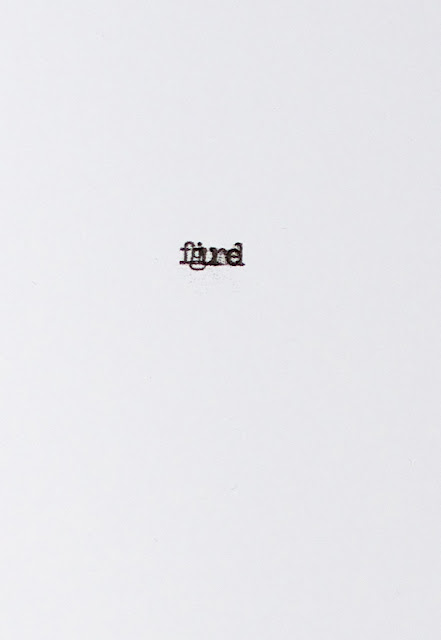 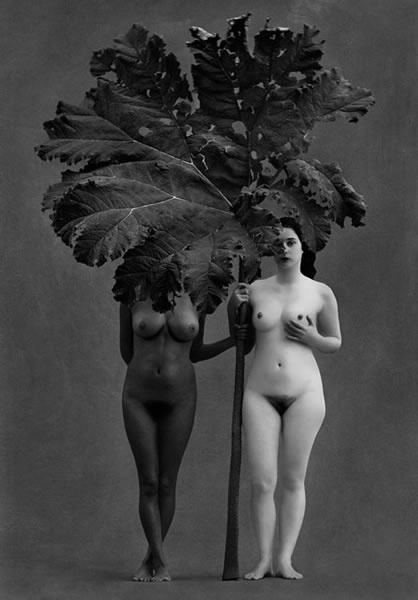 This new venture was small and somewhat scruffy, but included a wall of surreally tinged images by the Mexican Flor Garduño, who trained with Manuel Alvarez Bravo. The mythic Eden is in line with her own description of her nudes as ‘a search for the people who inhabit my dreams’. I like the echoes of Maillol’s sculpture, and how black and white replaces the expected male and female as the contrasted couple in paradise – or is it just that there would be no men there? I also liked Ishiuchi Miyako’s highly atmospheric and grainy images of US bases in Japan after they’d been abandoned (at Tokyo’s amanasalto). 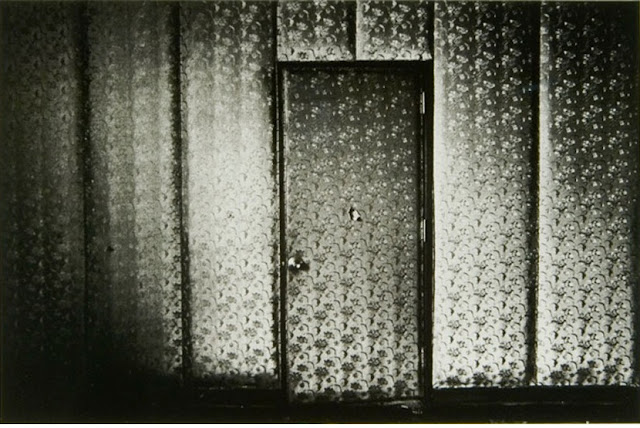 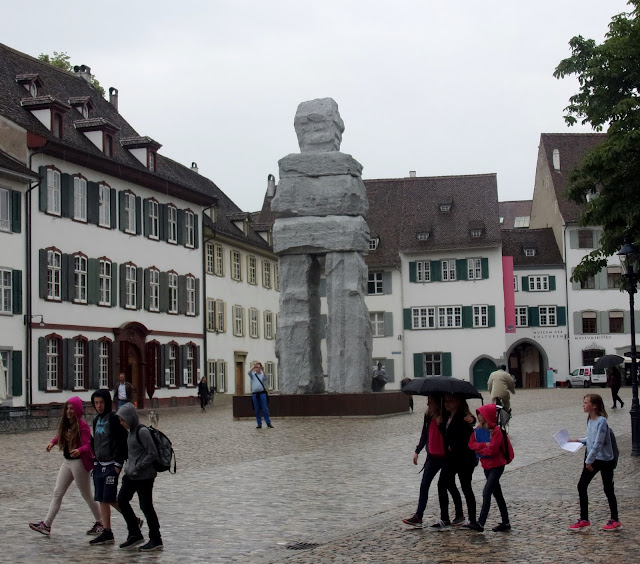 At 10 metres, the most imposing work in the xx stop Art Parcors route of art placed in the environs of the cathedral was Ugo Rondinone’s stone sculpture which used modern quarrying and carving techniques to mimic a prehistoric monument. The figure rose to the level of surrounding four storey buildings. Yet I suspect the project for which plans could be seen in Sadie Coles’ booth might trump even that (despite the best pink and blue preview efforts of the local schoolchildren in my photo above). The New York based Swiss artist intends to build a mountain of sorts from hyper-intensely coloured piles of boulders. The gallery presented three of these in front of comparably hued work by Jonathan Horowitz to provide the chroma-spectacle of the fair. 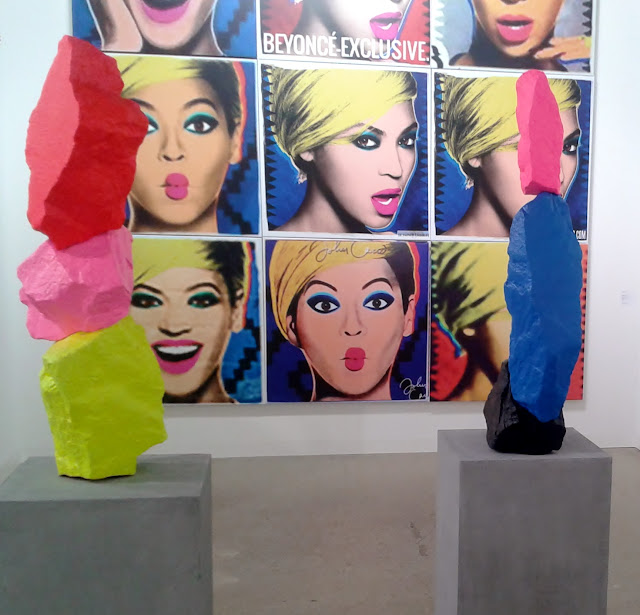 Also in the city

Berlin-based Turk Nevin  Aladağ was the discovery of the trip for me. I travelled via Stuttgart, where she was showing two captivating three screen film installations in which musical instruments were played by non-human processes, one urban and one set in the desert:  sand falling on drums, bells wafted by the tide, a violin bowed on each circuit of a roundabout.  The musical theme continued on the back wall of Basel’s Kunsthalle, where cannonball forms indicated the notes of Mozart’s Rondo alla Turka, the best-known example of Orientalism in classical music, whilst flagging the colonial basis of Orientalism and returning the military march to its origin as army signalling between the lines (of the army / stave). 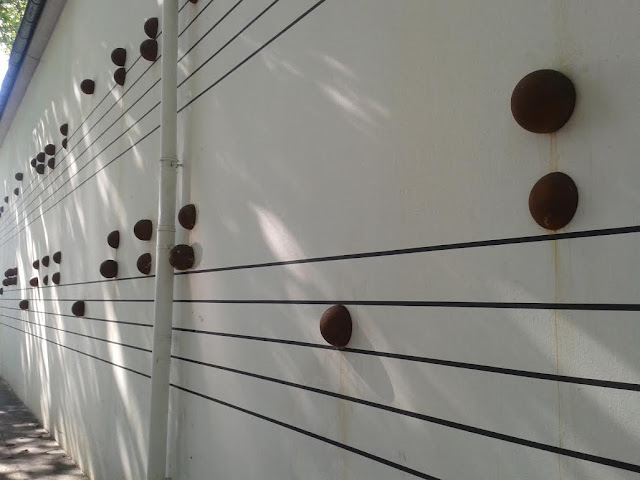 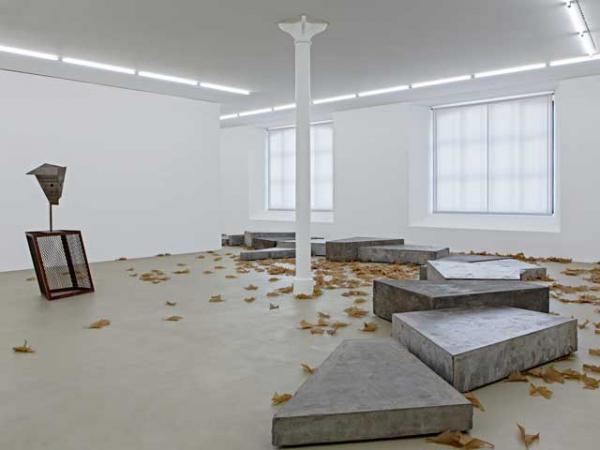 Martin Boyce: A River in the Trees, 2009
The Kunstmuseum, which covers something like 1500 – 2000 pretty comprehensively, is closed for restoration, so the focus shifted to the Museum für Gegenwartskunst (Museum of Contemporary Art), which rose to the challenge magnificently with a celestial choice of Frank Stella paintings; a curiously homonymic pairing with a floor each for Martin Boyce and Joseph Beuys; and a selection from the displaced collection. It’s also worth mentioning the decidedly original and fantastically installed Haroon Mirza exhibition at the Tinguely Museum, which saw Mirza play off and collaborate with various other artists: Tinguely, of course, but also for example animating a Calder, using a Kapoor mirror  as a reverse readymade, deriving a sound installation from Channa Horwitz’s Sonakinatography paintings and dedicating  three rooms to acoustics and light in response to a previous Eileen Gray show. 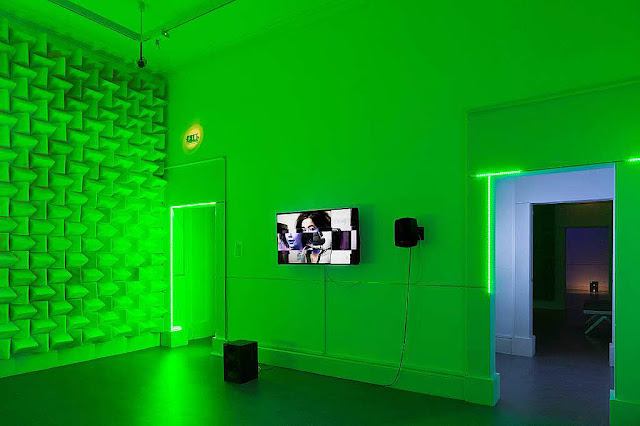 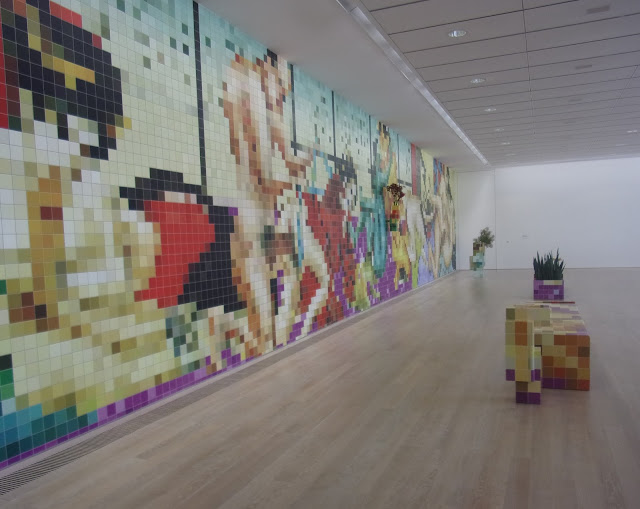 The Foundation Beyeler can be relied on for heavy-hitting exhibitions, and this year there were two: Paul Gaugin and Marlene Dumas.  Less familiar, especially if you’d seen the Dumas at Tate Modern, was Tobias Rehberger’s takeover of the large basement space.  It was so spectacular it would have fitted right in to the Schaulager’s typically impressive retrospective of installations from Barney, Fischli and Weiss, Kabakov et al. The German artist has made a 26m-wide mural, using monochrome squares of wallpaper as pixel-like coloured tiles.  Vases (with plants) and benches sit in front with matched patterns such that they disappear if seen from the right angle, whereas the tiles come into focus, given distance,  as sex acts taken from Japanese manga. Thus disguise operates in two directions, and fine art is derived from what might be termed a combination of décor and the undecorous. In the fair, Berlin’s neugerriemschneider had a less subtle version in which sex toys replaced the plants… 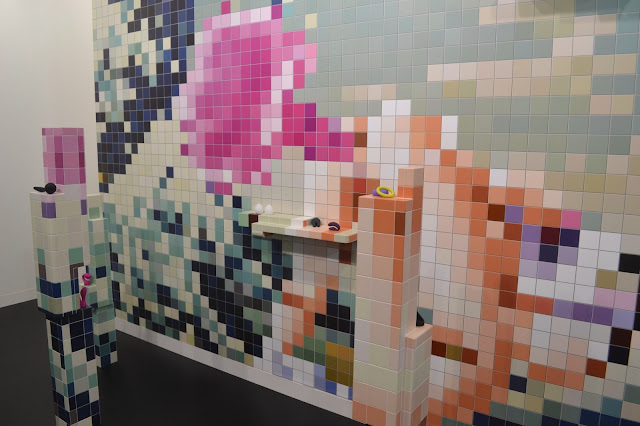 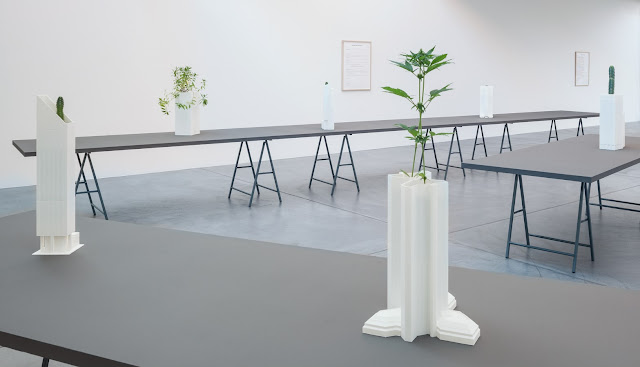 Von Bartha has my favourite commercial space in Basel: it takes up most of a former garage, but there are still operative petrol pumps outside.  Inside, the Danish collective Superflex (perhaps you’ve seen their flooded McDonalds) brought their witty brand of anti-capitalist subversion to bear.  They included contracts requiring corrupt practices to be followed;   memorials to bankrupt banks; and plant pots in the form of the world’s top investment bank HQs in which psychotropic plants were growing, so suggesting that high finance dealings might be comparably addictive, euphoric and irrational. There was also a ten day film simulation of how an architectural ideal of modernism would deteriorate if left to do so over thousands of years, originally shown on a 40 m2 screen in front of its subject, the Stora Enso building in Helsinki. 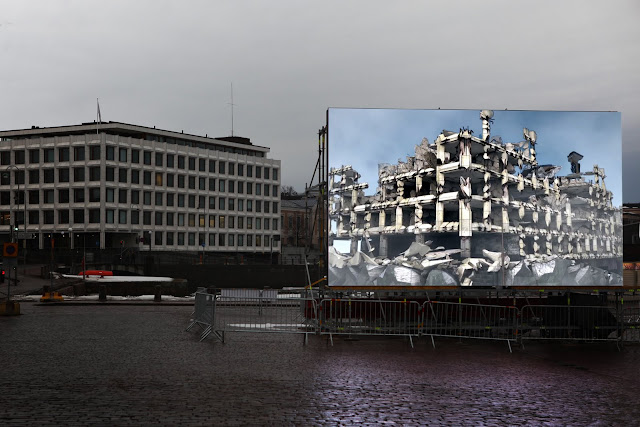 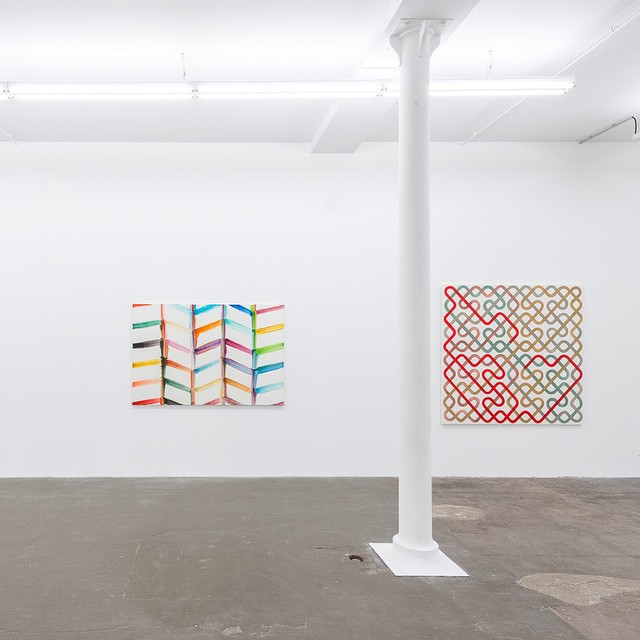 Saint-Louis, though in France, is so close to Basel that I usually stay there, Switzerland being rather expensive.  Ironically, I was too late to book this year and so was based in Germany during the first must-see show I can recall at the Fondation Fernet-Branca: a 35 painting career survey from 1976 onward of the hyper-inventive abstract process painter Bernard Frize. That was interspersed by way of  intensely-pigmented monochrome breathers with the object paintings of Günter Umberg, and there was also a spectacular retrospective of our own Queen of Dead Flies, Claire Morgan, on the floor above. 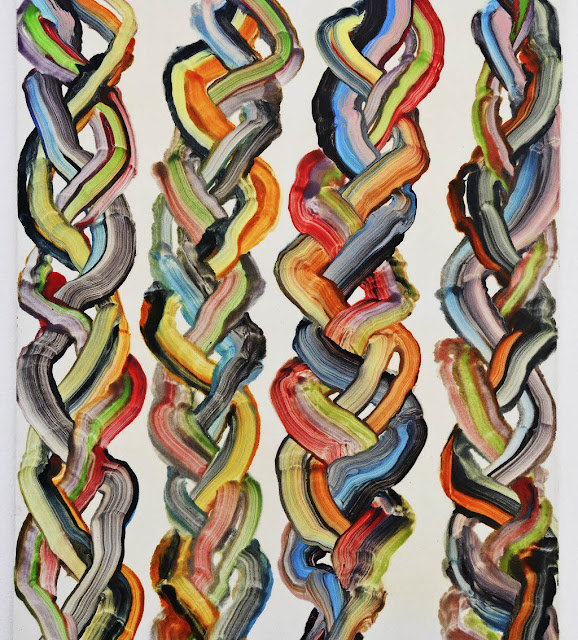