‘Aftermath: Art in the Wake of World War One’ at Tate Britain and ‘Magic Realism: Art in Weimar Germany 1919 – 33’ at Tate Modern are linked exhibitions. Both feature many of the same German artists, while Aftermath also includes British and French artists from the same period.

In a move suggesting that mainstream curating has now accepted the validity of a continuing but fractious relationship between art and faith as a strand within modernism, both feature artists who depicted biblical stories in contemporary settings to reflect on the consequences of war (including Winifred Knights, Stanley Spencer and Albert Birkle). ‘Magic Realism’ has a room exploring Faith (including Birkle and Herbert Gurschner), while ‘Aftermath’ includes Georges Rouault’s series Miserere et Guerre (Mercy and War), adapting biblical imagery to reflect on contemporary experience.

In Germany one point of inspiration for reflecting on the consequences of war by means of biblical analogies may have been provided by the exhibition from 1918 – 1919, for reasons of safety, of Grünewald’s Isenheim Altarpiece in the Pinakothek in Munich. The critic Wilhelm Hausenstein suggested that after ‘four years of war, the masses gathered together for the first time before the Spirit of a German artist – probably the greatest we have ever had – to share their innermost common predicament.’ 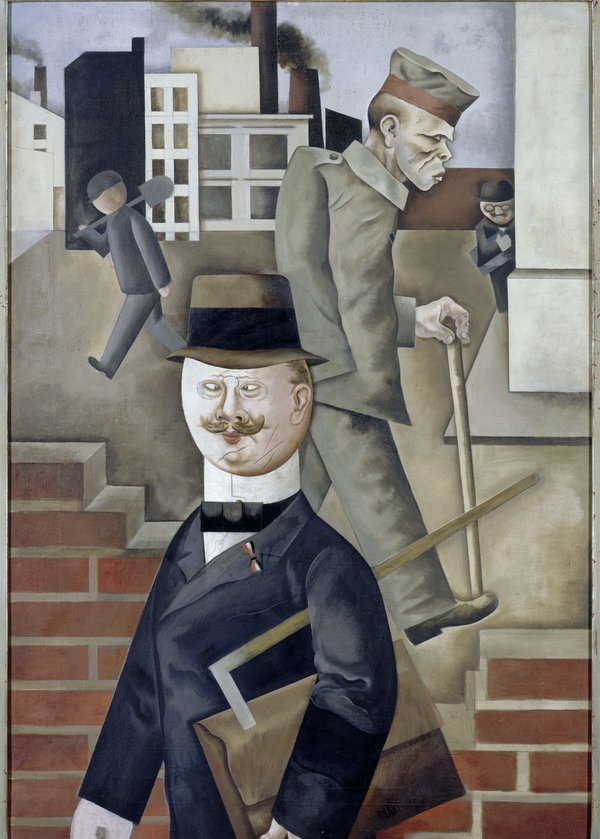 In 1928 Otto Dix created Der Kreig (War Triptych) about which he wrote that, ‘People had begun to forget the terrible suffering the war had brought to them. From this situation arose the triptych … I did not want to cause fear and panic, but impart knowledge about the awfulness of war and thus awaken people’s powers of resistance.’

Ann Murray has explained how: ‘Dix’s use of the triptych format, the inclusion of entombed soldiers in a predella, and the rich, grimly luxuriant transparent glazes recall the tragic splendour of Grünewald’s enduring image of agony. A decapitated head crowned with barbed wire (bottom left foreground, central panel), almost invisible in reproductions but almost rolling at the viewer’s feet when one stands before the painting, clearly alludes to Christ’s crown of thorns and betrays a deliberate attempt to associate the soldier’s suffering with Christian sacrifice, sealing this image’s societal function: that of defending and justifying the recollections of German veterans, and acknowledging their suffering.’[i]

Martin Gale writes that ‘Dix’s detailed depiction of squalor and the melancholy of Barlach’s wingless angel … were all seen by those on the right as insults to the memory of those who had died.’[ii] Kenan Malik has described how Ernst Barlach found that his experience of the Western Front stripped him of his jingoism. Much of his subsequent work explored the sorrow and suffering that he saw as the human condition:

‘In 1927, he created for the cathedral in Güstrow, a small town north of Berlin, a war memorial called Der Schwebende (“the Floating One”). The sculpture featured a figure with a haunted, grief-stricken face cast in bronze and suspended from the ceiling, as if hovering, angel-like, over the fields of Flanders. Ethereal and transcendent, the memorial is far from the monumental structures that usually commemorate the fallen, and yet captures so starkly the loneliness and terror of war.’[iii] 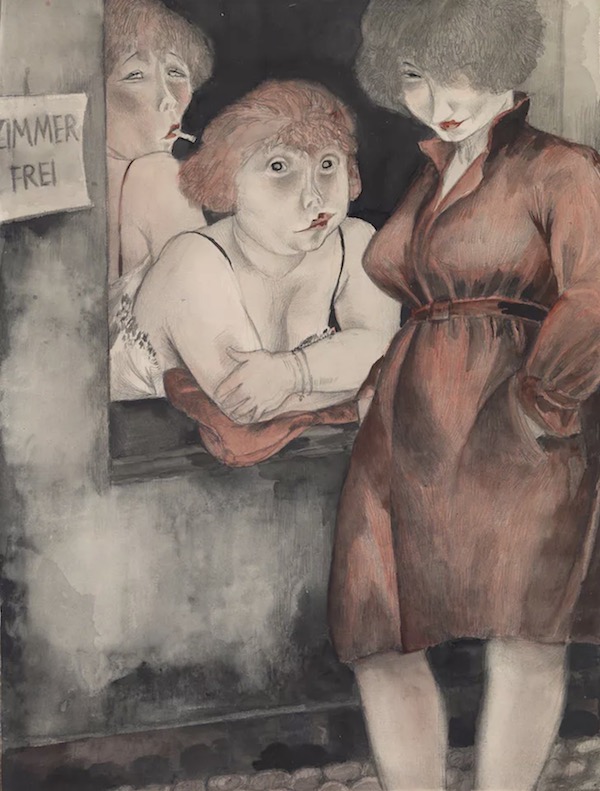 The work of Dix and Barlach is well known, so the major revelation of these exhibitions are those artists like Albert Birkle whose work is lesser known. Simon Martin notes that from 1924 onwards, the Berlin-based Birkle ‘created modern religious paintings with a strong social-critical aspect, such as Cross shouldering (Friedrichstrasse) 1924, in which a Christ-like figure is depicted in the crowded streets of contemporary Berlin, disregarded by those around him, including two policemen on horseback – a scene that pays homage to Northern Renaissance treatments of Christ carrying the cross.’[iv]

Birkle’s subjects were mystic landscapes, Berlin scenes, character portraits (such as The Acrobat Schultz V 1921 in ‘Magic Realism’) and his religious scenes. In his style of portrait painting he was often compared to Otto Dix and George Grosz, but, in his socio-critical religious work, he is close in approach to Georges Rouault. In 1927, Birkle had his first successful solo show in Berlin. That same year, he turned down a professorship at the Koenigsberg Acadamy of Arts in order to continue to work independently as an artist and to dedicate himself to the field of church decoration, particularly frescos, including work at Gaislingern and Kattowitz (Katowice).

As National Socialism came to power, Birkle moved to Salzburg, Austria, in 1932. He represented Germany at the Venice Biennale in 1936 but his art was declared ‘degenerate’ in 1937 and he was placed under a painting ban.

Herbert Gurschner, by contrast, was an Austrian by birth, who, through marriage, became more active in Britain from the 1930s onwards. Gurschner was a painter of portraits, genre and religious subjects, who also designed for the theatre and was a maker of woodcuts. Triumph of Death 1927, Lazarus (The Workers) 1928 and The Annunciation 1929–30 are included within ‘Magic Realism’ and show Gurschner in dialogue with Italian Renaissance tradition. When The Annunciation was shown in London in 1931, J.B. Mason, the then director of the Tate Gallery claimed: ‘It can hold its own with distinction even among those early paintings when the subject had a spiritual significance for painters, profounder than any it can have for the artists of today.’

As these exhibitions and the work included in them by Barlach, Birkle, Dix, Gill, Gurschner, Jones, Knights and Spencer show, while the spiritual significance artists found in these biblical subjects diverged greatly from the significance such images held for artists of the Italian or German Renaissance, nevertheless in a time of turmoil religious ideas and iconography continued to hold significance for artists in making sense of their world.