I’ve always liked the Other Art Fair, on in London from now till April 2nd. But I’ve never quite known what to say about it. Basically, it’s a show devoted to non-joiners, artists who’d prefer to represent themselves rather than become the prisoners of the deal. Plus, of course, emerging artists, who haven’t yet managed to attract a dealer.

Typically, there’s no particular stylistic direction. You’ll find a multitude of different tendencies here. In fact, what’s striking about the Other Art Fair is how accurately it now reflects the visual arts situation in general. There’s a good deal of would-be novelty, but nothing that’s provable as new in any radical sense of the term.

However, the great attraction is that if you find something here that you really want to put on your wall, it’s going to be a lot cheaper than if you bought it from an established dealer.

Wandering about through a maze of different stylistic options, I found my attention was being consistently, and in a way perversely, being drawn – ‘drawn’ being the right word in more senses than just one –  to works that didn’t assail me with blasts of colour, but which were strictly in black-and-white. 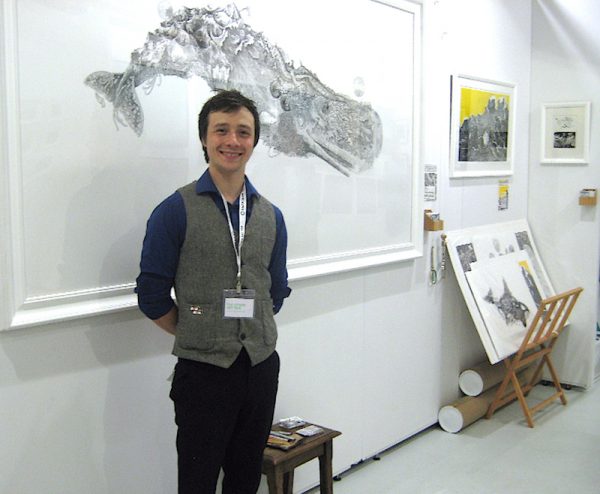 Olivier Marc Thomas Leger At The Other Art Fair

I’ll cite two artists here whose work particularly attracted me. One was Olivier Marc Thomas Leger. On his web-site Leger sums up what he does as follows: ‘The drawings are made using fine liner pens (0.03 – 0.8mm). The animals are imagined as living planets or landmasses, with their own landscapes and ecosystems.’ –

In fact, the designs are so fine and intricate, though often quite large in scale, that on his stand he offers you magnifying glasses with which to look at them.

The other artist who caught my eye is called Dan Hillier . Here the images are more theatrical, often in a literal sense, offering figures in intricate headdresses and costumes.

In both cases, the artists seemed to take me back to the ‘decadent’ style of the end of the 19th century. Aubrey Beardsley and all that. Who was it that said: “The more things change, the more they remain the same.”?