The appearance of a new Banksy in London can create quite a media frenzy. The last works to hit the streets in the capital came at the end of Summer 2017, during the highly anticipated Basquiat retrospective exhibition.

This manifestation prompted the Senior Art Critic Edward Lucie-Smith to declare; “I loved his piece that appeared recently on the outside of the Barbican Centre, commenting on the Basquiat exhibition within. It did a lot of things very economically. Some of the images were in Basquiat’s own style – hip-hop pseudo-African. But the policeman and the policewoman molesting the central Basquiat figure were derived from press photographs of similar incidents in real life and were quite different in style. And the figure lying above, about to crown Basquiat as a martyr was of course straight from traditional religious art. No words were needed. The image said it all.” 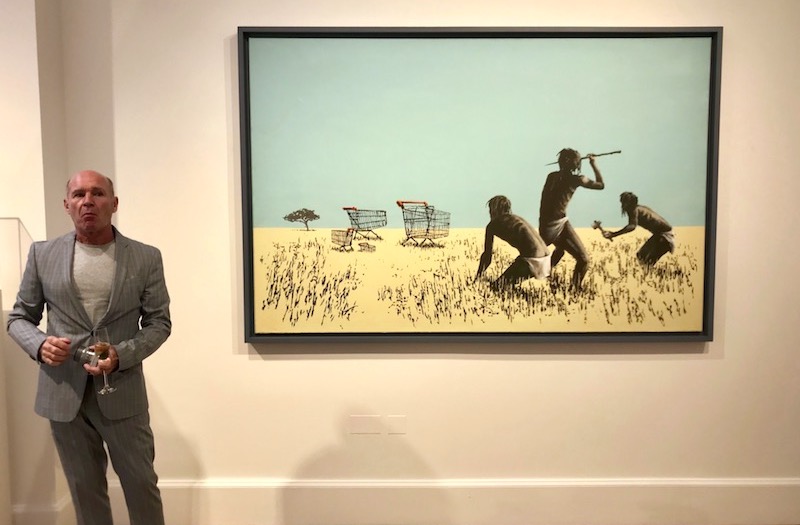 ‘Banksy: Greatest Hits: 2002-2008’ exhibition at London’s Lazinc gallery, until 12 July, is the first comprehensive survey of the elusive Street Artist’s studio works in a Mayfair gallery. It is unsanctioned by the artist and made up entirely of secondary market work, much of it created when Steve Lazarides managed the artist. I attended the PPV on Monday night and was startled by the contrast between the slick new gallery (kudos guys) and the political content of the work displayed. If presentation and context is everything in the art world, I would be curious to know what Banksy thought of this exhibition, as the Champagne flowed and the nibblies served on slate trays moved from room to room. Perhaps he was loving it? Maybe he was there disguised as a waiter. In any event, the underlying message suggests that Banksy has joined the ranks of Warhol, Basquiat and Koons. Nothing downtown about this.

Edward Lucie-Smith added, “Turning him into posh objects for self-conscious celebrities to hang over the sofa doesn’t work for me. He stops being subversive and becomes a manufacturer of rich people’s trophies.”

The Lazinc show hasn’t even opened to the public but already the sale of three paintings priced between £500,000 and £1.5m has been buzzing around the streets of Mayfair.

When I published the preview for this exhibition I received a curious email from someone saying they were from Pest Control, a handling service acting on behalf of the artist BANKSY.

“This is absolutely Bullshit! The guy (Steve Lazarides) has absolutely nothing to do with Banksy, not for years and he knows it. An absolute joke, you’ve been had!”

Pest Control states on their website that they “answer enquiries and determine whether Banksy was responsible for making a certain piece of artwork and issue paperwork if this is the case. (All of the works in this exhibition are genuine) This process does not make a profit and has been set up to prevent innocent people from becoming victims of fraud.”

Pest Control is now the sole point of sale for new work by Banksy, of which there is currently nothing/something available. Banksy is not represented by any other gallery or institution. 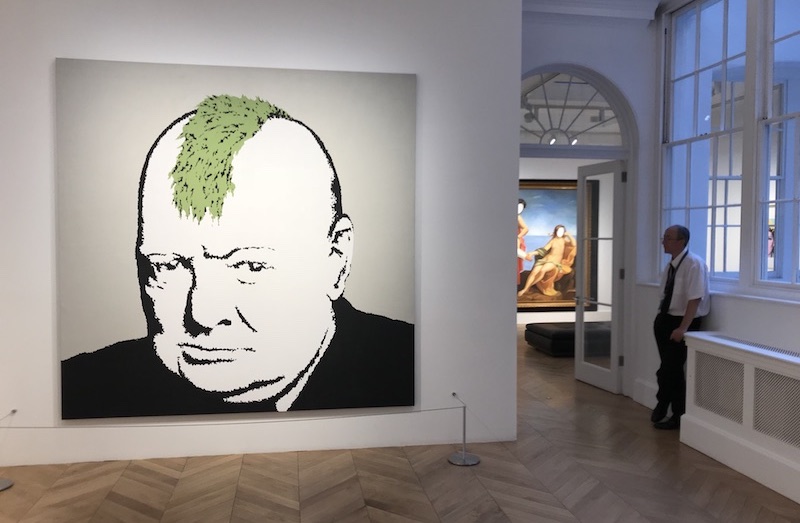 Badmouthing aside, Banksy at Lazinc is a very good show well worth going into town to see. I’m not sure how much of it is for sale as many paintings have been loaned to the gallery for the exhibition. As mentioned they are all studio works not hacked from walls “Street Murals” like some of the shows I’ve previously attended. Some of the subjects are familiar like “Kissing Cops” which first appeared on the front of a pub in Brighton and soon became a tourist attraction until it was separated from the building and sold. This version is on canvas and framed. All of the work speaks for itself.

Edward Lucie-Smith added, “In fact, Banksy often strikes me as a very gifted 19th-century caricaturist – Daumier re-jigged for the present. He’s particularly good at manipulating stylistic clashes. “Also just think how comic it is that the R.A., desperate to certify its own street cred in the current Grayson Perry curated monster show, first turned down an anonymous submission, then had to beg him, pretty-please, to come back in.”

Art has always been treated as a commodity. The ancient Egyptians adorned their tombs with splendour as did the Greeks and Romans. The Church and Monarchy commissioned the great works that fill our museums and galleries today. Banksy has now reached commodity status. Just look at his print prices, anyway, he deserves it. The work is instantly recognisable in style and form. It has been part of the visual art zeitgeist since the 1990s. The other thing it has going for it is humour and political depth. A winning combination.

The comparison of a work like Picasso’s Guernica to a Banksy is a valid one. Guernica is regarded by many art critics as one of the most moving and powerful anti-war paintings in history. Picasso revelled in his celebrity, held onto his Marxist beliefs while living it up in a villa in the South of France. Banksy, on the other hand, has chosen anonymity perhaps a first in our overinflated celebrity-driven society. I’m quite sure he isn’t still living in a squat, but who can say how he lives. 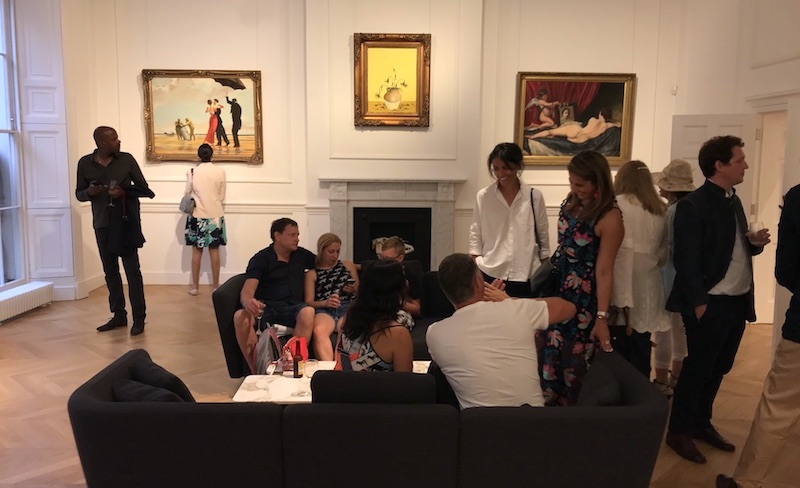 Banksy and Basquiat have achieved record prices both privately and at auction, yet there seems to be a resistance from international museums and institutions, as few have works by these artists in their permanent collections. I would like to remind Tate that ‘The Three Dancers’, 1925 by Pablo Picasso would never have been bought by the gallery if it wasn’t for the foresight of Sir Roland Penrose in 1965. He fought tooth and nail to get the board to agree to its purchase. Sometimes museums can’t see the wood for the trees when it comes to prioritising who is important enough to be included in their collections.

On a final note, there is currently a Banksy show on in Toronto also curated by Steve Lazarides which costs $39 per person to see. It is being touted as the largest Banksy Show ever with over 80 works. Another is running concurrently in Holland (12.50 euro) with over 50 works on display. The Lazinc show is Free and a gift to all.