The new Jean-Michel Basquiat show at the Barbican titled Basquiat: Boom For Real comes with a thumping big hardback catalogue published by Prestel. A luxurious tome of the kind you’d use to try to brain your rich auntie if you happened to be feeling a bit short of cash. The word on the street right now concerning the late Jean-Michel is all about money.  Recently a painting of his fetched $110 million at auction, a price that far exceeds that given by a work for any other African American artist. If you can’t rise to that, but still feel a need for retail therapy, you can console yourself by buying a Basquiat t-shirt (choice of two), or a Basquiat shopping bag from the exhibition shop, where’s there’s also a wide choice of other glossy publications concerning the artist. There’s no doubt that the event brings you into the presence of a contemporary culture hero.

As such, it is in fact extremely well done, and will, more than likely, give the Jasper Johns show just opened at The Royal Academy a run for its money – yes, that word ‘money’ once again. In the case of each artist, the event brings you face to face with the mysterious operations of capitalism within the art world. 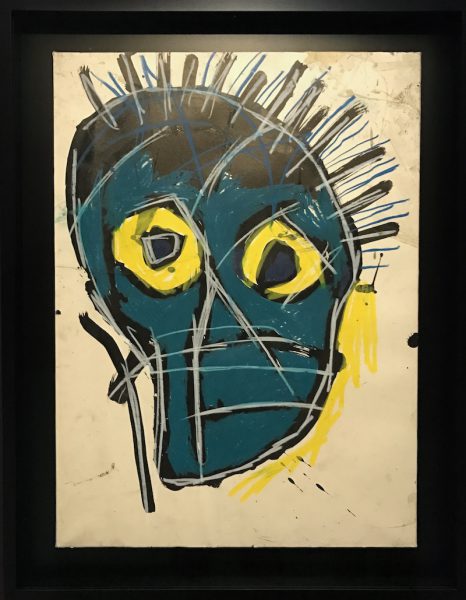 If you want a sly comment on that, you’ll find one close at hand, in the form of a new graffiti painting by Banksy, which has appeared on the wall in a street leading up to the Barbican Centre. It shows an Africanising figure, unmistakeably in Basquiat’s style, being accosted by two police officers, one of them patting him down, the other apparently writing up a summons. The composition encapsulates the current reputation of the artist, which is that of a rebel adored and certified by the cultural establishment, while still retaining authenticity as an outsider. Of course, it helps that the rebel concerned is now safely dead.

Basquiat originally made an impact on the New York art scene in the late 1970s, as one of a duo of young graffiti artists who used the tag SAMO©. The grand catalogue mentioned here is too refined to point out the double signification of this. On the one hand, ‘Samo’ is a contraction of the phrase ‘Same Old Shit’ – an expression of discontent with the state of things as they then were in the city. And on the other, it is a contraction of ‘Sambo’ – a derogatory term for an African American.

Street graffiti was first starting to make an impact in New York, as a kind of public art with no links to officialdom, but completely in tune with its time. Another pioneer of the graffiti movement was Keith Haring, with whom Basquiat on occasion collaborated.

The innovation, in Basquiat’s case, was that his graffiti moved off the street, and into the galleries that sold contemporary art. This was possible thanks to the shrewd responses of a number of innovative dealers, working in a market ever hungry for novelty and the next big thing. It is I think notable, though again and this is little noted in the catalogue, that many of these were not American. Basquiat had, during his short career, a remarkable number of shows with leading European dealers.

In a way, in doing so they offered a negative judgement on the then state of American culture. The Pop movement, dominant in the 1960s, was now clearly in trouble. Something else was needed. This acknowledgement was also made, in a different form, by Andy Warhol, one of the big stars of Pop, when he too began to collaborate with Basquiat.

As the poster-child of this shift in taste, Basquiat was offered a range of opportunities. As the Barbican exhibition comprehensively demonstrates, he became the hero in his own play. One feature of the show its large number of self-portraits. But after that what? Where was the hero to go? There’s no doubting the graphic energy of the images, but it’s hard to guess how Basquiat might have developed had he survived. Banksy doesn’t develop from Basquiat. In his new mural, he seems instead to offer a detached summing up. 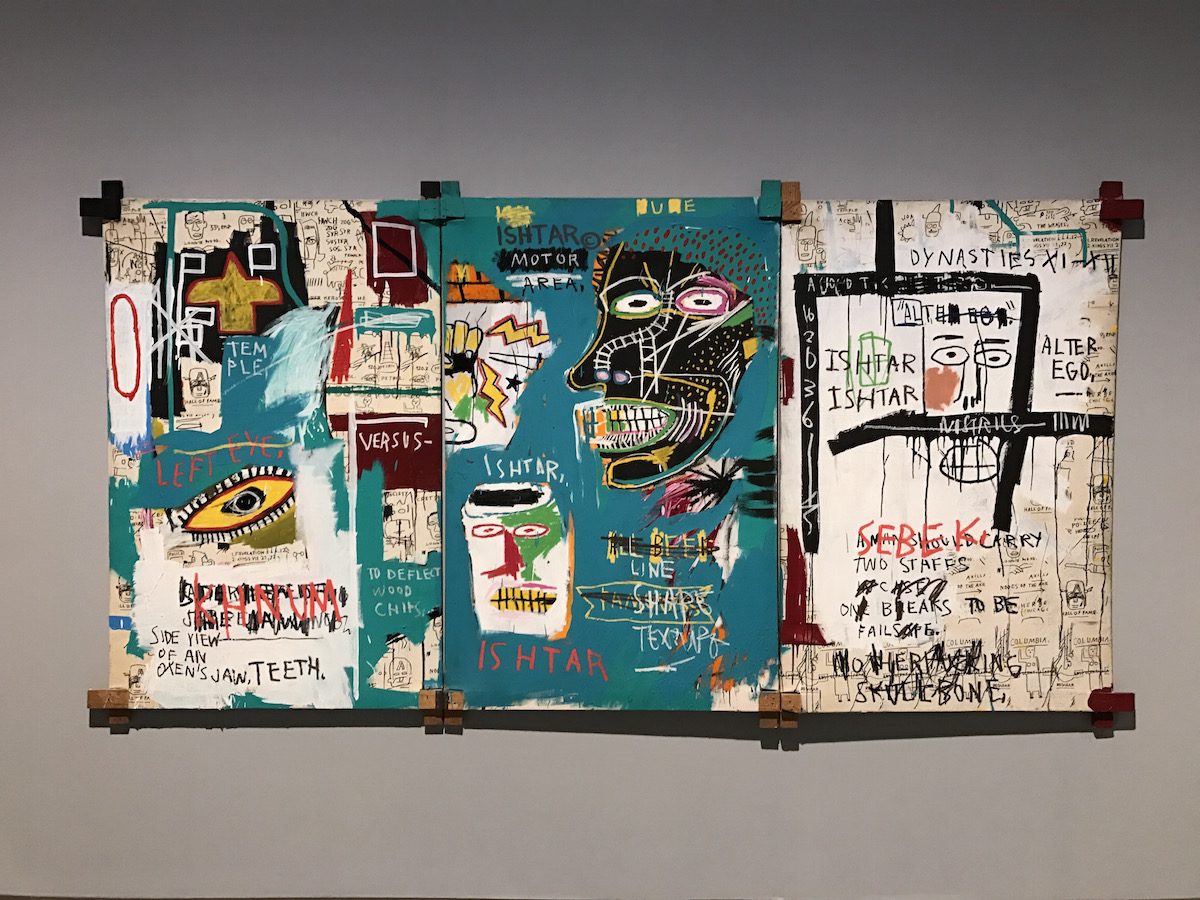 *Jean-Michel Basquiat, the pioneering prodigy of the 1980s downtown New York art scene. This unprecedented exhibition brings together an outstanding selection of more than 100 works from international museums and private collections. Engage in the explosive creativity of Basquiat who worked with Andy Warhol, Keith Haring and Blondie, among others. Featuring rare film, photography and archive material, the show captures the spirit of this self-taught artist, poet, DJ and musician whose influence, since his death at 27 in 1988, has been enormous.