Paul Carey-Kent has just spent 30 hours in Bilbao, mostly focused on the opening of Abstract Expressionism at the Guggenheim Museum on the evening of 2 Feb, but the city has plenty else of interest, some good, some not so good…
Most Loved 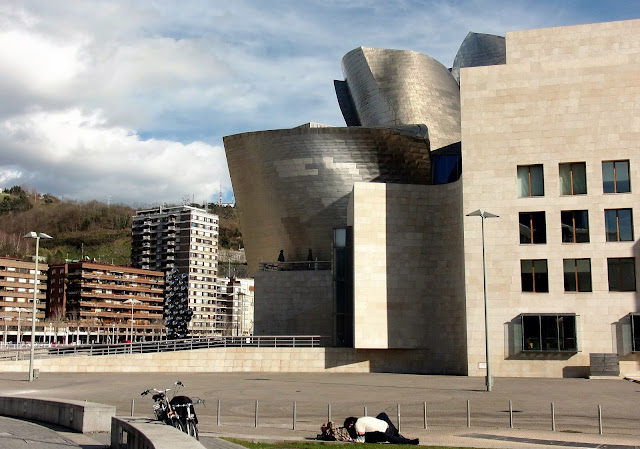 Cloaked in titanium to appropriately fish-scale effect, the Guggenheim Museum opened in 1997 with 11,000 m2 of exhibition space distributed over nineteen galleries. Everyone adores it – especially, perhaps, the 5,000-odd locals whose jobs result indirectly from its effect as a beacon for the economics of cultural rejuvenation.  When I downloaded my various photos of Gehry’s masterpiece, this one turned out include a cyclist couple who’d evidently taken the love on a stage from the architecture… 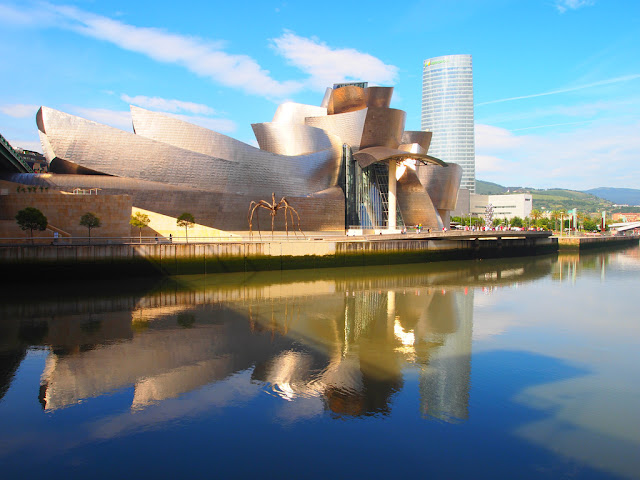 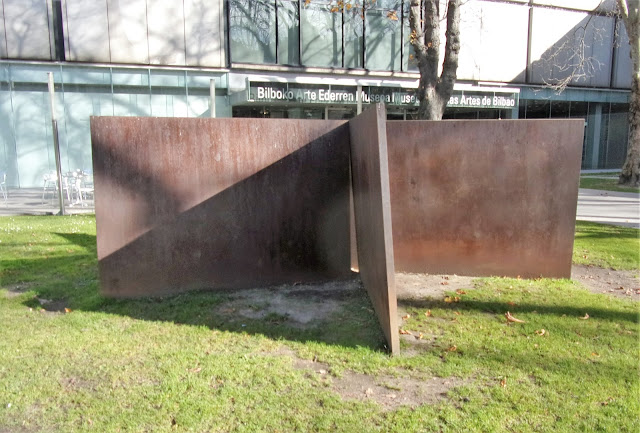 Richard Serra says it takes an hour to experience fully the walk around and within his seven sculpture installation The Matter of Time (1994–2005) at the Guggenheim. A few seconds is enough to stroll around the Museum of Fine Arts’ Five Plates Counterclockwise Pentagon, 1987, which I imagine seemed quite a big deal itself when installed. 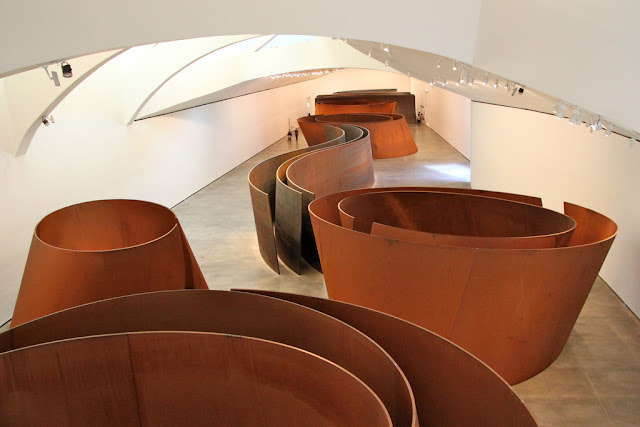 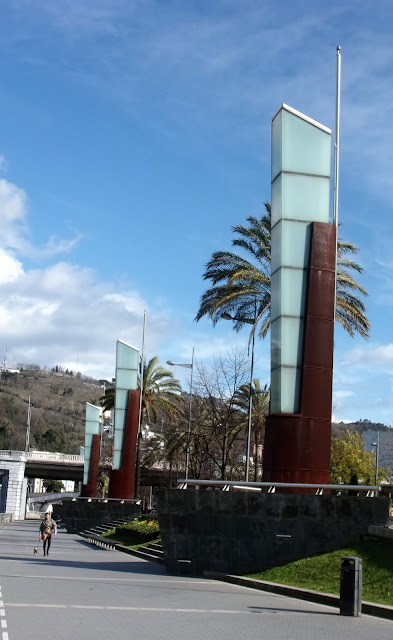 All along the estuarine banks of the  Nervion River are tall structures founded on corten steel. Are they a response to Serra? No, they are surprisingly substantial lighting for the local fishing boats, and have been there far longer than the American heavy sculptor (who’s father, incidentally, was Spanish). Note the small dog, we’ll come back to that.
Biggest Show 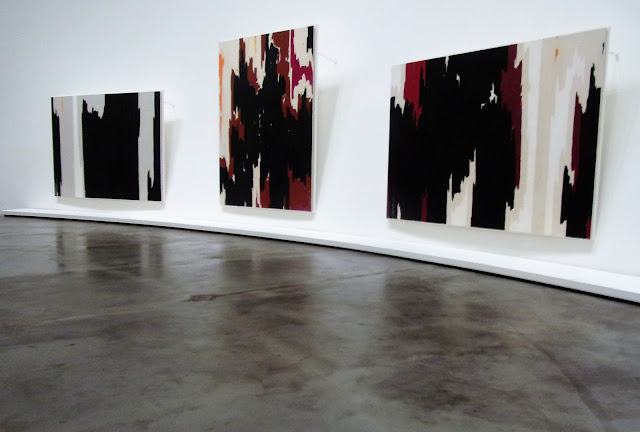 In London, the first major European survey of Abstract Expressionism since 1959 was a triumph of loan brokering diluted by under-representation of women and poor presentation. At the Guggenheim, it looked plain great, even if Mitchell and Frankenthaler got no extra inclusions. Perhaps Clyfford Still (see Spanish sample above) still had the biggest total impact: it was Peggy Guggenheim who first showed him in New York, now here he was in force in her Uncle Solomon’s place. And if, Still aside, I was to choose one painting, how about Andrus, 1961, Franz Kline’s late turn to colour just before his untimely death at 51 prevented him exploring its electric possibilities more fully. 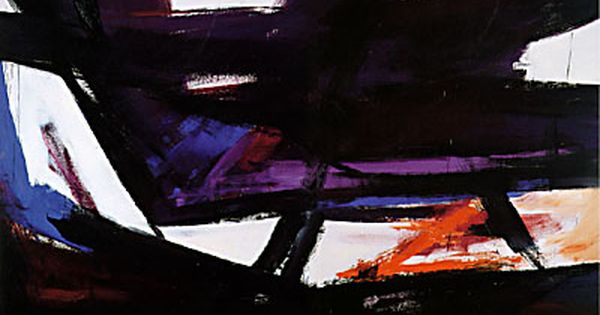 Most Traumatic Echo of the City 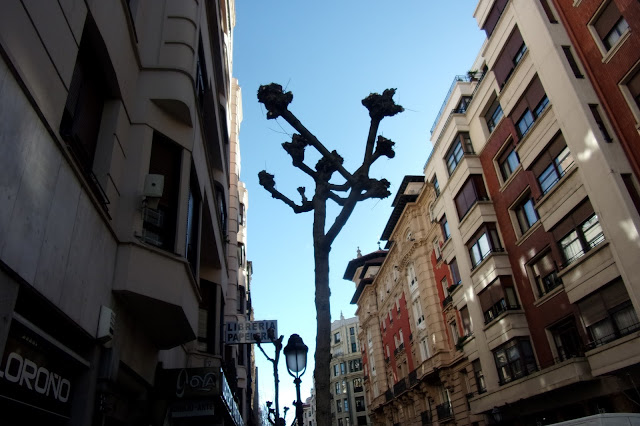 The trees in Bilbao tend so severely towards the minimalist, at least in February, that most are reduced to humanoid stick-ciphers, many to little more than an apparent V-sign to passers-by.  One of the Guggenheim’s excellent subsidiary shows was of Albert Oehlen: it included several paintings using his long-running tree motif. Untitled,2013, exploits Oelhen’s accidental discovery that he liked painting on aluminium. The series uses magenta, he says, as ‘a hysterical colour, somehow – to me they look like psychopathic human trees’. 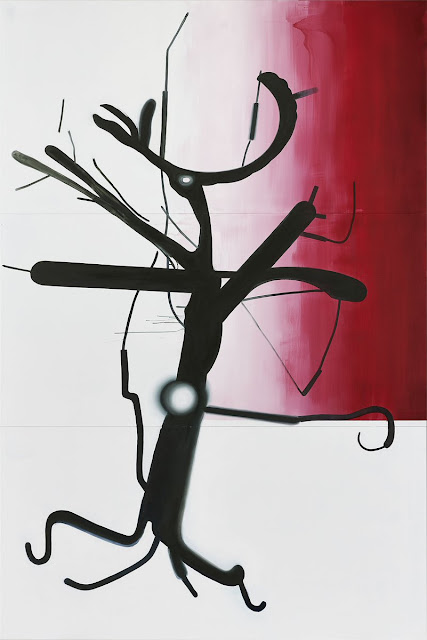 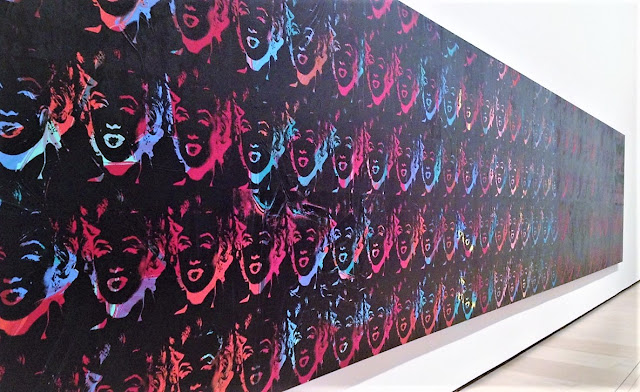 The Guggenheim’s spaces are very large, so to see one containing just one painting per wall was striking: the three fully available walls were occupied by exceptionally wide horizontal format works by Rauschenberg, Rosenquist, and Warhol. One Hundred and Fifty Multicolored Marilyns, 1979, is well over ten metres wide. It’s a dark, obsessive and gestural reversal reprise of the icon, making it seem all the more emotionally engaged with its creator’s thoughts of his own death. 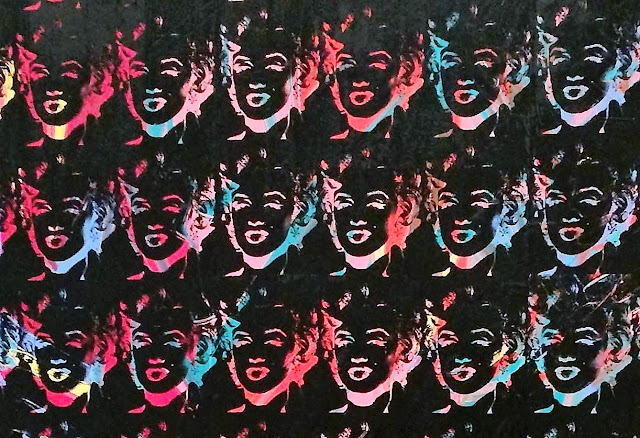 Most Double-Edged Echo of the city 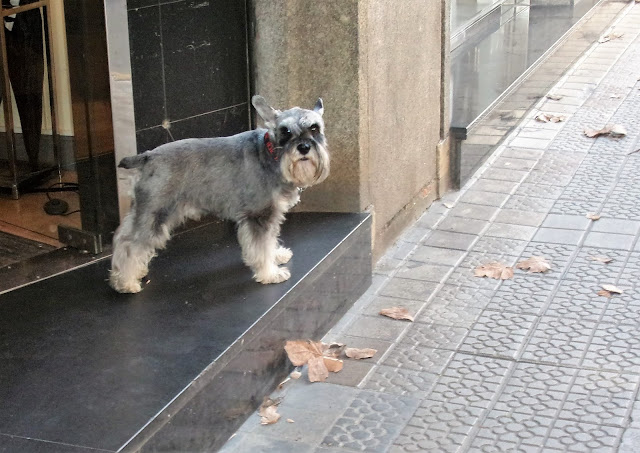 Strolling around Bilbao, I noticed was that the Basques love small dogs – I lost count of the poodles and chihuahuas. So perhaps it makes sense that Puppy, 1997 – Koons’ iconic West Highland terrier made of bedding plants – sits outside the Guggenheim, mixing up topiary, dog breeding, sentimental greeting cards and art. On the other hand, its scale (43 feet tall) seems to cock something of a snook at the local preference for miniatures. 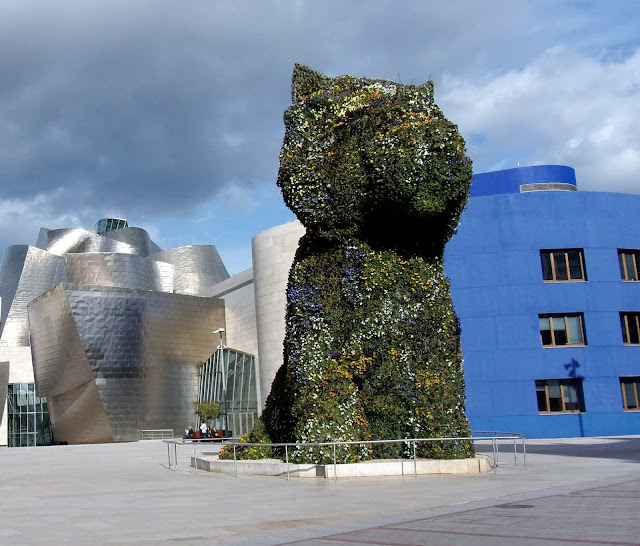 Best View Through A Public Sculpture 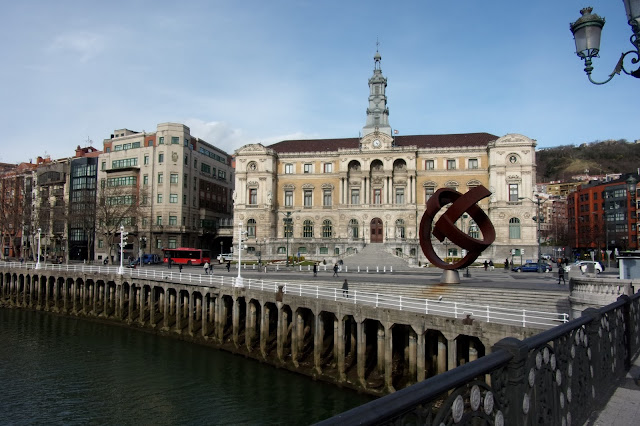 Notoriously fiery artist and theoretician Jorge Orteiza (1908–2003) spent 1935-47 in South America either side of his Basque years and taught the more famous Chillida  (but fell out with him for 30 years from 1967 before a late reconciliation). Orteiza is known for his small works, well represented in the Museum of Fine Art. However, this public sculpture Ovoid variation on the emptying of the sphere is a rather successful later scaling up of a 1958 sculpture which makes use of his characteristic interest in emptied forms to ‘capture’ the town hall’s tower from some angles. 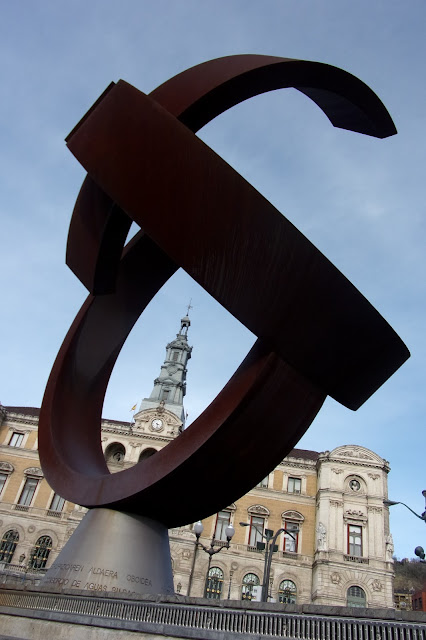 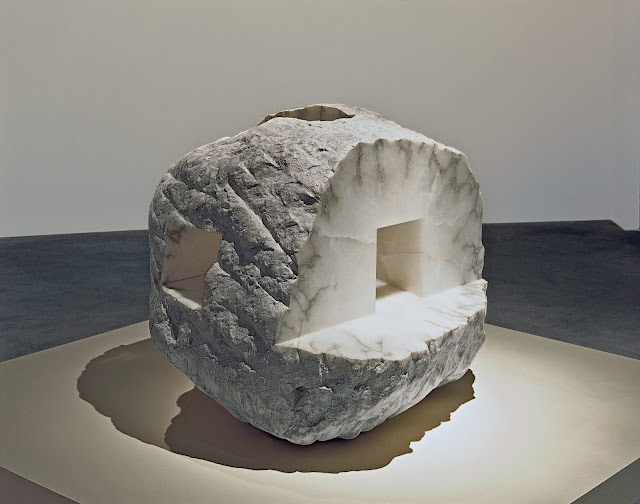 Eduardo Chillida (1924 – 2002) is probably the answer to the quiz question: which famous artist was the best footballer?He kept goal for Real Sociedad before knee injuries ended his career. There’s plenty of his work around Bilbao and in its museums. The Guggenheim’s alabaster How Profound Is the Air, 1996, shows him, like Orteiza, as an architect of the void.  it contrasts nicely with Meeting Place IV, 1973, a more opened-up hanging structure of cast concrete. 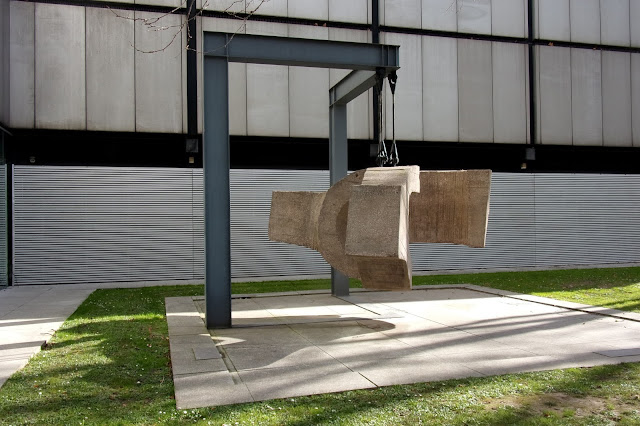 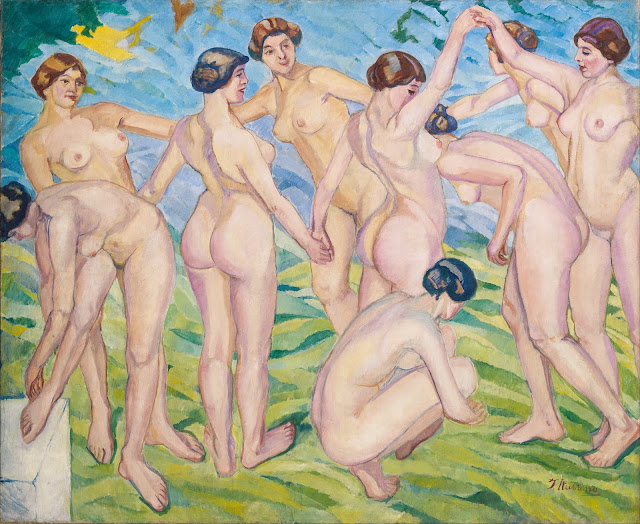 Bilbao’s Museum of Fine Art features a comprehensive overview of Basque artists, If, like me before my visit, you could only ascribe Chillida and Orteiza to that category with any confidence, then that full overview pretty much explained why no-one else has come to prominence. All the same, I was somewhat drawn to Francisco Irurrino, (1864-1924) who travelled to Morocco with Matisse and arrived at a tightly organised blend of Impressionism and Fauvism. The vibrant Nudes (Women Dancing in a Ring), 1916-18, seems, interestingly, to construct a landscape space around the figures rather than setting the figures in the landscape.
Unexpected Masterpiece 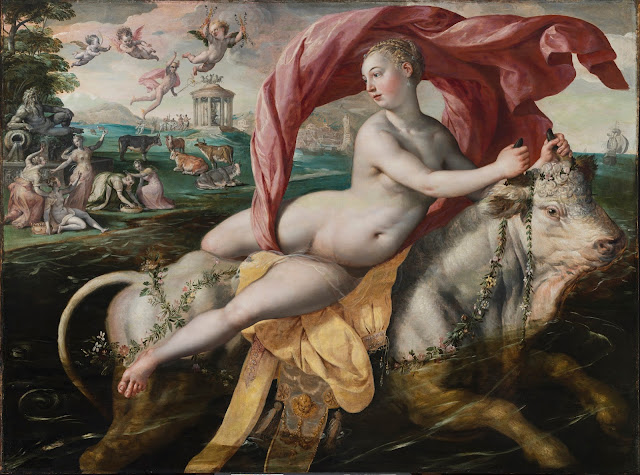 Sticking with nudes in the Fine Arts Museum, Belgian Martin de Vos (1532-1603) excels in The Rape of Europa, c 1590, in which the Phoenician princess, who plays on the shore in the background, seems very relaxed about being abducted by Jupiter in the form of a bull. De Vos, who went to Italy with Pieter Brueghel the Elder and worked in Tintoretto’s studio, combines flowing colour movement with pellucidly lit flesh.
Most Ludicrous Frame 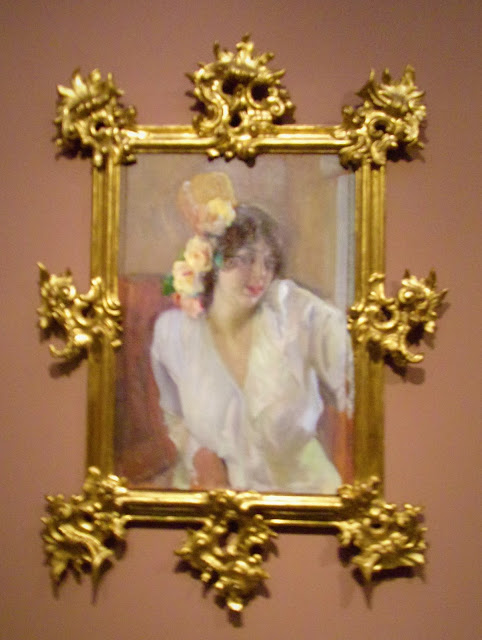 The Museum of Fine Arts’ also holds  Young Woman, 1914 by the Valencian artist Joaquín Sorolla (1863-1923): a modest portrait totally dominated by its frame, which seemed to be echoing the subject’s flowers with an extravagance out of all proportion.  Perhaps a deeper point was being made, but I couldn’t think what it might be…
Best Shows Not Seen 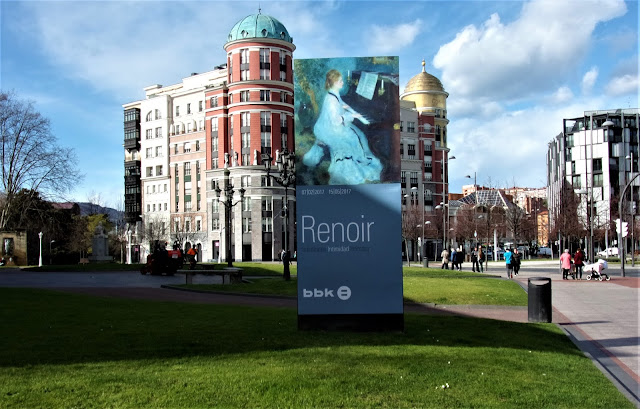 I was a couple of days too early for what sounded an impressive survey of intimacy in Renoir. No matter, I decided to explore the city’s small clutch of commercial galleries before catching the evening flight – only to find that the standard gallery hours are 11-2 and 5-9, which makes plenty of sense but caught me out. I did catch a glimpse of Isabel Garay’s exhibition of sculpture through the door of the Vanguardia galleria, and it looked good enough to wish it had been more fully viewable. 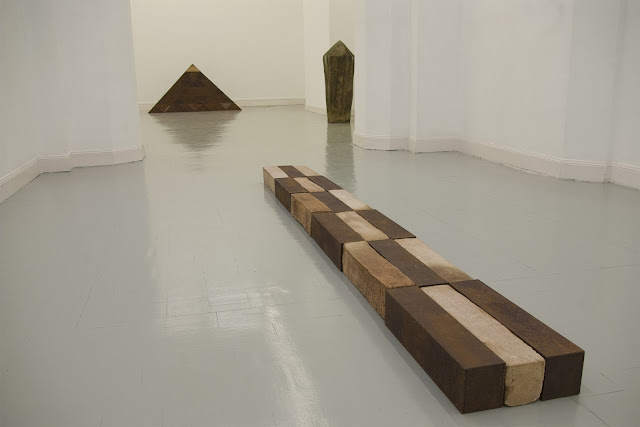