The catalogue for the new Bill Viola show at the Royal Academy – also featuring a group of Michelangelo’s best, most finished drawings – is careful to point out that it is not really proposing a rivalry, or even a close kinship, between the two artists. Just as well: Viola is undoubtedly one of the giants of contemporary art, but – reputation-wise and influence-wise – he is not quite as big as that.

I think that, of all the artists of his generation, he is undoubtedly one the most interesting – ELS

What the exhibition raises rather sharply is the different ways in which we now look at art. The show, subtitled ‘Life Death Rebirth’, converts the R.A.’s main galleries into places of portentous darkness, where Viola’s artworks, videos and projections of various kinds, supply splashes of light. There is also splashes of light, not too bright but bright enough to illuminate the drawings by the great Renaissance master, and there is illumination (flattening in this case rather than flattering) for Michelangelo’s Taddei Tondo, which normally lives in a different part of the same building. The difference is not only one of scale, the drawings are very small compared with Viola’s looming images, but also a matter of the way in which you look. 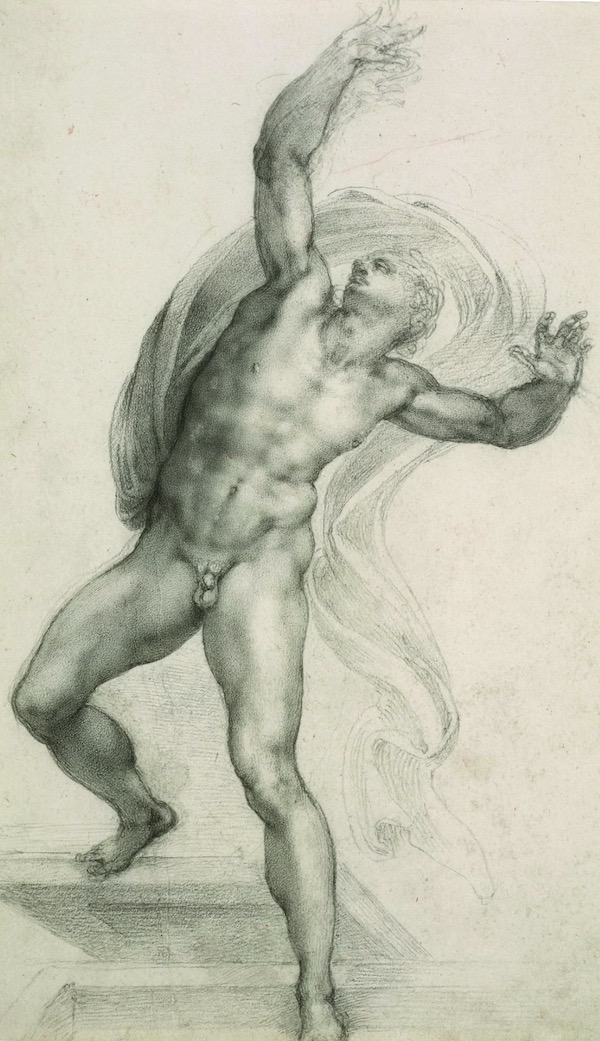 You can look at the drawings for as long as you like, or as short a time as you like. You can fix your gaze on them, then turn away, then go back to them. This is the way in which audiences have traditionally looked at works of visual art. With Viola’s work, you can’t do that. The images are in a perpetual state of becoming.
In many cases, the catalogue for the show tells you exactly how long this cycle of change is going to last. For example, in the case of a pair of images called ‘Man Searching for Immortality/Woman Searching for Eternity,’ the duration is 18 minutes, 54 seconds. I wasn’t surprised when I went on an ‘ordinary’ day – a busy Saturday morning – to find so many of my fellow-visitors sitting on the floor. I had to be careful to avoid tripping over them in the cavernous midnight spaces of the show.

And, since I didn’t buy the handsome catalogue until I got out, I had no idea at that point how long each of these mysterious presentations was going to last. I certainly missed the important bits of one or two. If the image didn’t grip me immediately, instinctively I moved on – to another dark space that might contain something that fascinated me more. I couldn’t turn the clock back and look again, as I did from time to time with the drawings.

Basically, the R A event is a child, not of the great fresco cycles of the Renaissance, but of a fairground magical/mystery tour. If you see something good (Michelangelo’s contribution apart), it is promptly snatched away from you.

Don’t get me wrong here – I have great respect for Bill Viola and his work. I think that, of all the artists of his generation, he is undoubtedly one the most interesting. I’ve never had the luck to visit James Turrell’s Roden Crater in Arizona, which is still a work in progress, but that might surpass – perhaps – what Viola is trying to do here in London, which is to give a modern audience a sense of the cosmic. Which is also what Michelangelo tried to do with the Sistine Chapel. In that sense pairing him with Viola does make sense.

The problem, to put in bluntly, is that the technical means are still too crude. What Viola wants to do at the R.A. will I think become more available soon but in a radically different form. It is, in fact, becoming quietly available now, as exemplified by the modest Virtual Reality show We Live In An Ocean of Air recently on view at the Saatchi Gallery. With Virtual Reality you don’t just witness the event – you become part of it and interact with it. And others all over the world can become part of it with you. With videos in gloomy halls, you’re not included. You remain, in an important metaphysical sense, outside.