Located at the corner of Princes Street and Lothian Road under the watchful gaze of Edinburgh Castle, the silent, shadowy calm of this church provides an evocative location for work by an artist who consistently explores such universal human experiences as spirituality, birth, and death.

The piece is ‘Three Women (2008)’ which has been shown previously in an ecclesiastical setting – St Peter’s Cathedral in North Adelaide – and has most recently been on display in the Grand Palais, Paris and the Guggenheim Museum in Bilbao. Heather L. Robinson suggested that, at St Peter’s Cathedral, the work sat ‘so comfortably within the reverent intimacy of the Lady Chapel that it could have been created for the site, as Viola’s ‘The Martyrs (2014)’ was created for London’s St Paul’s Cathedral.’ Viola’s two permanent video installations for St Paul’s Cathedral, London, ‘Martyrs (2014)’, and its companion piece, ‘Mary (2016)’, symbolise some of the profound mysteries of human existence. One is concerned with comfort and creation, the other with suffering and sacrifice. They are the first art commissions of their kind to ever be installed in one Britain’s most famous religious spaces. 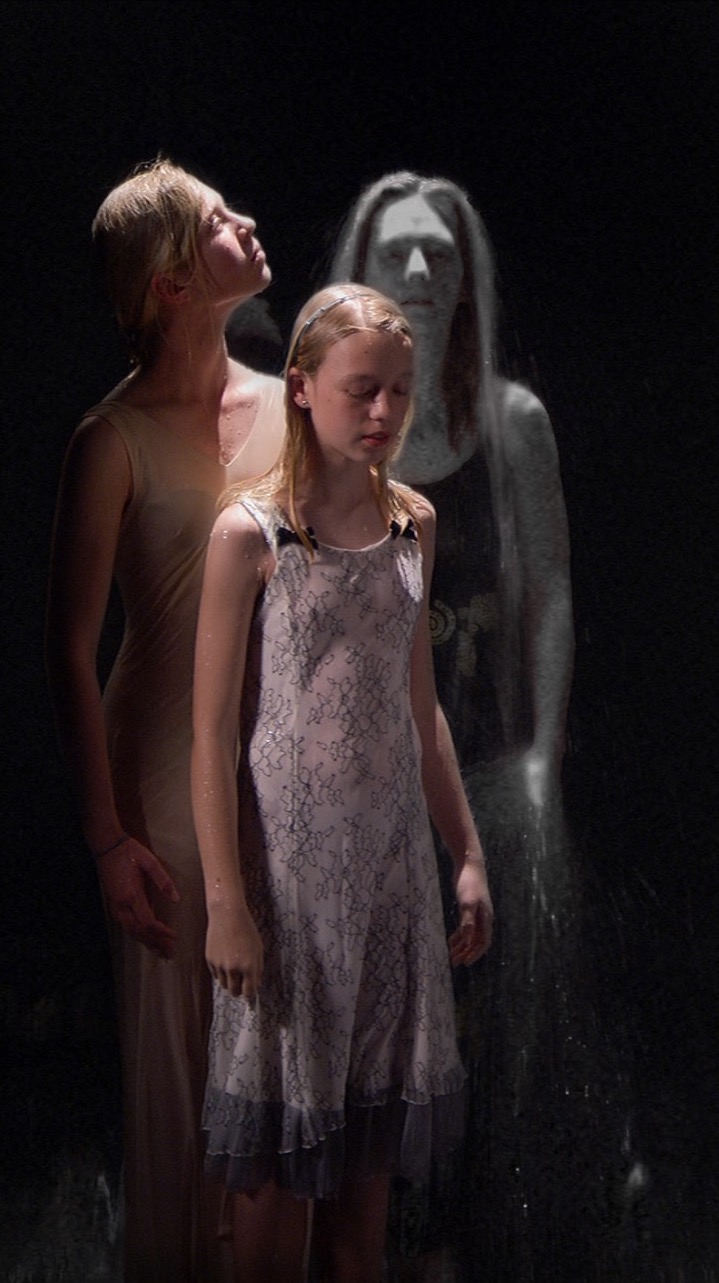 Other acclaimed works by Viola for sacred spaces include ‘The Messenger’, a special commission for Durham Cathedral in 1996, ‘Ocean Without a Shore’, premiered in the 15th century church of San Gallo at the 2007 Venice Biennale, and the video triptych ‘Study for The Path (2002)’ donated to one of Milan’s historic churches, Basilica di San Marco, in 2008. St Cuthbert’s now joins this list of sacred spaces which have appreciated the quiet contemplative nature of Viola’s work.

Viola has said that his works ‘function both as aesthetic objects of contemporary art and as practical objects of traditional contemplation and devotion.’ His images are presented simply like moving paintings and frequently evoke mystical or religious experience. Viola has been influenced by Western and Eastern art history and spiritual practices, including Zen Buddhism and Christian mysticism. Jonathan Jones claims that Viola ‘is one of the most important artists of our time because he has the bravery to engage with these big questions, and the clarity to do so in a universally compelling way.’

The Chancellor of St Paul’s Cathedral, Mark Oakley has said that: ‘Bill Viola’s art slows down our perceptions in order to deepen them. He uses the very medium that controls mass culture today, film, and subverts that control to instead open up new possibilities and contours of understanding.’ Rachel Halliburton, who suggested the St Paul’s commission, has noted that Viola has ‘spent a long time studying the representation of the extremes of human emotion, specifically in 15th- and 16th-century religious works of art’ and often presents his works as if they were Renaissance paintings. She has said that, despite their intellectual origin, the best way to experience the videos is as ‘unselfconsciously as possible’ by standing back from the explanatory notes and immersing yourself viscerally in what is taking place before your eyes.

Transfiguration is generally defined as being ‘an exalting, glorifying, or spiritual change.’ In Viola’s work at St Cuthbert’s, a mother and her daughters enact a transfiguration when they choose to pass through the threshold of water and briefly enter an illuminated realm.

Robinson notes that ‘Viola’s figures are lit and coloured with a classical Renaissance ecclesiastical palette – the mother in blue, the virginal daughters in white.’ She describes a screen which is initially filled by static interference, ‘the black and white pixels creating a fog of interference similar to the scratches and haze of ill-preserved silent motion pictures.’ It is from this ‘electric mist’ that the three females emerge. ‘They walk slowly and deliberately toward the viewer until they pass through an invisible screen of water,’ crossing the boundary ‘in order of age and experience, like a rite of passage, reborn in glistening technicolour.’ The women seem ‘unperturbed but slightly alienated by their new surroundings, observing and slowly turning to re-merge with the darkness’ in movements which ‘are considered and deliberate’.

Viola has said that the form his interest in the spiritual side of things has taken has been, in a very quiet way, to simply look with great focus at the ordinary things around him that he found wondrous. His works ask us to do the same.

Read More by this Writer