Billy Childish has been around a long time. He is not only an artist but a poet and a composer of music. He was also at one time in the dim long ago Tracey’s Emin’s mentor, a connection that she now seems increasingly inclined to try and erase from the record.

I serve the needs of the painting, not my ego – BC

It was indeed Tracey who gave the Stuckist Movement its name, even though Billy was never a member, by yelling at him when they broke up: ‘The trouble with you, Billy is that you’re stuck! Stuck! Stuck!’. Billy now denies all connection with Stuckism, though adherents to this now widespread movement admire him. 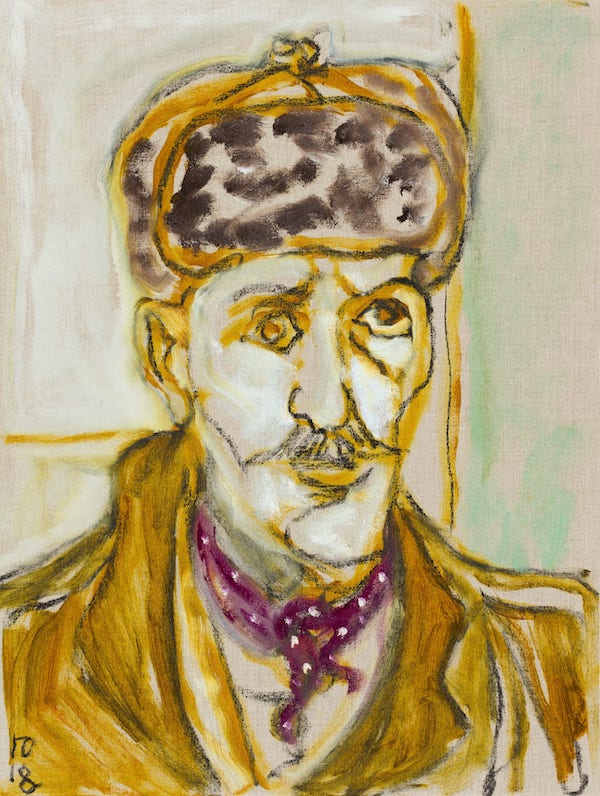 Yet he does have links to aspects of the Modernism of the quite remote past. Indeed, though Tracey now seems to deny this, it is clear that Billy Childish was responsible for introducing her, at the time when she was his protegée, to the work of the Norwegian Early Modernist Edvard Munch, which has been a major influence on what she has recently produced. Munch has also been influential on Billy’s own production.

The current situations of these once-colleagues are fascinatingly different. Emin is now big deal here in Britain: Royal Academician, represented in London by White Cube, one of the few British-based dealers who are able to compete with the likes of Gagosian and Pace. She is much less well-known abroad, though her current show at the RA will in due course move on to the Munch Museum in Oslo.

Billy, who lives in Kent, doesn’t have a big-name gallery representing him in London – though he is represented in Britain by an outfit called the Carl Freedman Gallery, with whom he had a solo show in London in 2016, also the year in which he had a retrospective at the Rochester Art Gallery in Kent. The Carl Friedman Gallery, however, has recently removed itself from London to Margate. In addition, there have been other British shows at The Historic Dockyard in Chatham, and at the ICA here in London. Nevertheless, Billy seems to be more widely known outside of the UK than Tracey. Currently, he has an exhibition called skulls, wolfs, nudes, rope pullers and a nervous breakdown at a Berlin gallery called neugeriemschneider – his fifth with them. Neugeriemschneider represents some big names.

During the past decade Billy has also had one-person shows at all of the following: The Goss-Michael Foundation, Dallas; Villa Kunst- und Kulturstiftung Opelvillen, Rüsselsheim; Neuer Aachener Kunstverein, Aachen; the Galleria Palolo Curti, Milan, Lehman Maupin in both New York and Hong Kong; International Art Objects, Los Angeles; Gallery Hyundai, Seoul; and White Columns. New York. It is worth pointing out that Germany, where a number of these exhibitions took place, and where Billy’s main commercial dealer is located, is now very much a forum for fully international artists. At least as much so as Britain.

Judging from the work now on show in Berlin, Billy Childish is also a more varied artist than Tracey. As the gallery hand-out notes, there is a range of subject matter: ‘Imagery of wolves moving at night, manual labourers and nudes cast an eye on the timeless present.’ However, as with Tracey, there are quite a lot of self-portraits. Where, as the hand-out also tells one, the images ‘respond to a period of psychological struggle’. Tracey isn’t the only contemporary artist who feels a compulsion to look in the mirror.

Billy Childishs’ artist’s statement is quite frank about this:

“With no forward planning, I begin to paint. The purpose and process are one: to find out what the painting wishes to be and what it might reveal to me. I get out the way and allow. I serve the needs of the painting, not my ego. Any meaning or psychological aspect that comes forth comes from the collective unconscious. The unconscious wishes to say hello and become integrated. In this way, the painting comes into being.”

The key phrase here, however, is this: ‘I serve the needs of the painting, not my ego’. This show is not, from the evidence on the web, a claustrophobic event, not for the artist and not for the viewer. And I suspect the effect is the same in real life. I hope a major London dealer does a big show with Billy Childish fairly soon.