Black Mirror presents itself as ‘Art as Social Satire’, and there is indeed a real black mirror in the show. Made of coal, it is the work of the Chilean artist, Alejandra Prieto. As with a number of other items included, it is not wholly easy to see how directly it relates to the announced theme of the exhibition.

This is, however, an event that is a good deal better, also a great deal more entertaining, than the self-conscious displays of civic virtue now being offered at the Tates. What it seems to relate to most directly, in other offerings current or just past on the London art scene, are the various exhibitions we’ve recently had that have concerned themselves with the artistic and social consequences of World War I, very often directly with the art produced during the Weimar years by artists from a defeated Germany. In fact, come to think of it, it might be a good idea to visit Tate Modern’s still current Magic Realism: the Weimar Years in Germany before visiting this exhibition., just to put yourself in the right historical context. 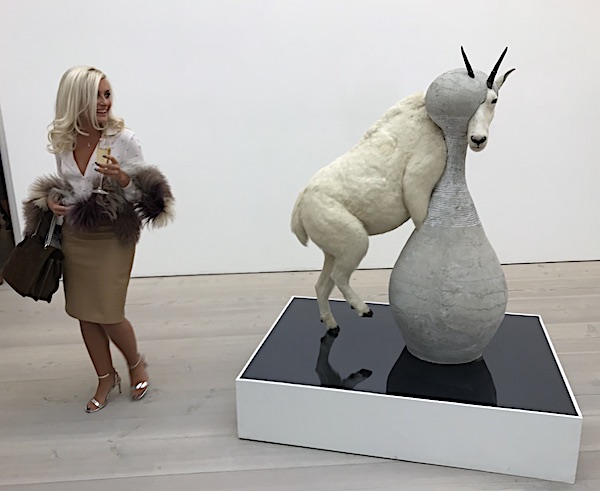 There is, in comparison with the Tate show, a lack of established great names. Also, thankfully, the atmosphere at Saatchi is by no means so gloomy as it tends to be at Tate. What comes rather aptly to mind is a pair of lines from Jonathan Swift’ Verses on the Death of Doctor Swift:
‘Then hug themselves and reason thus:
“It is not yet so bad with us,”’

What seems to be reflected here is a society on the brink of possible catastrophe, rather than one in the midst of actually experiencing it.

What the exhibition does is to mingle, often successfully, the serious and the playful. One of my favourite pieces in it is a life-sized sculpture by Steve Bishop entitled. It’s Hard to Make a Stand. This represents an indeterminate sort of beast, basically a horse, whose body is draped in a wisp of transparent blue fabric, and whose leonine head has been formed out of a complete fur coat, skilfully folded and draped. It skewers a certain kind of luxury lifestyle, without the need for a single word. It is accompanied by another sculpture, also life-sized, that consists of a taxidermied mountain goat, melting into a huge flask. The title? A well-known slogan, used for advertising luxury perfume – Christian Dior – J’Adore. Goats do tend to smell a bit, of course.

Equally effective, in a very different way, is a large graphite on paper drawing by Dominic McGill, entitled Muquaddimah. Teeming with inscriptions and figures, this seems to illustrate and satirise the current tensions between the Islamic world and the West. It certainly fascinates people. I visited the gallery on two quite separate occasions, and there were always spectators there determined to puzzle it out. I wasn’t surprised that they were fascinated. I was too.